Gear Chronicles: Bumpers and a Winch Can Make All the Difference

My buddy Winslow has been a lifelong Jeep enthusiast. When I first met him in 2006, he drove a highly modified Cherokee XJ that he bought as a teenager. Nearly every weekend, he and his buddies go wheeling and camping. When something broke on his XJ, he’d replace it. Over the years, Winslow cobbled together quite the enviable budget-friendly adventure rig.

Over the years, however, Winslow’s tastes changed. He sold his XJ, moved to a new town, and got a new job. Well, it wasn’t so much that Winslow changed. Rather his income increased and he got married. With a bit more money in his pocket, he was able to afford a newer Jeep, a 2017 Wrangler Sport JKU.

Although he had a new, fancier rig, he now has his wife’s discerning taste to consider with any proposed modifications to their new Jeep.

Unfortunately, this left him rolling around in a stock rig — fine for most folks. But, in order to join me on my overland adventures, Winslow needed a bit more than stock. Fear of damaging the rig and facing the justified wrath of his wife, held Winslow back from more than a few journeys. 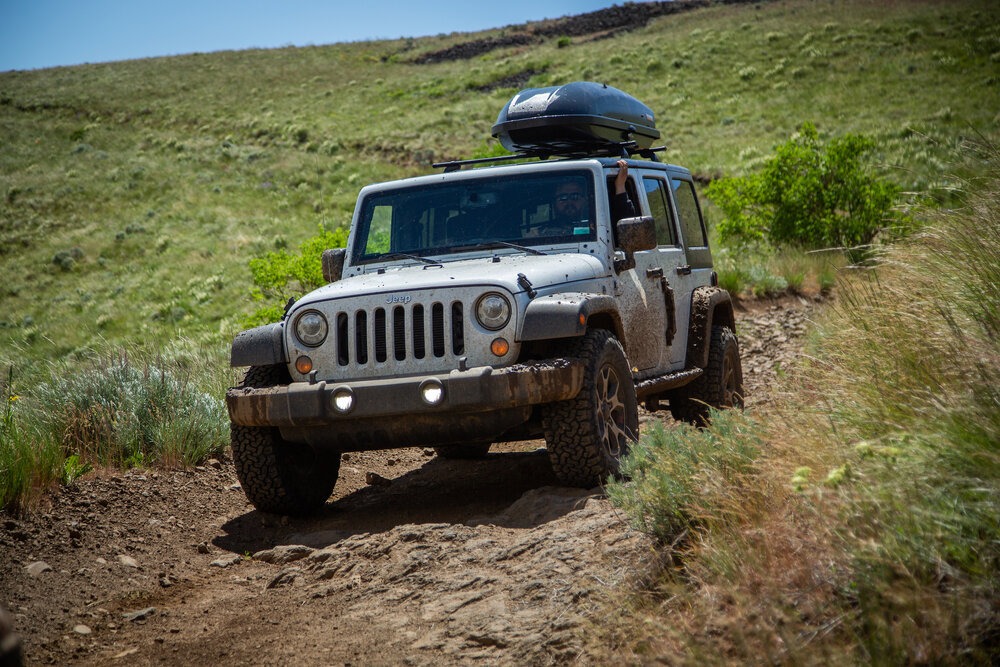 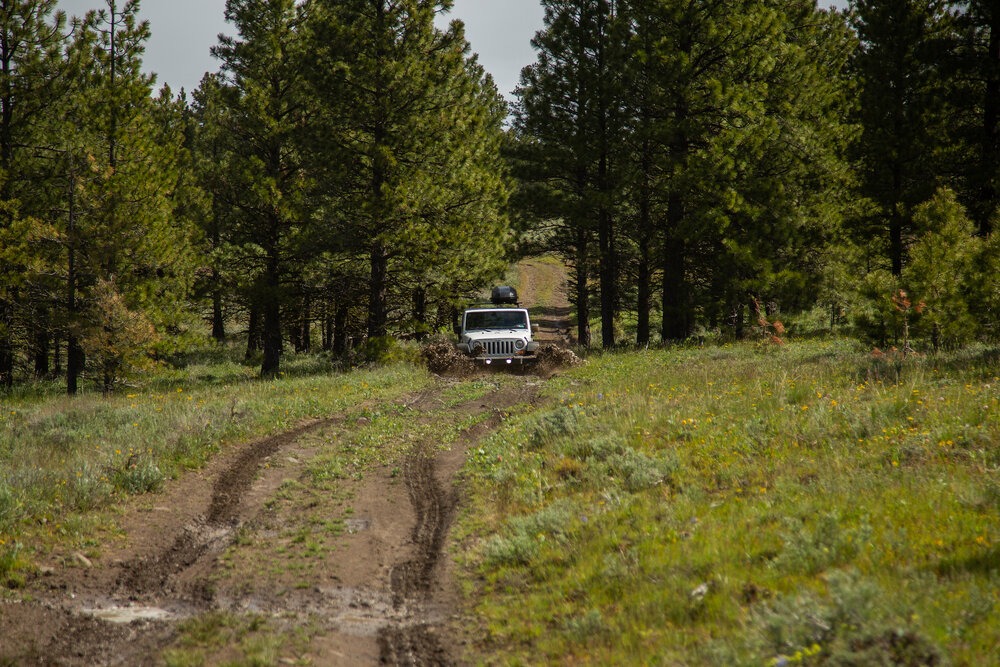 This fall, Winslow and I were finally able to convince his wife to let him replace the front and rear bumpers on the Wrangler with some tasteful but stout Rugged Ridge HD Series full-width bumpers — and a winch to match.

To christen the bumpers, we headed out on a quick four-day overland trip in the Oregon backcountry, through the southeast corner of the Deschutes National Forest, over into Christmas Valley, through its sand dunes, and finally over into the Lost Forest.

He may never admit it, but I think deep down Winslow was sort of hoping he’d break something on the JKU, so that he could continue the build — à la his XJ.

Salt of the Earth

I’ve known Winslow more than a decade now. He’s the salt of the earth kind of people. For example, if your truck broke down in Nevada, he’d hop in his rig and drive through the night from his home in Washington to come rescue you without a second thought. He’s just that kind of guy. And I love him like a bother. He also drives me a bit nuts like a brother.

His objection to change is mind boggling to me. Winslow likes things the way the used to be — especially Jeeps. My Gladiator JT, with its newfangled technology, is a bit distasteful to him. This is why he bought a JKU as soon as the Wrangler JL hit showrooms: Because it was the last of the true-to-form Jeeps — or so he said.

Given Winslow’s aversion to newness and his wife’s refusal to drive anything that looked “stupid,” finding bumpers that were suitable to both their tastes was tough. We eventually found some that checked all the boxes. 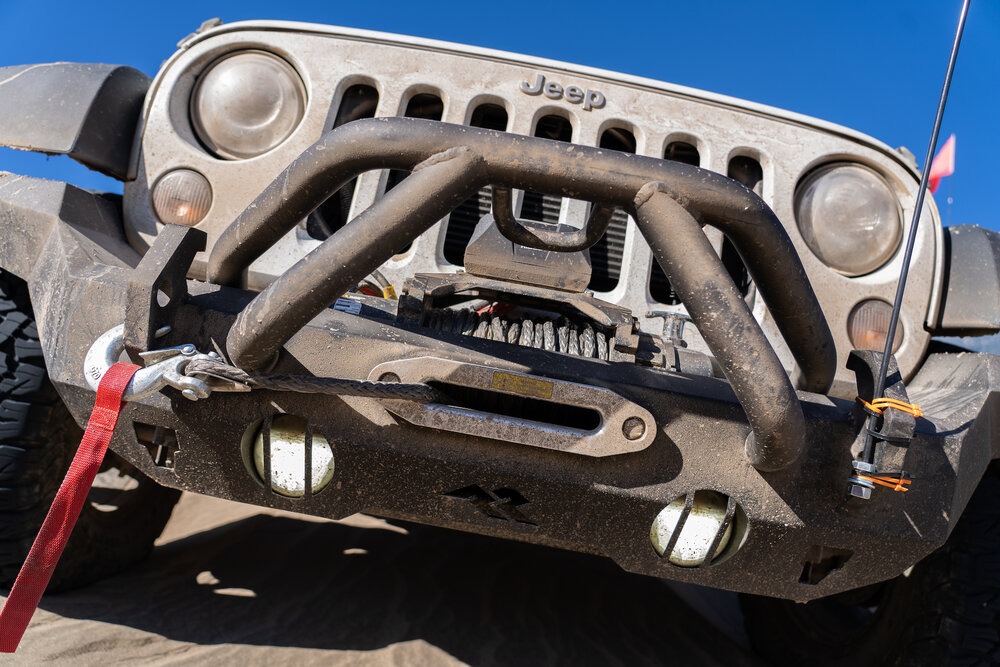 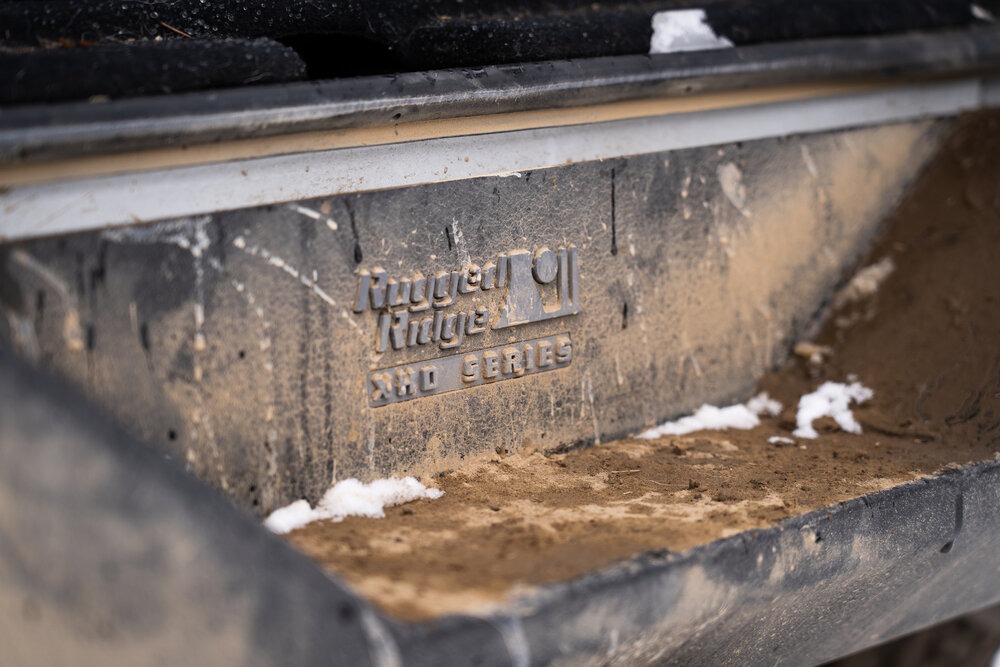 For the front, we went with the Rugged Ridge HD Series front bumper (with optional front bar). And for the aft end of the JKU, we opted for the XHD rear bumper. Nestled inside the HD front bumper, I twisted Winslow’s arm into picking up a Rugged Ridge 12,500-pound Trekker winch with synthetic rope and wireless remote.

Initially, Winslow balked at the Trekker with synthetic and wireless remote because, you know, it wasn’t traditional. Steel rope was good enough for ranchers Winslow grew up around. So, he felt he didn’t needed synthetic. What’s more, wireless added undue complexity to the unit, Winslow wagered.

He later change his tune.

Back in May, I invited Winslow to join me for a journey along a portion of the Washington Backcountry Discovery Route. His rig did well, climbing most things I personally may have been shy about throttling a bone-stock JKU over. But without front and rear protection, or a winch, he wasn’t as gung-ho as he could have been. I could hear the trepidation in his voice over the radio. 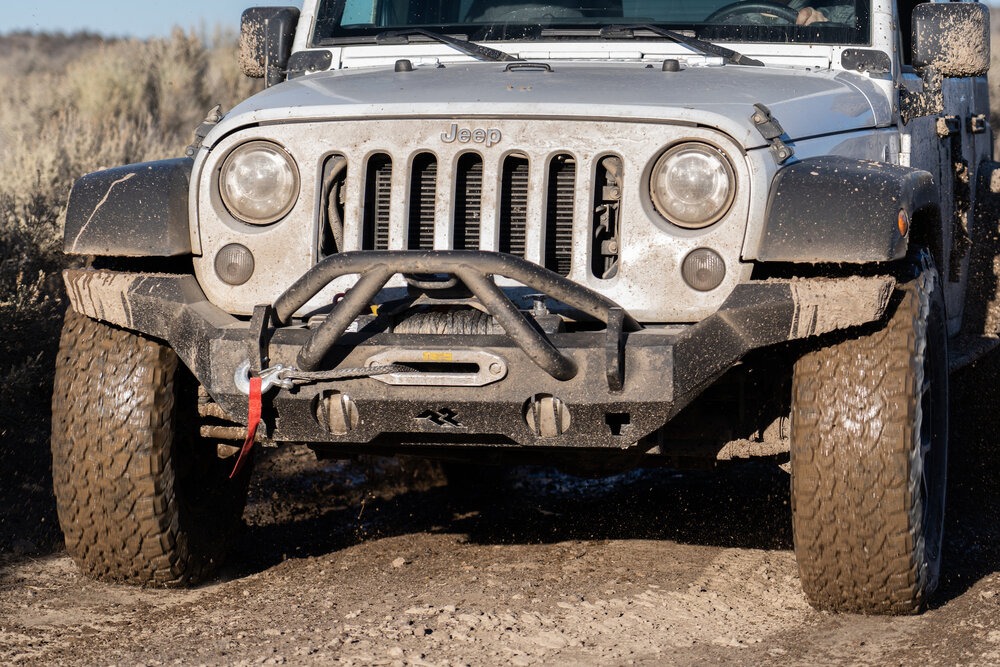 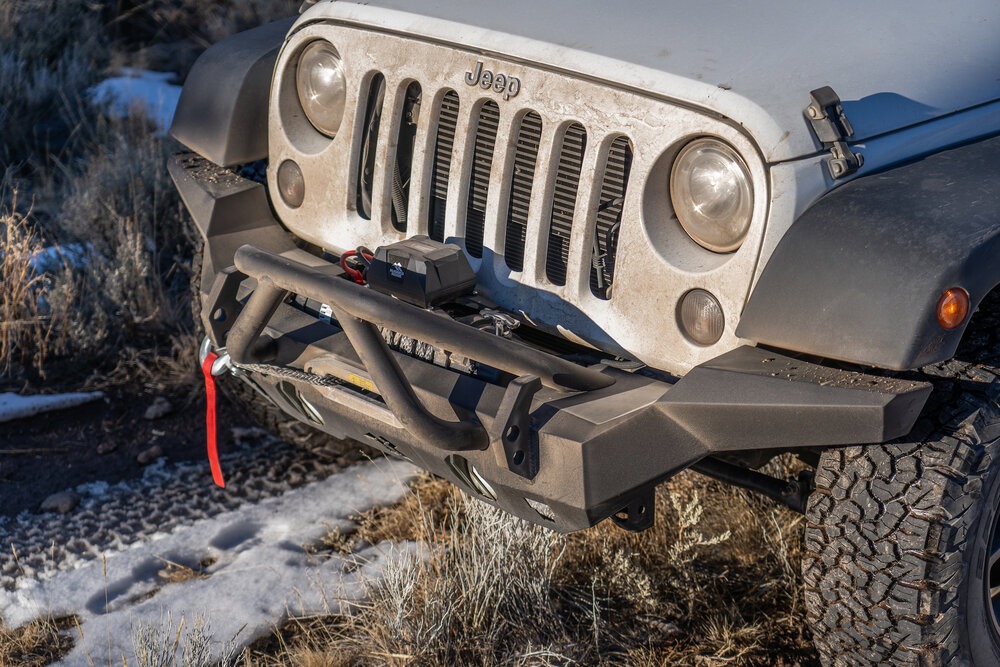 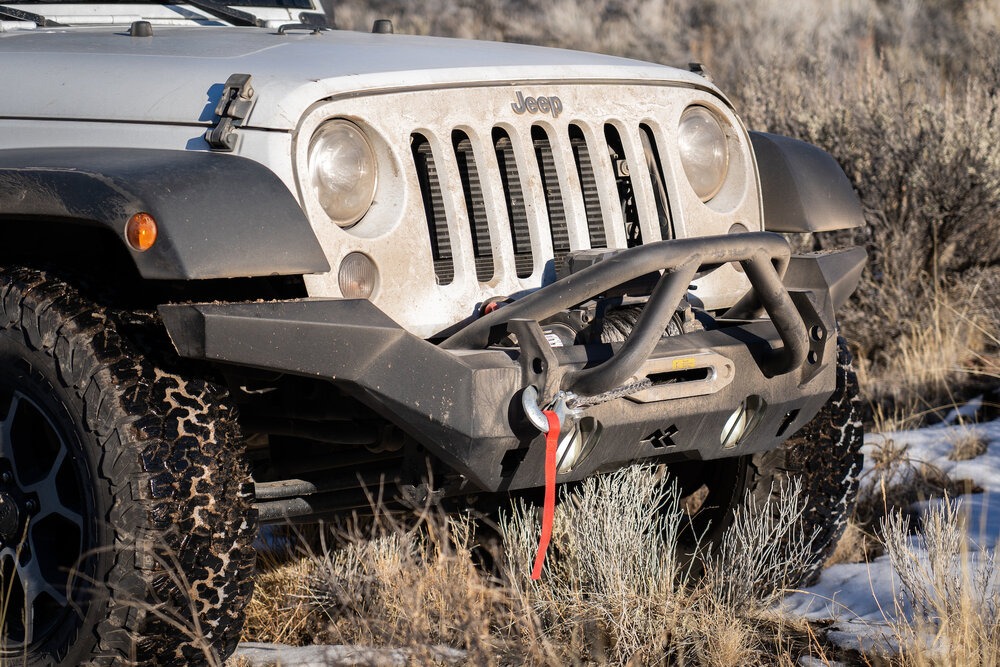 This time was different, though. He was armored up and ready to test his mettle — and his rig’s metal (sorry not sorry).

For this excursion, we found ourselves traversing virtually all conditions in one single trip, from mud to rocks to sand to snow. I’d like to say this was planned, but it wasn’t. Oregon just threw everything it had at us.

The first day was mostly mud, as we zigzagged our way through the rain-soaked dirt roads of the Deschutes. This was nothing that a pair of bumpers couldn’t handle.

We took an opportunity during a break in the rain to stretch the synthetic rope on Winslow’s new 12,500-pound Trekker winch. This is an essential step for any winch owner.

Whether steel or synthetic, the rope on your winch comes loosely strung around the winch drum. If you were to pull anything like this, you’d run the risk of the taut portion of rope cutting down on top of the layers below, pinching them and thereby binding it all up — putting a swift end to your recovery and the chance of damaging the rope. 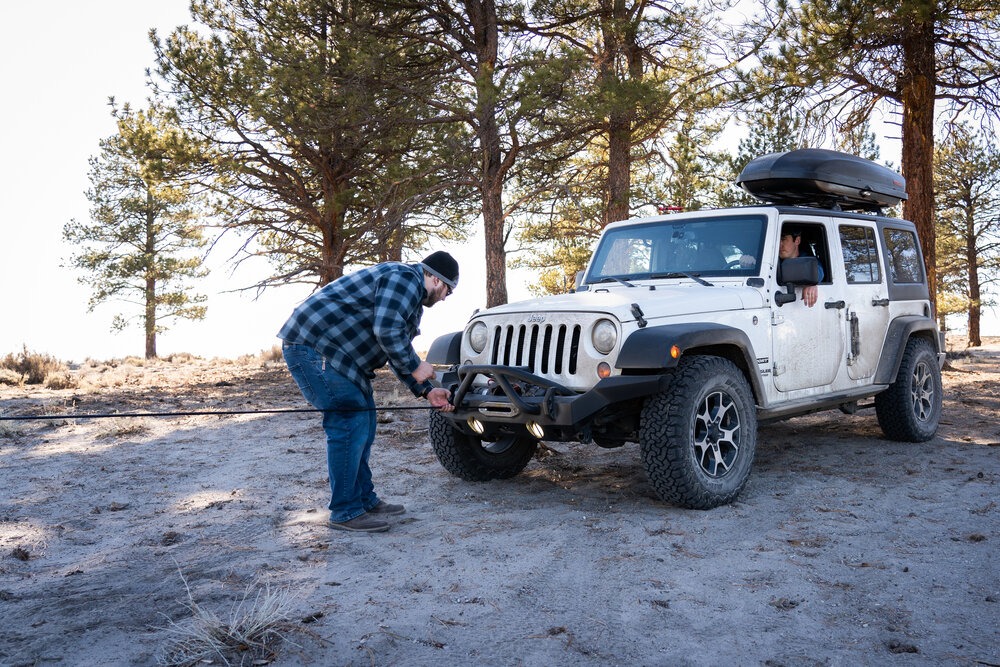 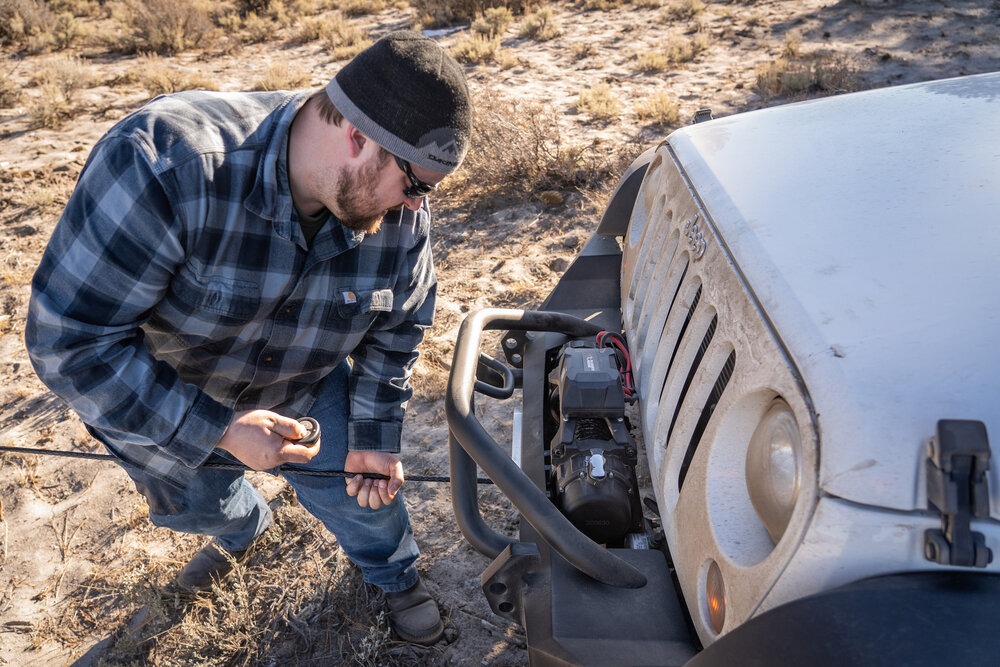 Before you use your winch for the first time, you want to unspool the rope down to the last five or so coils, and roll it back in with tension — three to four clicks of your emergency brake on flat ground should do the trick.

The second day, however, was a bit different than the first. We’d sloughed off the rainy region of the state and into the more arid region. Heading into Christmas Valley, we ascended dozens of rocky hill climbs. This was the first chance Winslow had to tackle something without fear of damaging his stock plastic bumpers — we almost relished the idea of bouncing his new bumpers off some boulders. 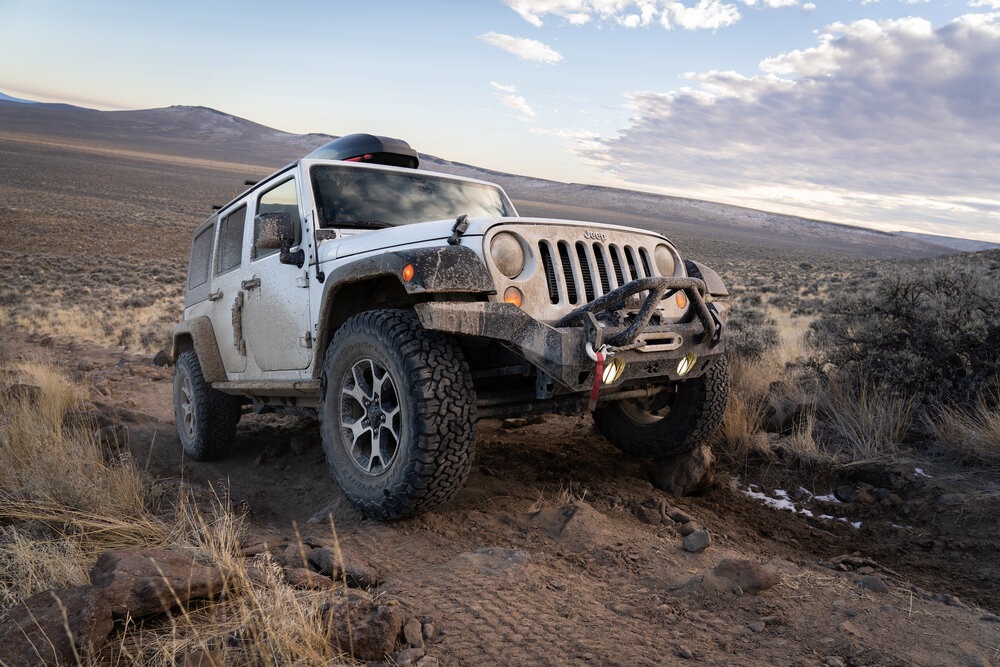 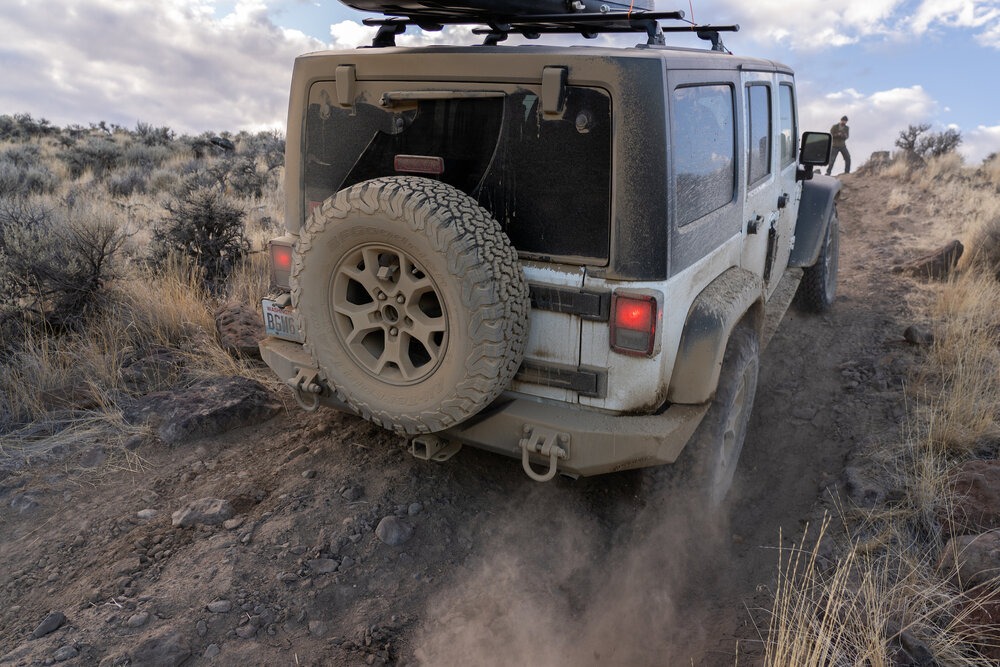 Winslow has been driving off-road for more than two decades. This meant he expertly piloted his rig up over and around boulders with precision; we didn’t get to watch Winslow slap freshly painted steel against volcanic rocks. But he did scrape a couple times. It’s a good thing he had those HD Series bumpers, because his wife would have been mighty miffed if he’d scratched the stock ones.

The third day, we ventured out onto the sand dunes of Christmas Valley. Here, we really got to see the bumpers pay for themselves.

Since his JKU Sport is still riding on stock suspension, it’s sitting pretty low, which diminishes his rig’s approach and departure angles. Ascending and descending steep dunes, Winslow dug and scraped his brand-new bumpers into the sand. But, this is the kind of abuse they’re made for. They came out unfazed.

Winslow and I hoped to get him stuck enough in the sand that we’d have to extricate him from the dunes with his new winch. We had no such luck, unfortunately. 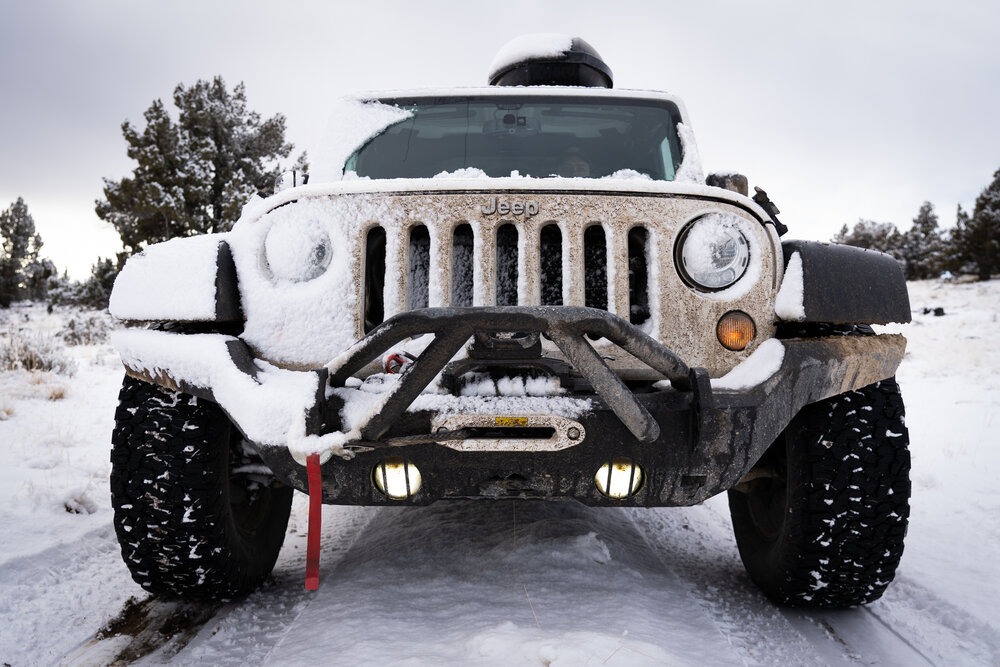 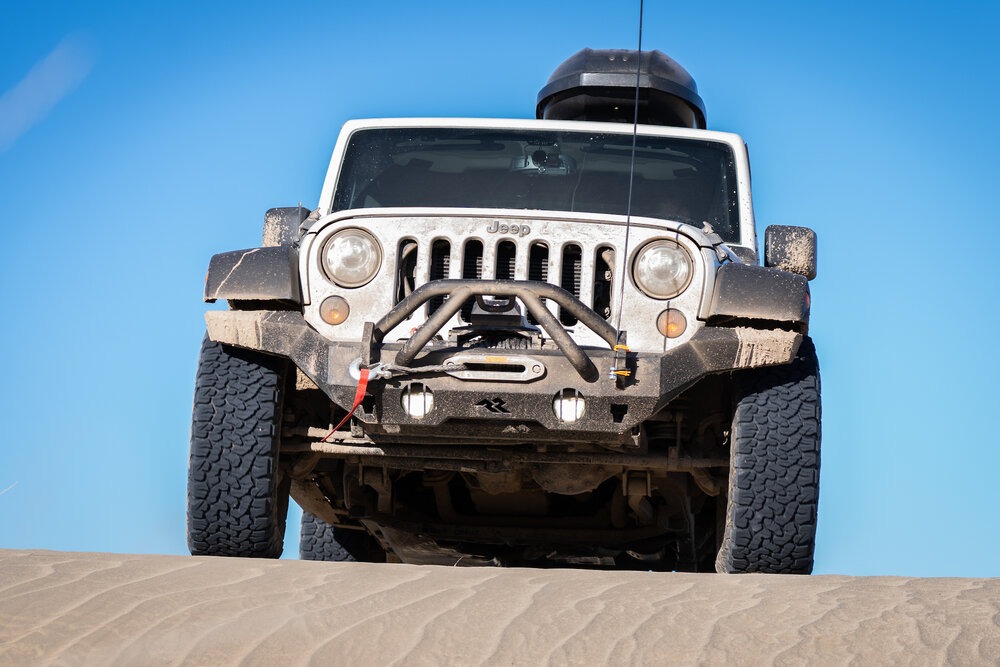 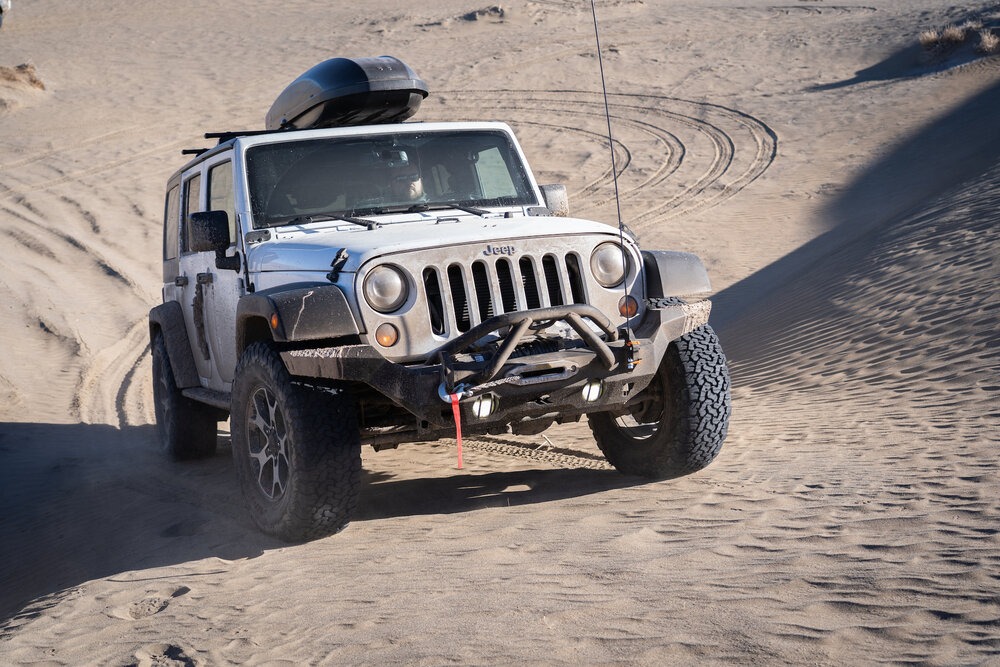 The seasoned off-road driver he is, Winslow knew how to keep momentum up and continually find traction in the soft sands.

Finally, on the fourth morning, we woke up to snow. While the snow didn’t impact the bumpers at all, they definitely gave Winslow the confidence to keep up with the rest of the convoy of fully modified rigs. Should he get stuck in a drift or ditch, we wouldn’t risk much damage to his Jeep. And furthermore he could pull himself back onto the road, if he did slide off.

The Bumpers (and Winch)

I’ve owned my fair share of 4x4s — each with their own set of steel bumpers and accompanying winches. I’d not ever had any experience with Rugged Ridge products before, though. I was keen to get my hands on the components and get a sense for their design and build quality.

I was especially impressed with the design and construction of the HD full-width front bumper. It is designed to retain the factory fog lights and protects them behind a couple guards. It also has two spots for a hi-lift jack. Perhaps the smartest features are the recovery hooks that have been drilled to accommodate both 3/4- and 7/8-inch D-shackles.

Unlike a lot of other front bumpers, the Trekka winch isn’t hidden behind the face of the HD Series bumper. Nor is it sitting up in front of the radiator either. Rugged Ridge’s designers did a nice job of blending visibility of the rope while nestling the winch down into the body of the bumper. 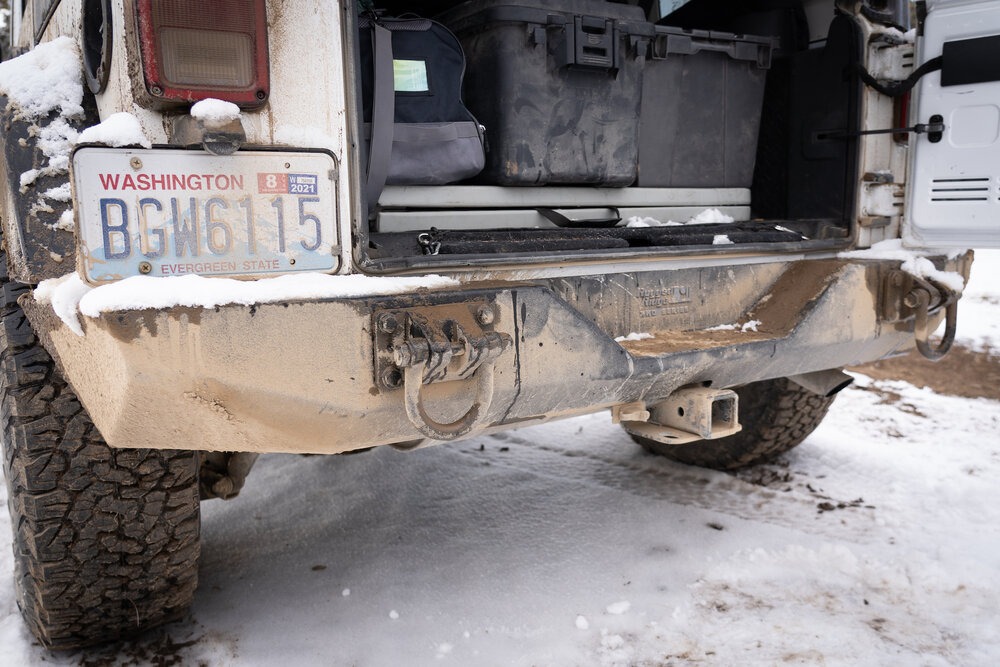 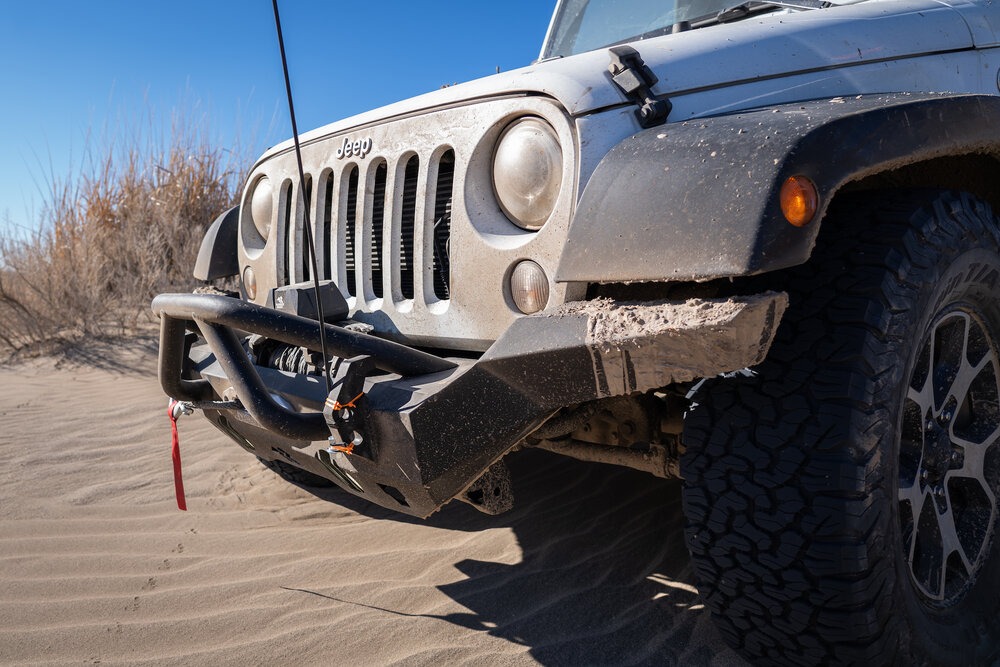 Speaking of the winch, I was impressed with the range of the wireless remote control. Winslow was able to operate the drum with the 85.3-foot rope fully unspooled. I honestly haven’t seen that kind range that strong from a factory wireless remote on a winch from any brand.

Similar to the front, the XHD rear bumper impressed me. It’s tough looking without looking overly aggressive. If you didn’t know it wasn’t factory, you might not notice it — and on a barely modified JKU, I consider that a good thing. What’s more, it held up to all the torture tests were tossed Winslow’s rig into on our trip.

The thing that pleased me most about the Rugged Ridge gear was that they suited my friend and his budget. Winslow and his wife are frugal sticklers. But they’re also outdoorsy adventurers. So, whether they would admit it or not, they needed more than a stock JKU. And I’ve been trying for years now to find armor for them that they could both agree upon and afford. Rugged Ridge finally created armor that fires on all cylinders. For that, I am thankful.