Rooftop Tents: Which Style Is Right For You?

Even though rooftop tents became popular in the U.S. over the past decade, they are not a new phenomenon. In fact, rooftop tents (RTT) have been around since the late 1950s and can be traced back to a single tentmaker, Stefano Stogl, in Milan, Italy. The brand Stogl created is now known as Autohome around the world.

While build styles and materials have changed over the years, RTT remain fairly true to their roots with the two distinct styles: hard-shell and folding fabric models known as soft-shell.

Picking which one — hard- or soft-shell — is right for you requires some weighing of priorities and prices.

The path to ownership of a new RTT is going to set you back some considerable cash. Before you leap in with both feet, consider how often you’ll be using the tent. If you occasionally camp with your family (four to five times per year), you might want to consider an entry-level RTT. Entry level tents will most likely be soft-shell and will range in price from $1,100 to $2,500. If you adventure more often and/or are looking for something sturdier with often higher quality materials, you should consider a hard-shell fiberglass, carbon fiber, or aluminum RTT. Those are going to set you back $3,000 to $4,000.

A new contender is Redtail Overland’s RTC or Rooftop Camper. This 100% hard-sided tent/camper has built-in solar, a diesel heater, interior and exterior lighting, and more. These are more than a RTT and the price reflects that, retailing for more than $20,000.

Whatever RTT you end up choosing, you’ll want to take into account the advantages and disadvantages of each setup. Usually the only way to do that is to try them out yourself in real-world situations. Luckily, you have access to a guy (me) who had both types of tents and can give you an honest assessment. 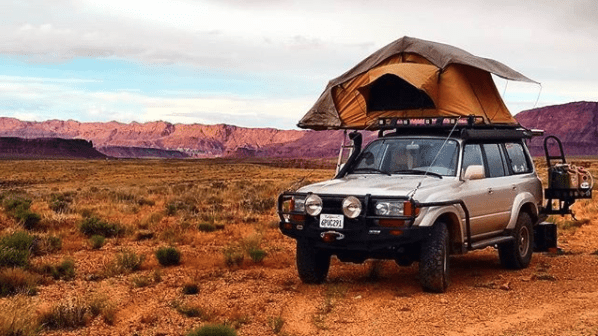 Since folded fabric RTT have a hinged base that cantilevers away from the vehicle, the overall footprint of a tent like this takes up far less room on the roof rack than a hard-sided version. Depending on the total surface area of your roof, that could be a quarter to half of the roof rack that remains open for storage cases, MAXTRAX, or anything else you might want to carry on the roof.

Another advantage is the shade that a cantilevered tent creates over the back or side of your vehicle. If you add an annex room to the underside of the tent, you have a ton of space for storing gear and you have a nice spot to change clothes if needed.

Simply put, folded fabric soft-shell tents aren’t that easy to set up. The tent itself is protected from the elements by a heavy, waterproof cover. To access the tent, one needs to unzip that cover, fold it back and away, open the tent, climb the ladder, tighten the internal frames and insert window fly stays. This requires all sorts of climbing on and around your vehicle.

Most soft-shell RTT can not accommodate your sleeping gear, so that needs to be taken out of your vehicle and set up in the tent. This whole process can take 15-20 minutes. Putting it away is far worse. Like trying to insert a square peg in a round hole, getting the extra fabric folded up neatly so you can get the cover back on is a chore in itself. Never mind if it is raining or extremely hot while you’re trying to break camp.

If you’ve ever been in a soft-shell RTT in a wind storm, you’ll know that peace and quiet is lacking. The soft window flies flap around and the tent sides often slap against the internal tent frame creating what can only be termed “a ruckus.” I’ve had many a sleepless night in the desert Southwest as the temperatures cool down at night causing thermals. One thing I never left home without when I had a soft-shell RTT were a pair of earplugs.

A hard-shell RTT is usually tapered from front to back and even though some models are quite heavy, that tapering allows for wind to rush around it instead of slamming into the brick wall of a soft-shell tent sitting atop your roof. If you drive an old Land Cruiser like I do, you’ll appreciate the extra gas mileage.

Setup is infinitely easier than using a soft-shell RTT. I can literally flip two buckles on my Alu-Cab Expedition III and the gas struts will open my tent for me. I just grab the ladder, set it up, and close the windows. The entire process takes four minutes — that’s all. I’ve timed it. I can have my tent fully set up and my awning fully deployed enjoying a post-drive beer in less time than it took me to set up my old soft-shell RTT. Breakdown takes a tad bit more time, but we can be packed up and on our way in about five minutes.

Weight is the one factor that could turn people off from a hard-shell RTT. We can jump into a whole debate on gross vehicle weight ratings and how most overlanders have zero regard for it, but suffice to say a 150- to 180-pound hard-shell tent is most likely well above what your gutters are designed to hold.

Another disadvantage is that a hard-shell RTT takes up your entire roof. That makes it difficult to carry anything else on your roof. Some of the aluminum hard-sided models have load bars on top of the tent for just such an issue, but I really don’t recommend loading anything more than a set of MAXTRAX up there, as it is difficult to access.

So Which Do I Choose, Hard- or Soft-Shell?

Ultimately, that decision lies in your hands. You know best how you’ll use your tent. If I had to choose, I would 100% go with the ease and convenience of a hard-shell, even if that means giving up roof rack storage. If you can afford the initial investment, you’ll be much happier in the long term.