Front and rear locked Dana axles, factory 35-inch tires, and a turbocharged V6 — these are just a few of the available features of the all-new Ford Bronco. They’re impressive, sure. But will they make for a keen overland rig?

Spoiler alert: I’ll go ahead and give a definitive “yes.” In fact, it may change the overlanding segment forever. But I’ll get to that later.

Obviously, Ford had its sights set on the Wrangler. If, like me, you’re worried Ford would simply copy the Wrangler and put a retro nose on the thing, you can rest easy. Although it has definite Jeep undertones, the Bronco is definitively its own beast.

Like a Wrangler, the Bronco is designed to be modular. For example, like the Wrangler JL, the Bronco’s optional steel bumper can fit a winch. Its outer wings can unbolt, too, for greater clearance. And the grille, as you can see, reads Bronco in oversize script.

The front fenders are peaked, both in an homage to the original Bronco but also to provide a quick visual reference of the corners of the vehicle. 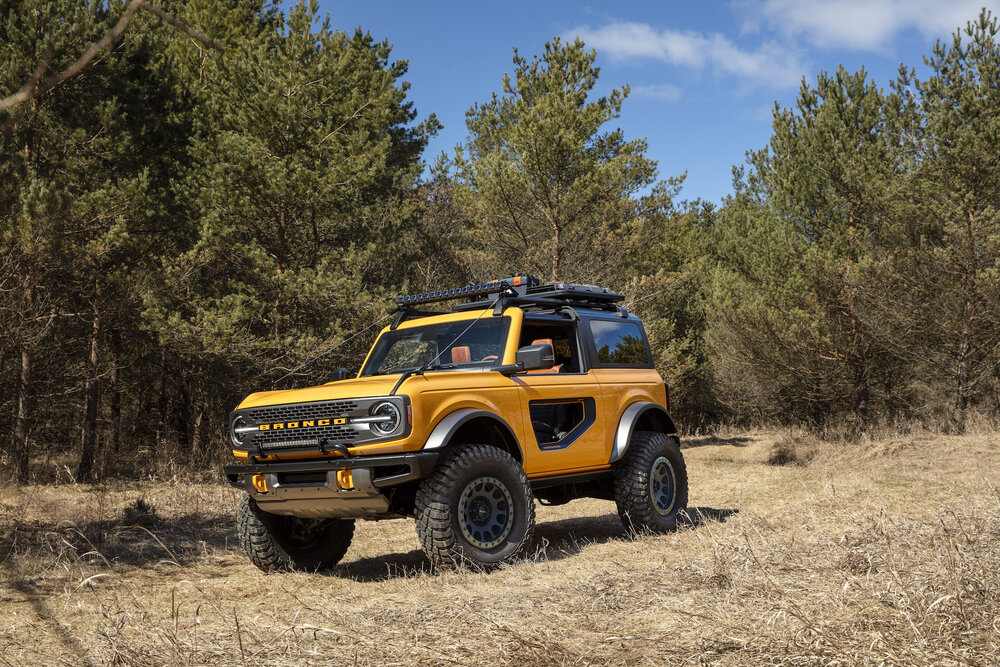 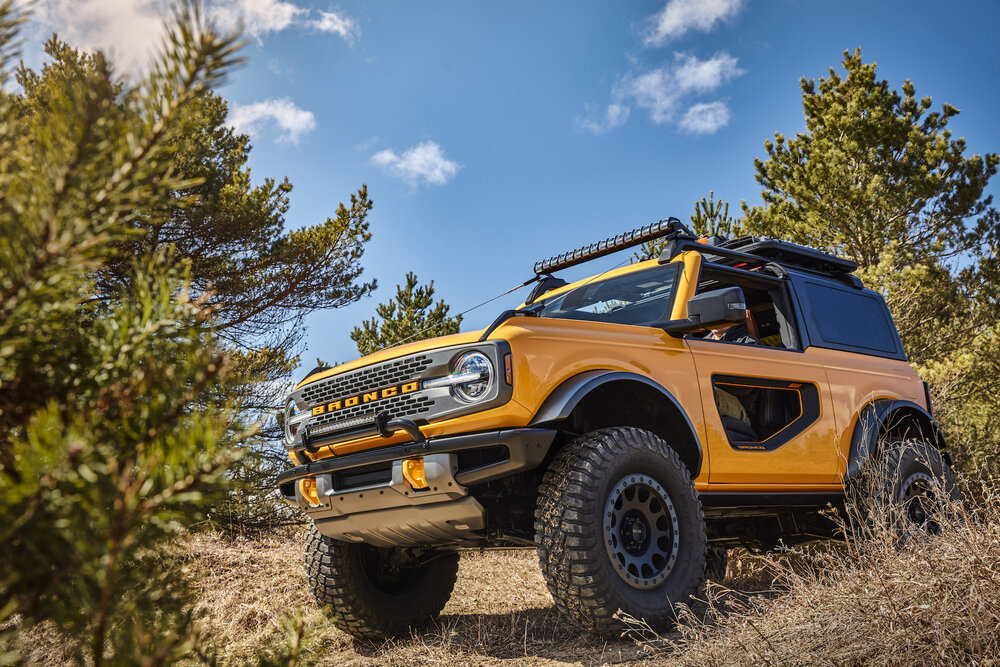 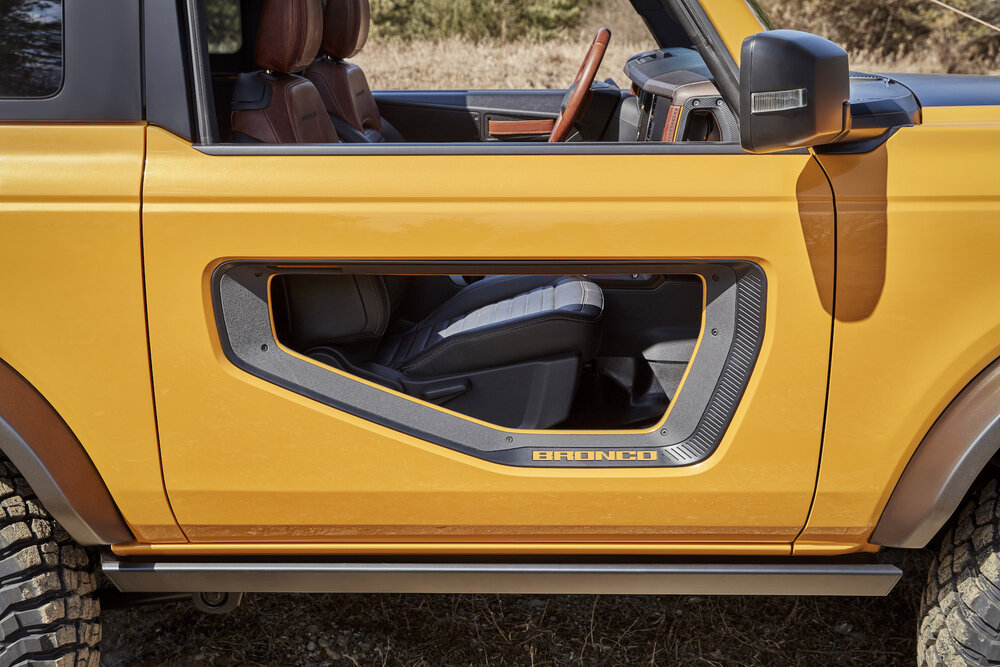 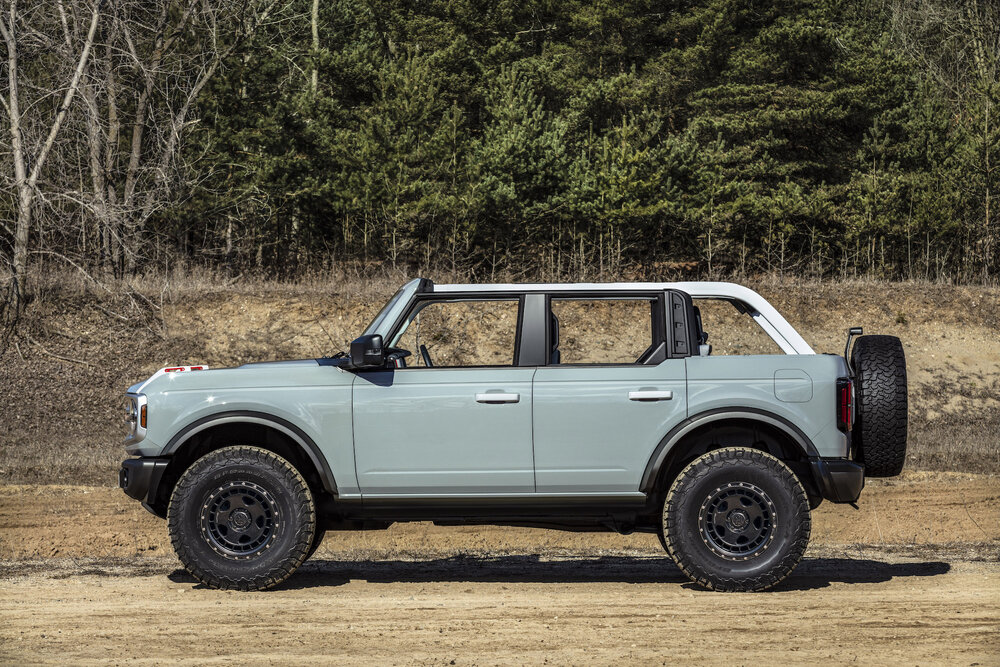 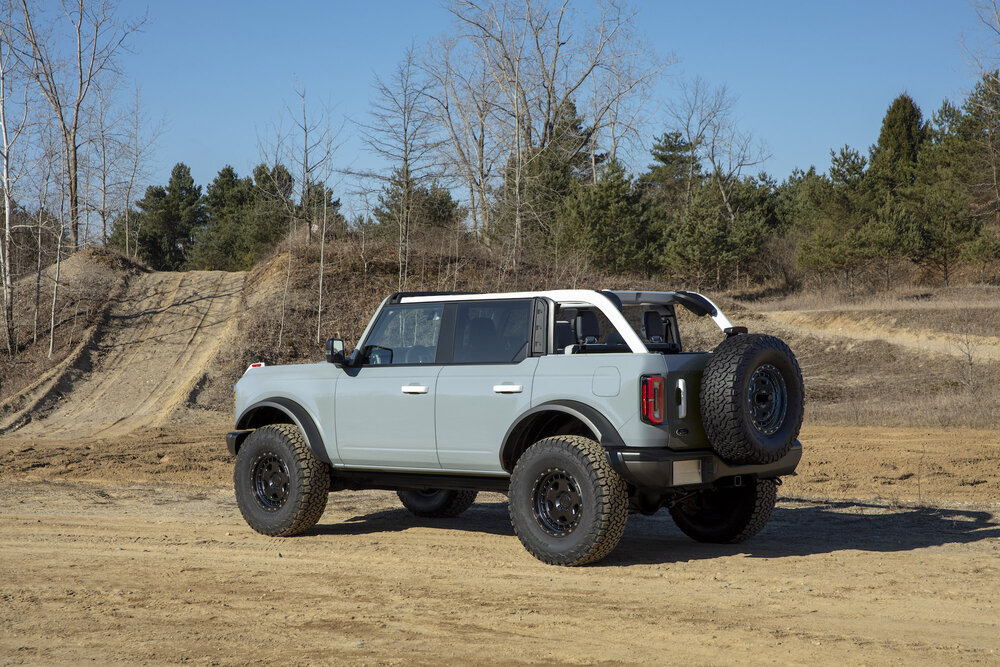 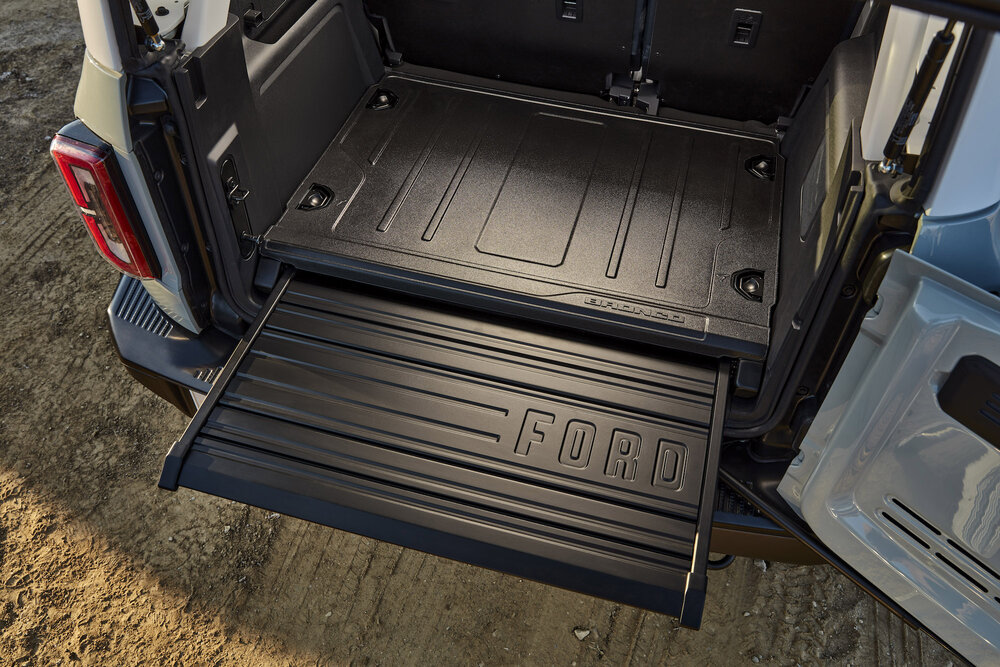 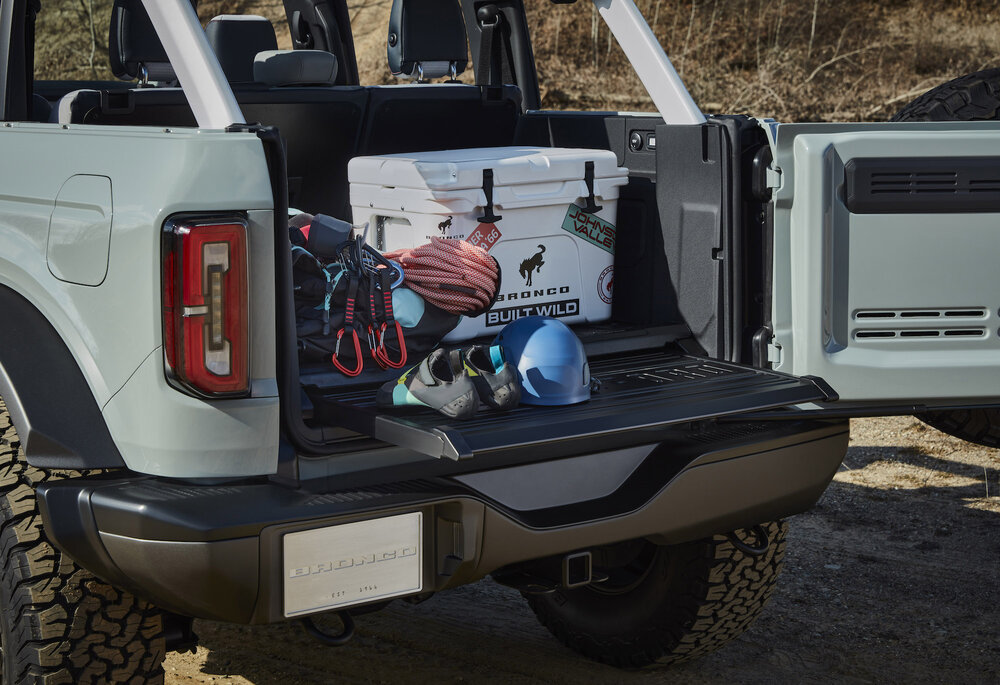 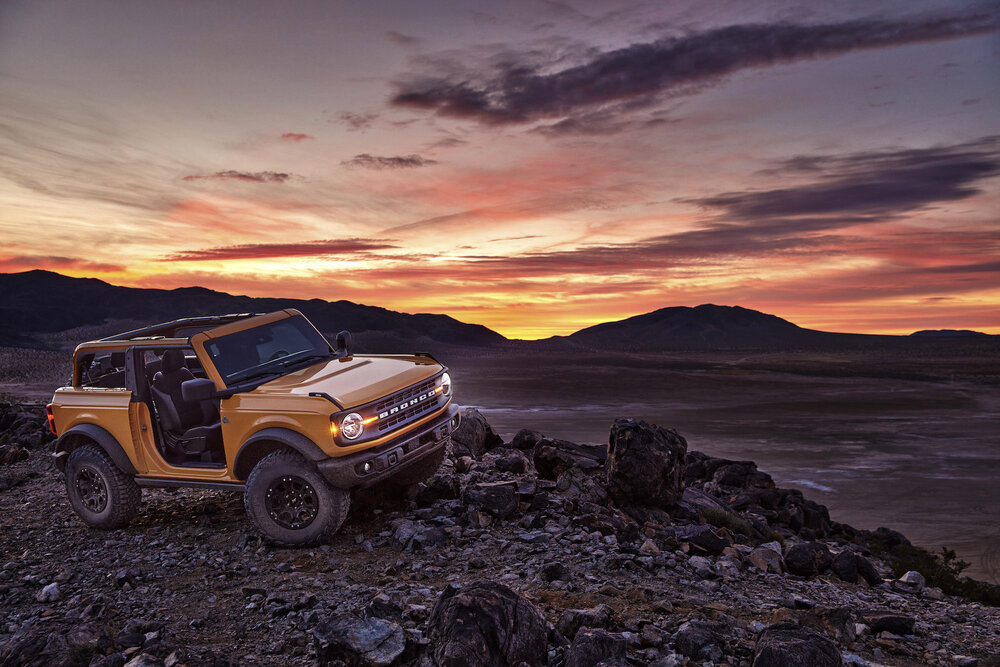 The chief designer of the Bronco said that with a wrench and an hour, owners can pull apart great portions of the vehicle. Each bolt that fastens a modular part of the Bronco — from doors to fenders to bumpers to sill-protecting rock sliders — is stamped with the new bucking Bronco logo. That way, customers know which bolts to remove to begin customizing their rig.

For example, like a Wrangler, the doors come off. Unlike a Wrangler, though, the side-view mirrors don’t come with them. The side mirrors are integrated into the cowl. The doors themselves are made from lightweight alloy, allowing even the smallest Bronco driver to be able to remove their doors.

Further differentiating itself from the Wrangler, the doors have been designed to fit in the rear of the rig. That means you don’t have to leave them in your garage or, heaven forbid, chain them to a tree on the trail. And, should inclement weather hit, they’re with you for a quick reinstall.

Around the back, the side-hinged rear door swings wide enabling easy access to your gear. Designers added a pullout tailgate, so you can still sit at the back without unloading your gear.

Behind the large Bronco moniker lies one of two engines: a standard 2.3-liter EcoBoost inline four-cylinder engine that produces 270 horsepower and 310 pound-feet of torque or the optional 2.7-liter EcoBoost V6 engine that churns out 310 hp and 400 ft-lbs. Both engines are turbocharged, as indicated by their EcoBoost moniker.

No matter which engine you pick, its power is routed to all four wheels through either a 10-speed automatic or an optional seven-speed manual gearbox, which Ford says is essentially a 6-speed with a crawling gear. If you opt for the manual, it’ll boast a class-leading crawler-gear ratio of 94.75:1. The auto has a 67.8:1 crawl ratio.

Does this mean that the Bronco can boast the compliant on-road manners of IFS and the toughness and articulation of a solid front? Ford seems to believe so. That articulation is thanks in large part to the hydraulically disconnectable front and rear sway-bar links. They can be disconnected even on an angle. And they automatically reconnect. I haven’t dug through the technical briefs on the Ford system yet. But I assume this is akin to the Toyota Kinematic Dynamic Suspension System (KDSS) system.

The Bronco’s 4×4 system is more complicated than you might expect. At first blush, it seems similar to Land Rover’s system with selectable modes. Ford calls its 4×4 system G.O.A.T., which stands for ‘Go Over Any Terrain.’ Though, I am sure if you mistook that for ‘Greatest of All Time,’ Ford wouldn’t be mad.

Depending on the trim level, of which there are six, the Bronco is fitted with a wide range of tire sizes starting at 30 inches and ranging up to 35. No matter the trim, however, customers can specify the special Sasquatch package (no, really). Sasquatch adds lockers to both front and rear differentials as well as 35-inch tires at all four corners wrapped around bead-lock capable 17-inch wheels. Even if you order the Base trim, you can still have a capable off-road rig.

Stepping inside, Ford designers were keen to integrate as much of the original design while marrying it with the 21st century, all without adding unnecessary elements. It’s everything you need, nothing you don’t. The standard center infotainment screen is 8.0 inches but you can upgrade to the 12-inch. Both systems run the new Ford SYNC 4, just like the new F-150. 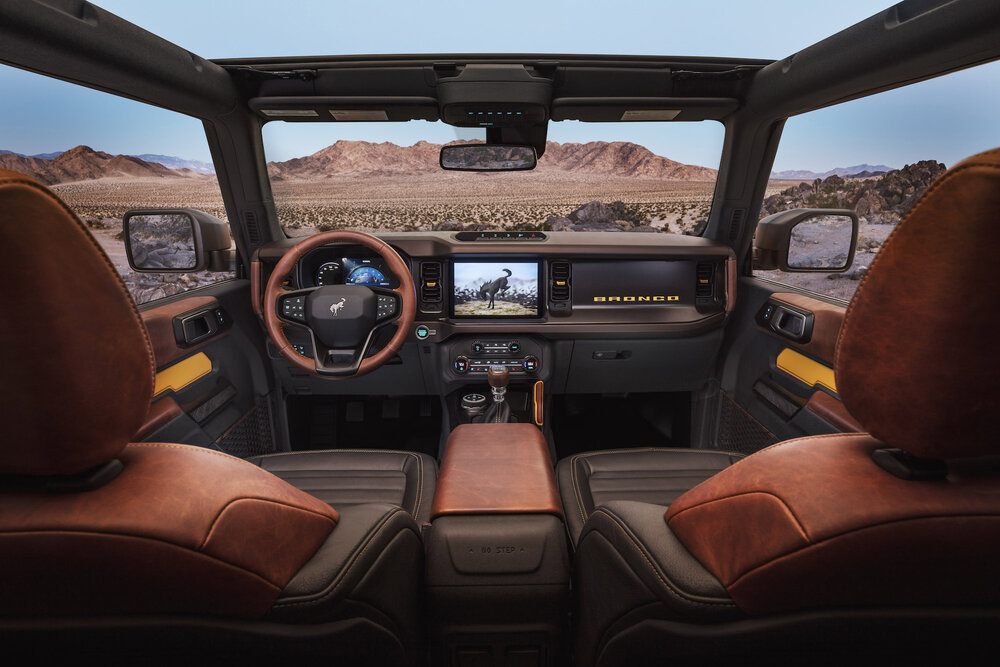 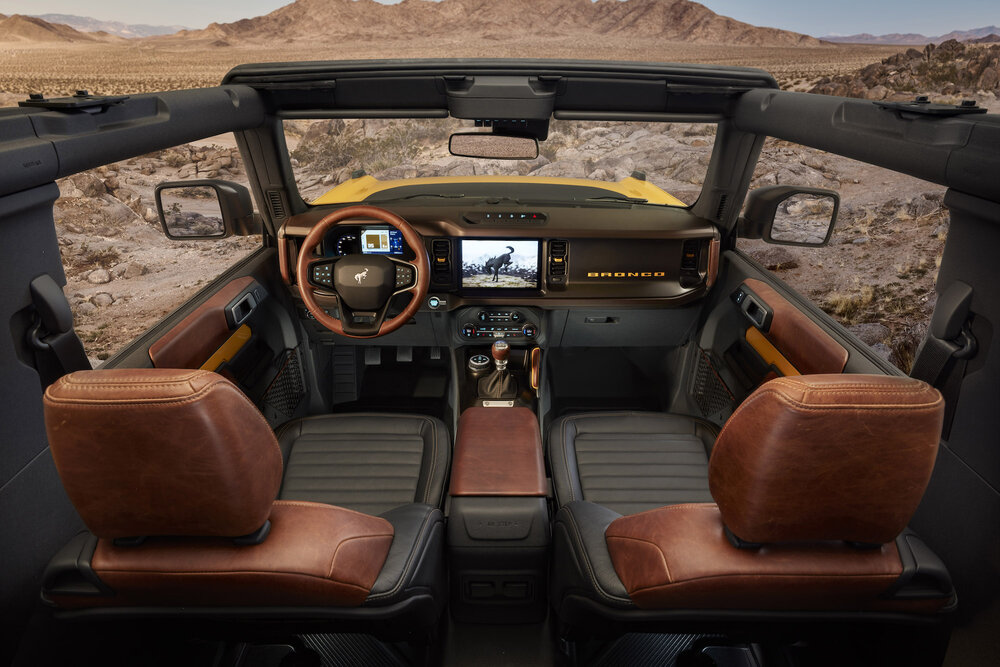 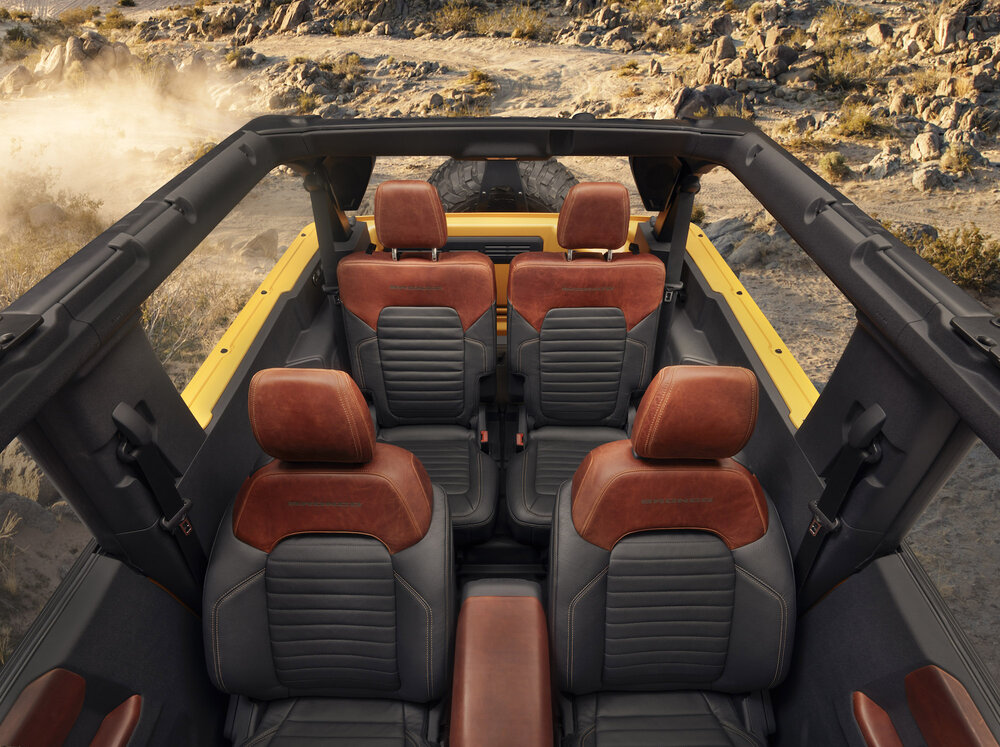 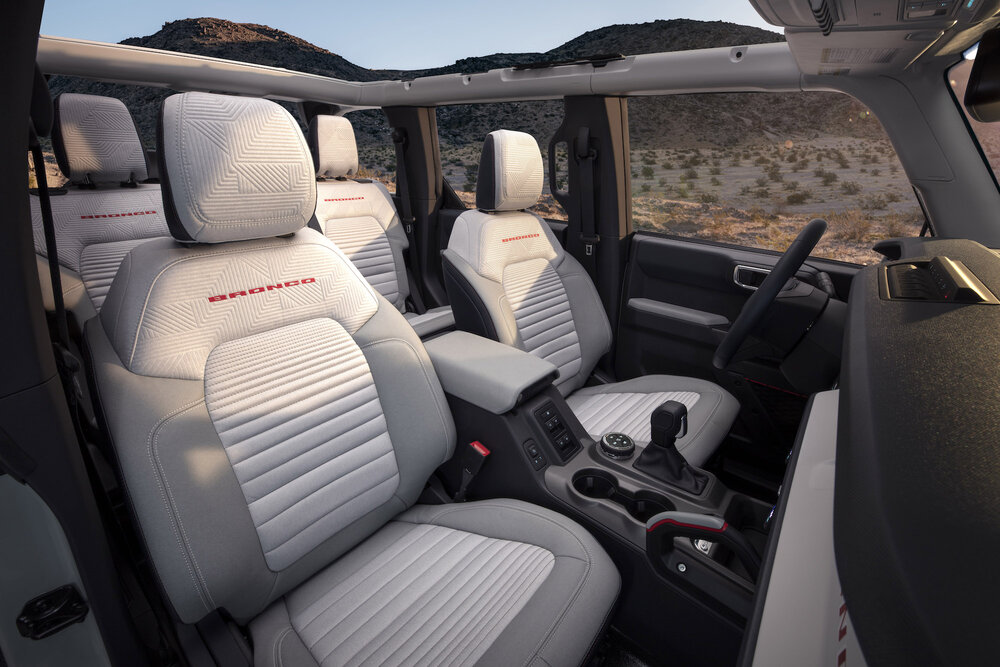 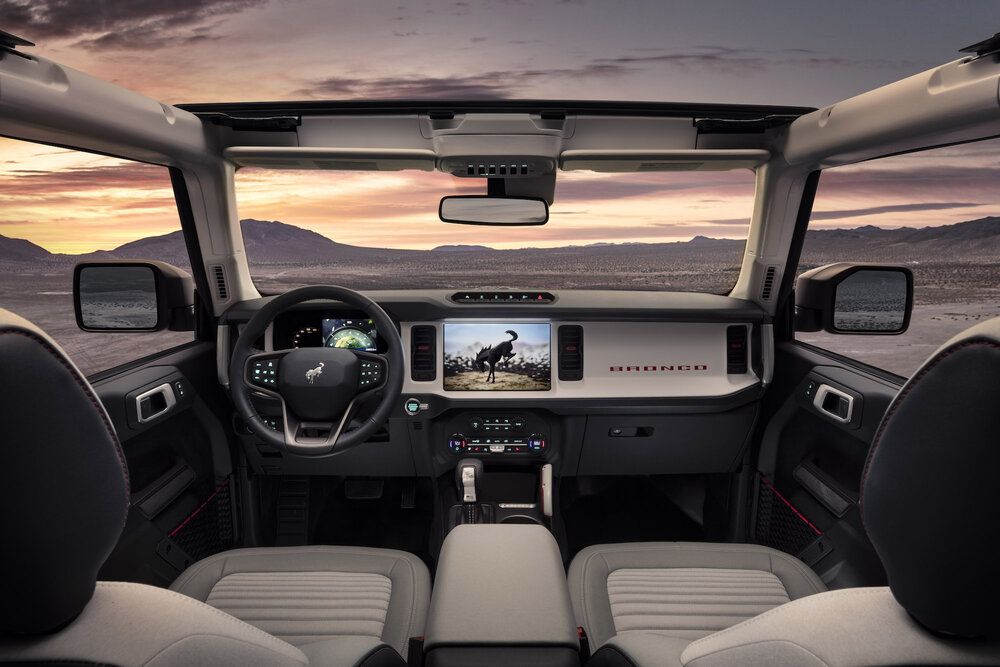 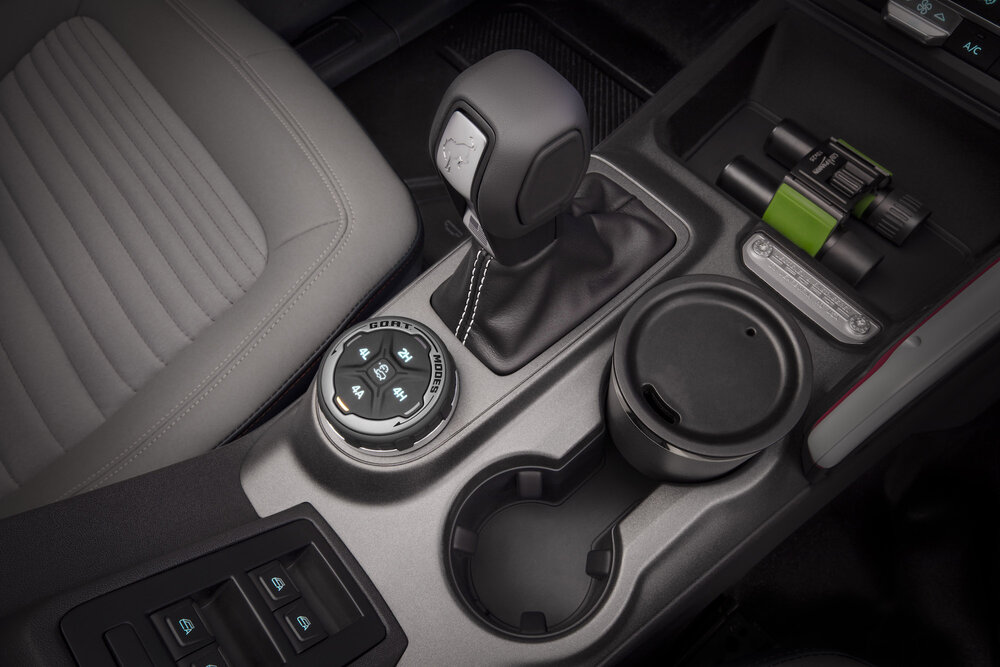 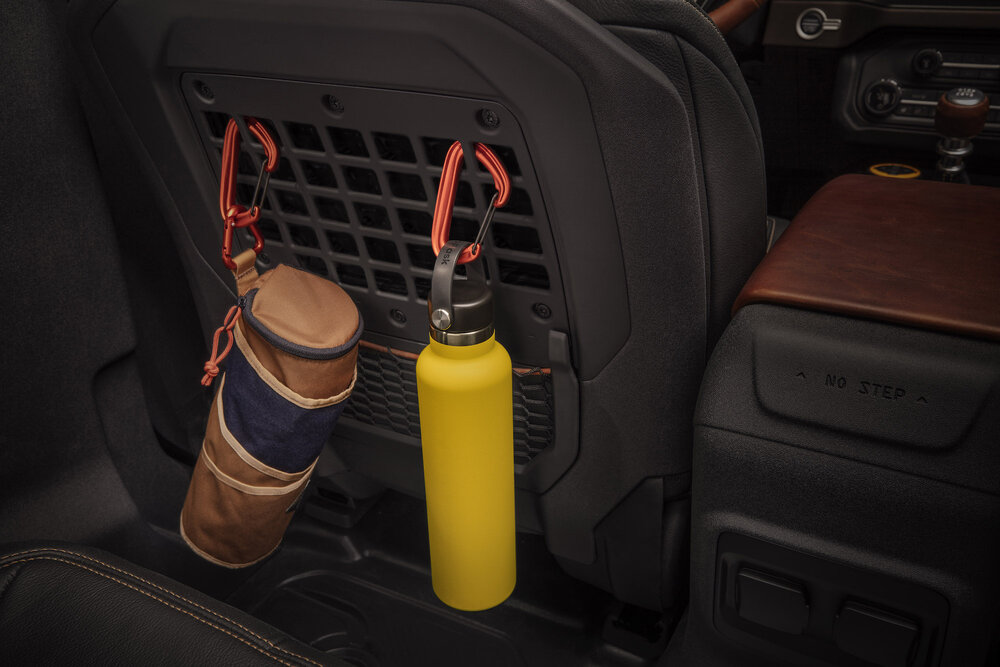 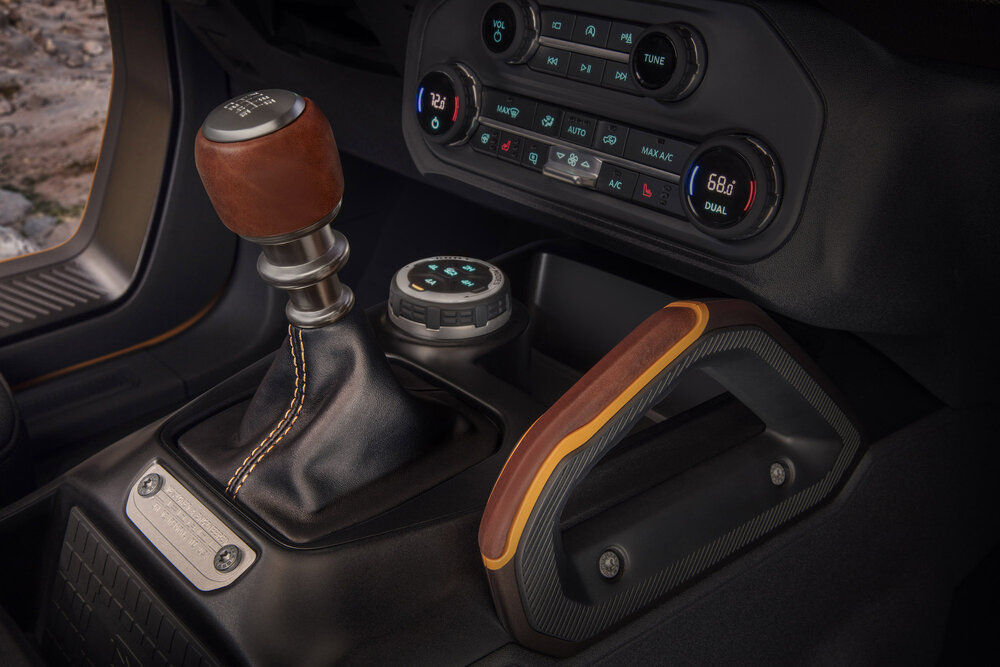 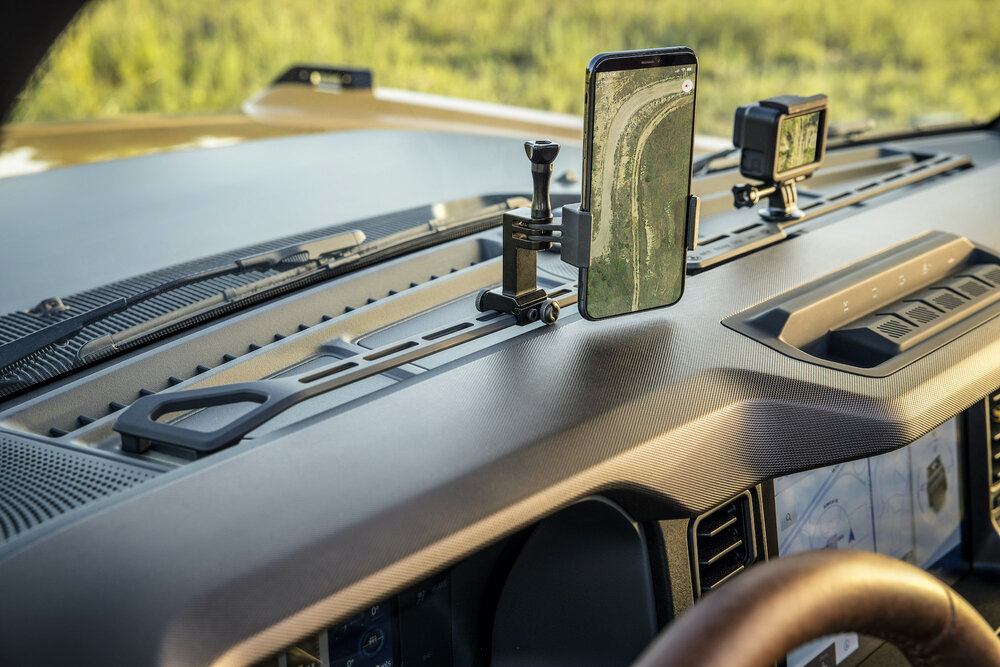 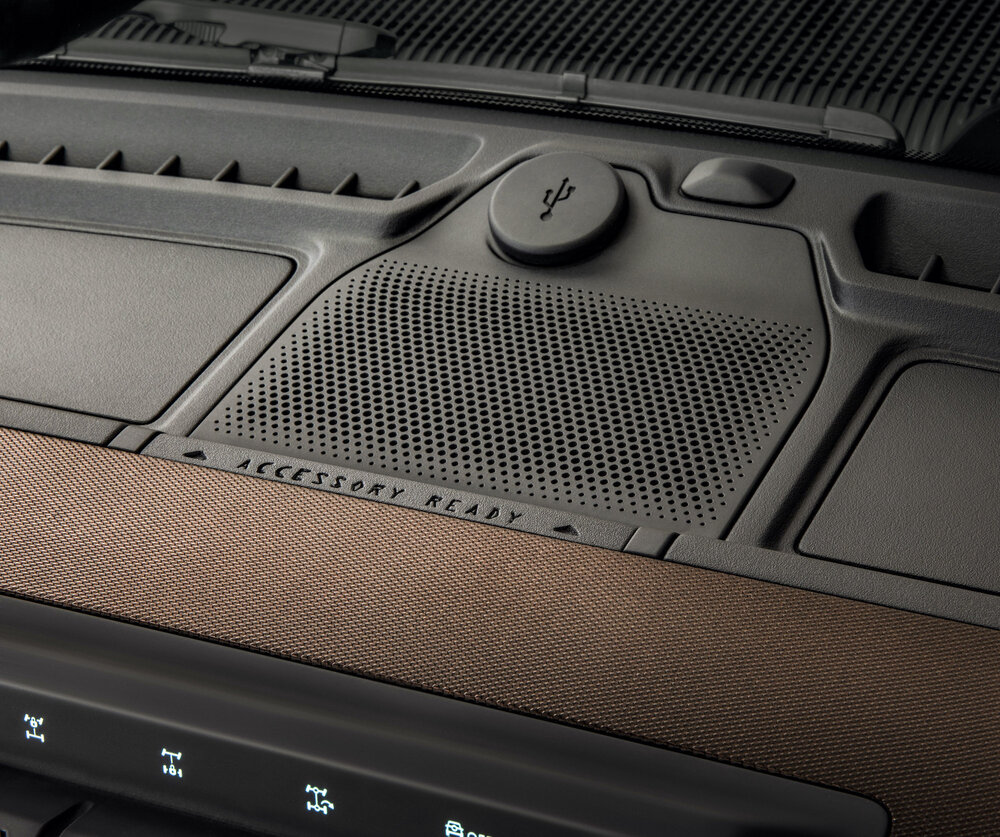 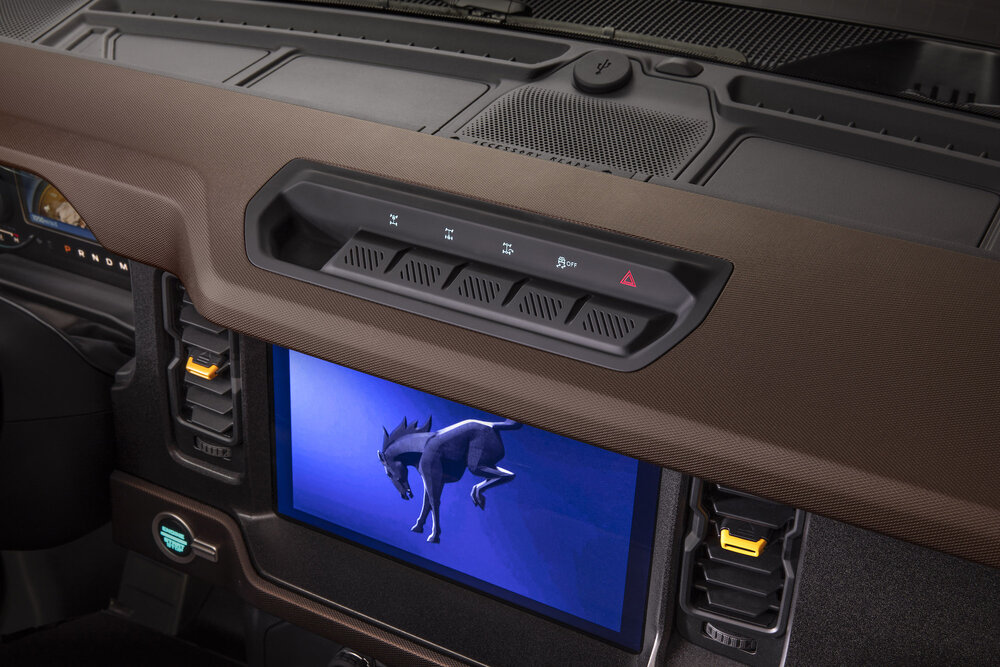 SYNC 4 has been specialized for Bronco, too. It has a special off-road navigation app — loaded with more than 1,000 curated trail maps — with advanced topographic maps from NeoTreks’ AccuTerra Maps, Trails Offroad trail guides, and FunTreks trail guides. With this Bronco-exclusive app, you’ll be able to plan (and share) turn-by-turn off-road adventures from the dash of your Bronco.

There are a bevy of seating trims, too, including the obligatory leather as well as a marine-grade vinyl that pairs nicely with the hoseable rubber flooring. After flinging mud into the interior, thanks to removable doors, customers will be able to hose out their interior with ease. That is, if they cover up their SYNC 4 screen.

In torture testing the Bronco, Ford engineers devised a new testing regimen went beyond that other Blue Oval vehicle programs had ever attempted. Ford calls it “Build Wild Extreme Durability Testing.” For example, the team benchmarked not just the Wrangler but also vehicles like a Polaris Ranger side-by-side.

This elaborate testing not only affected the robustness of the Bronco’s mechanical components, it altered design, too. After thousands of hours off road, including the trails that compose King of the Hammers, designers reimagined where the off-road grab handles should go, for example.

Above occupants’ heads are removable roof panels. Unlike the Wrangler, there is no overhead beam at the B-pillar, so the view of the sky from inside is completely unobstructed. Like the featherweight doors, these panels were designed for lightness and ease of removal.

Now that we have a lot of the basics out of the way, let’s turn to the six Bronco packages. They are: Base, Big Bend, Black Diamond, Outer Banks, Badlands. and Wildtrak.

Base is, well, base. This, Ford imagines, is for those entry-level buyers as well as those who want a bargain-basement blank slate off which build their dream rig. Remember, you can add Sasquatch even to the Base. Yes, you can get a triple-locked Base trim Bronco with 35s.

Big Bend, named for the park in Texas, steps up the rig’s off-road bona fides a bit with 32-inch tires.

Outer Banks is the style- and tech-focused trim level. Imagine it as equivalent to the Wrangler Sahara. So, we’ll skip over that one.

Wildtrak is at the top. It’s the one in line with Jeep’s Mojave. It’s built for high-speed desert running. Wildtrak is 1.4 inches wider than the other trims. 35-inch tires are standard. It also has Bilstein position-sensitive monotube shocks, stabilizer disconnect, and front and rear locking differentials. It was developed in Johnson Valley, California.

These are just the wheel and tire changes from trim to trim. Certainly, trims affect more than those features.

Since we’re thinking primarily about overlanding, let’s touch on a few specs that will affect overlanders specifically. Approach, departure, and breakover angles remain the same across the trim range. However, other specs vary depending on the trim. So, let’s look at those.

Base boasts 8.4 inches of ground clearance and 7.8 inches of front suspension travel and 8.4 inches in the rear. Only the 35-inch tires of the Sasquatch package kick ground clearance up to the enviable 11.6 inches. Of course, water fording goes down without the 35s as well, but Ford isn’t giving those figures yet. Assume it drops as quickly as ground clearance, though.

Like I said in the intro, I believe the Bronco will be incredibly compelling for a lot of overlanders. I can envision a future in which plenty of overlanders will migrate from their aging FJ Cruisers and JK Wranglers into Broncos. I won’t be surprised to see Broncos begin to dominate Overland Expo events in 2021 and beyond.

That said, overlanders will be initially stuck (so to speak) with just the Ford-designed accessories while the aftermarket tools up for the Bronco. Based upon how long it’s taken for Gladiator support to get rolling, it might be a while. So, good on Ford for creating 200 factory add-ons for customers to select from at launch.

Once the aftermarket spools up, it will be game on for the Bronco owners. And Bronco may well become one of — if not the — most popular overlanding rig.

Pricing starts at $29,995 for the Bronco. Though, like the Wrangler, the one you’ll really want to live with and in for years to come, will probably be lapping at the shores of $50,000.

That is, unless you’re one of the folks who will slap Sasquatch on a Base model and call it good. If you do that, let’s talk. I’d love to follow your build and subsequent adventures on a naked Bronco with 35s and lockers.

As much as I admire the all-new Bronco, and I really do, I can’t help but start thinking about the next-gen Ranger. The Bronco debuts Ford’s next-gen global mid-size ladder-frame chassis platform on which the next Ranger will ride.

That means that the new Ranger will get a EcoBoost V6 and maybe (fingers crossed) factory 35s, front and rear lockers, and 10 inches of front suspension travel.

I point this out because, after having overlanded with SUVs for a decade, I recently switched to a Gladiator. I have become smitten with having a truck bed. So, for me, Bronco is out of the running. However, an equally capable Ranger could be quite compelling indeed.