Part 1: First You Buy a Land Cruiser, Then You Saw Off the Roof

What is the ultimate expedition vehicle? Of course, there really is no such thing. Nominating just one would be as difficult as defining the word “expedition,” which I’ve heard used to describe everything from the Apollo 11 mission to a niece’s trip to a local mall.

But if we agree that an expedition involves something beyond binge shopping, we can also agree that an expedition vehicle must be suitable for something beyond, say, weekend camping trips to the local national forest — not that it can’t be used for such. Broadly, we’re referring to a vehicle designed by the manufacturer for extended journeying in harsh country, where outside mechanical help might be tens or even hundreds of miles away, and where a breakdown that cannot be fixed on site could result in a survival situation if traveling solo.

Thus, reliability is absolutely paramount, followed by its close relative, durability — mechanical and structural integrity sufficient to withstand prolonged use in countries where paved roads are the exception rather than the rule. Add in the parameters of off-road ability, fuel capacity (and economy) for long no-resupply routes, cargo capacity (and a GVWR to handle it), third-world parts availability, and at least a modicum of comfort, and it is clear no single vehicle on earth could top every category.

Several come close in my experience, for differing reasons: The Land Rover Defender 110, the mighty (and mightily expensive) Mercedes G-Wagen Professional, the Jeep Wrangler Unlimited fitted with the world-market turbodiesel. However, given that ultimate priority of reliability and durability, one perhaps comes even closer: Toyota’s 70 Series Land Cruiser Troop Carrier, or ‘Troopy’ as it is known familiarly to legions of professional hunters, guides, scientists, NGO procurement officers, and various insurgent groups.

Combining oversize running gear on a fully boxed chassis, a six-cylinder diesel engine so bombproof it has remained in production for 25 years, a cargo area large enough to return echoes, and other expedition-ready features such as dual fuel tanks totaling 180 liters (47 gallons), and factory optional differential locks, it’s no wonder the Troopy has come to dominate its niche while former fierce competitors such as the Defender have faded away.

Roseann and I have been lucky enough to put thousands of miles on numerous Troopies in North and East Africa doing conservation and guiding work, with stellar service. One egregiously abused example furnished by a crooked fixer in Tanzania had no body seals left, and constantly sucked dust into the cockpit in choking density sufficient to obscure the driver’s vision. We hated that thing by the end of the trip — but it ran flawlessly. 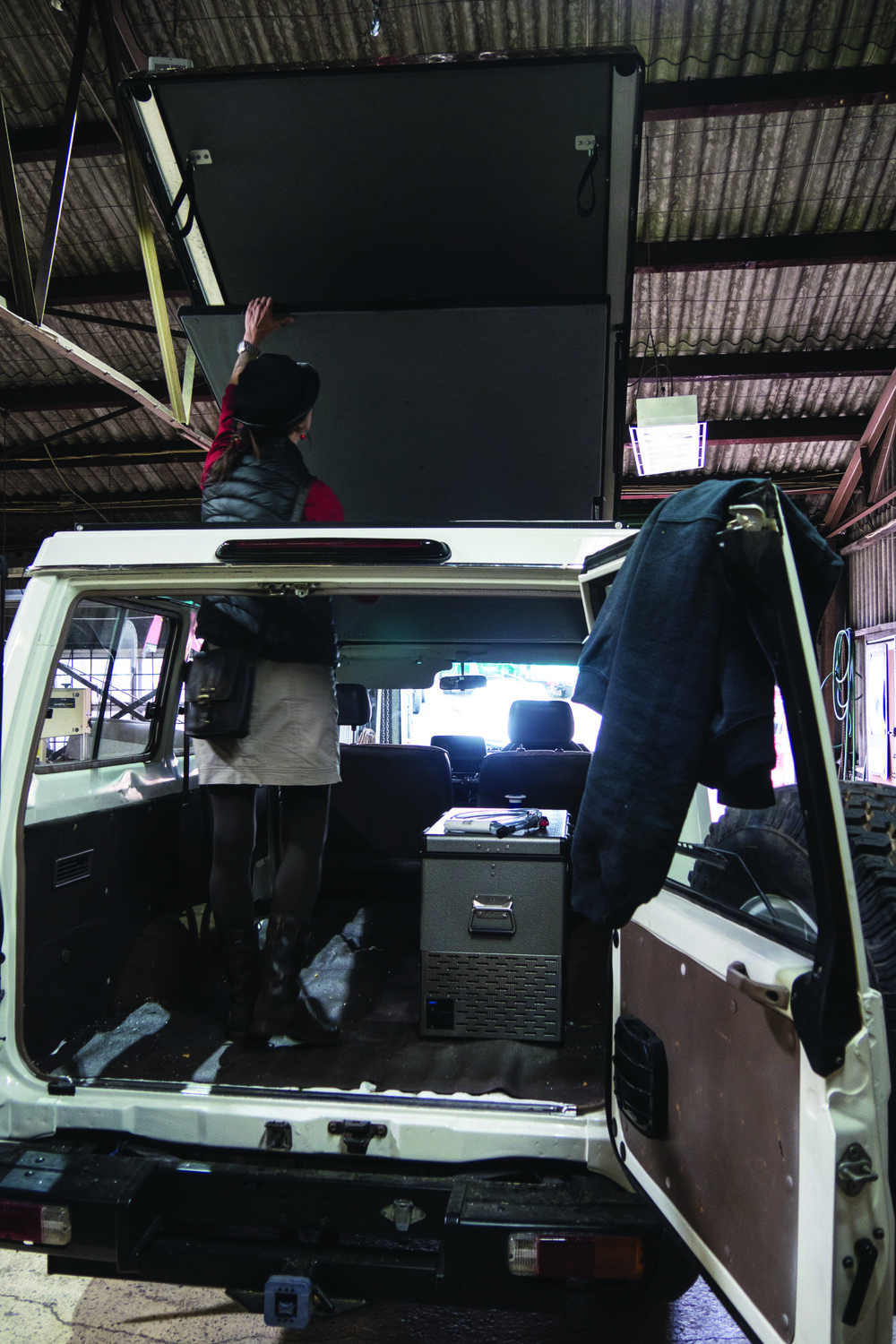 Roseann inspecting the pop-top before the canopy is attached. | Jonathan Hanson 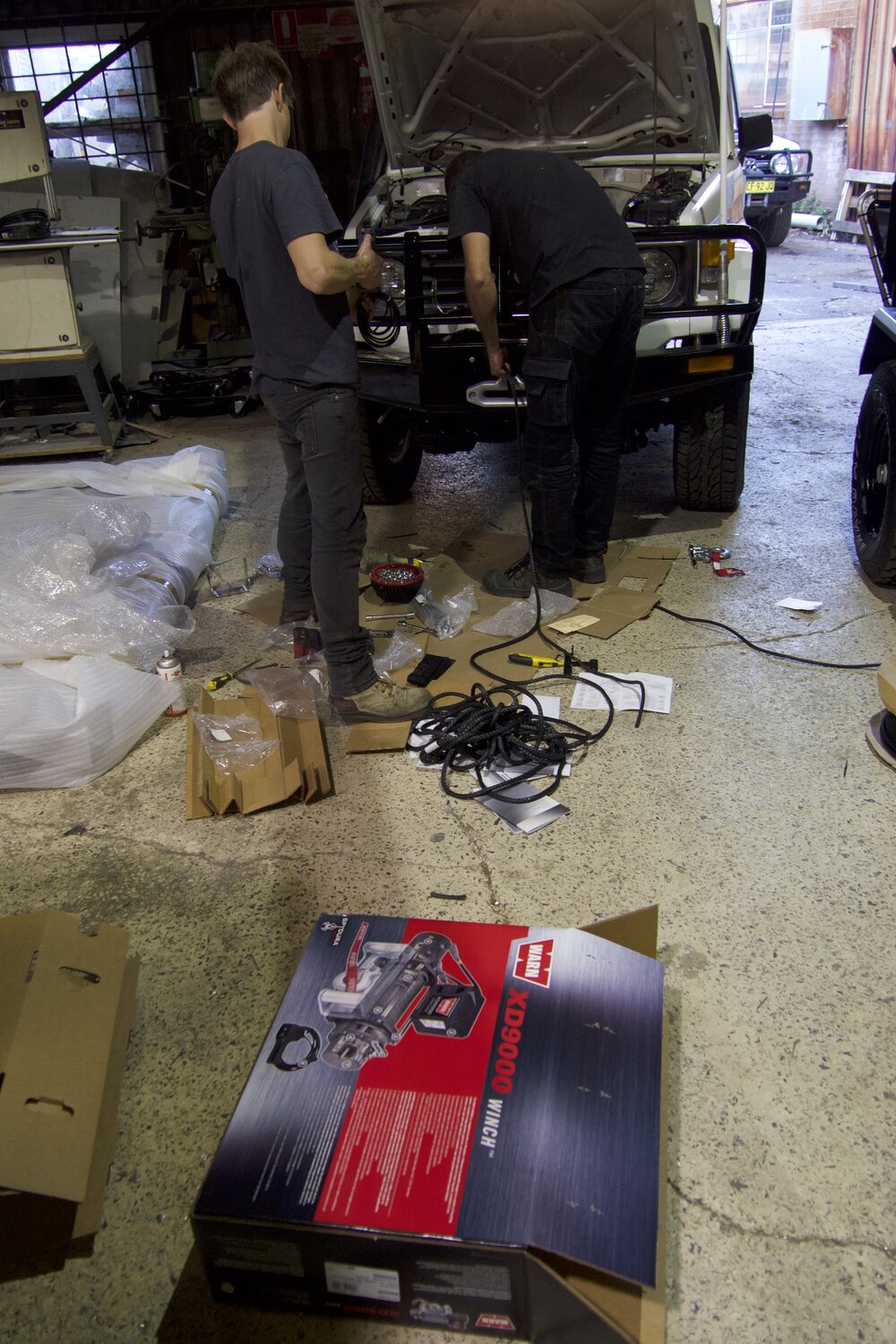 We’ve long speculated on just how cool it would be to own a Troopy, perhaps even import it to the United States, where they were never officially sold. For once, we found time to be on our side. The U.S. allows virtually any vehicle over 25 years old to be imported without the need to conform to current standards. That means the first years of Troopies powered by that superb 1HZ engine — introduced in 1990 — are now eligible (earlier years made do with the equally reliable, but anemic, 2H diesel). In 2016, after purchasing airline tickets for a planned trip to Australia, we found that rental companies refused to let us take their Hilux pickups on our planned route across the Simpson Desert via the remote Madigan Line. It was but a small leap to conclude, “Hey, why don’t we just …”

The good news is, Troopies are as ubiquitous in Oz as F-150s are in the U.S. Online searching via the websites gumtree.com.au and AUStoUSA.com uncovered lots of candidates. The not-so-good news is that, like most 4×4 vehicles of the era, Troopies are susceptible to rust in damp environments. And despite the fact that 70 percent of Australia is desert, 90% of the population lives within a few miles of the coast — and Australians love to drive on the beach and fish.

I found Troopies of “legal age” starting at less than $6,000 U.S., but we decided that if we were going to import our dream vehicle, we should get the best one possible. I finally tagged a low-mileage, rust-free (according to the dealer), extremely clean example in Darwin, on the north coast, for $16,000 U.S. It was a 1993, meaning we’d be able to import it in 2018. We debated, stared at the photos for hours, then held our breath and initiated the wire transfer.

Done? Barely started. Since making the commitment to buy, we’d been brainstorming regarding the way we wanted to outfit it, based on our experiences with personal vehicles ranging from a 1973 FJ40 to a 2012 Tacoma, overlanding setups ranging from backpacking tents to roof tents to Four Wheel Campers, plus a raft of rental and review vehicles with widely different setups. Given the cavernous cargo bay of the Troopy, we wanted to see if it would accommodate a built-up interior that would facilitate extended, self-supported backcountry travel — the very definition of overlanding. Items on the list included adequate storage, seating for two, a stove and sink, a minimum 15-gallon water tank and pump-fed faucet, a 12-volt fridge, and sleeping arrangements. Standing headroom? That would be nice for inclement weather when we needed to hole up, but we didn’t want to permanently alter the profile of the vehicle — no bulbous grafted-on camper units that could both compromise its structural integrity and alter the height, width, and departure angle. 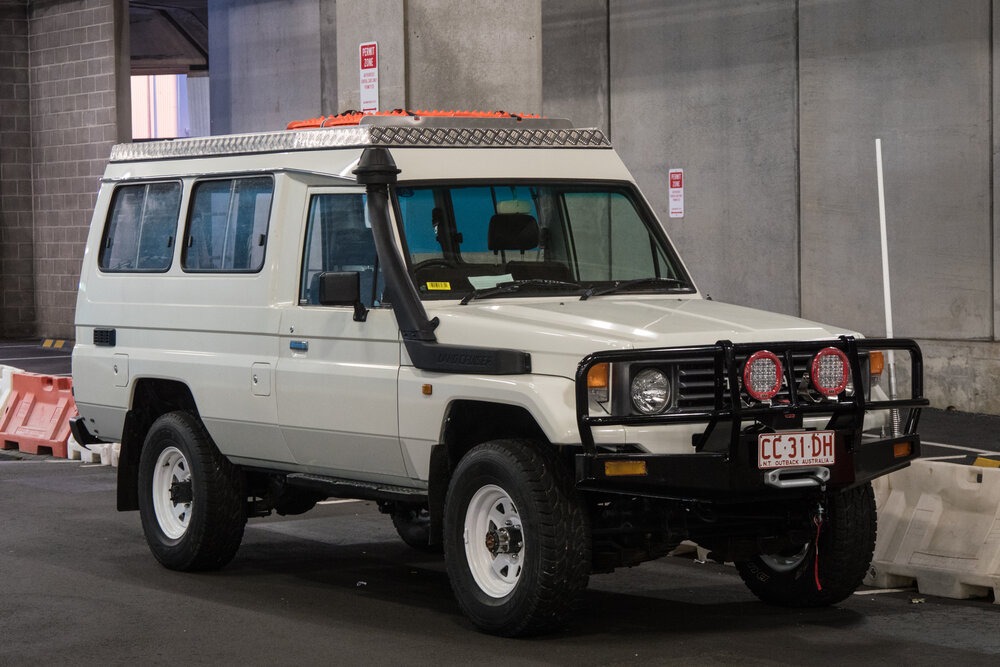 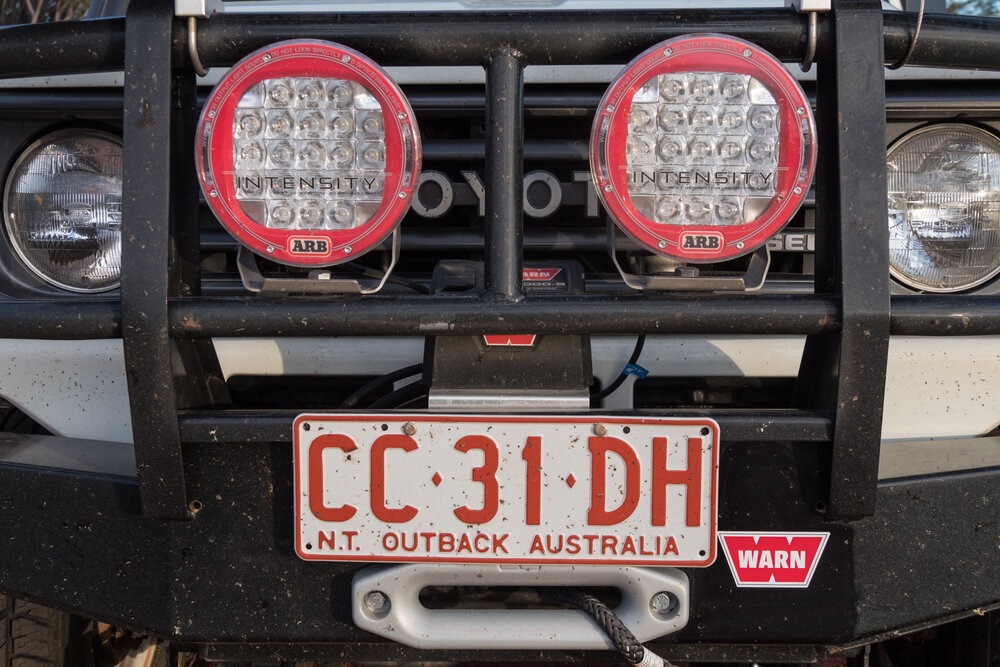 The superb ARB Intensity 21 driving lamps—our most important safety feature, given kangaroos on the roads at night (and despite not wanting to do so, we always ended up driving at least a few times in the dark). | Jonathan Hanson 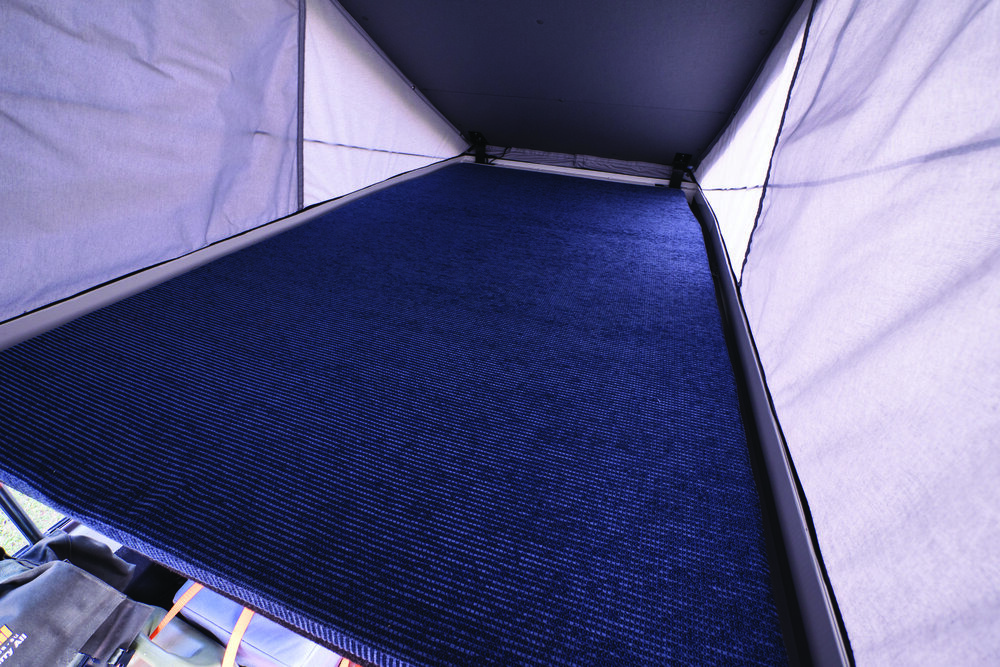 The comfortable drop-down bed of the pop-top. | Jonathan Hanson

However, our flights for that Simpson Desert trip were now just a few weeks away. What could we possibly have done in that time?

Another online search led us to the Expedition Centre in Sydney. Daniel Fluckiger, the Swiss/Australian owner, specializes in exactly the sort of of vehicle preparation we had in mind, and manufactures an aluminum pop-top conversion for the Troopy (and the Defender 110) that provides standing headroom in the back of the vehicle when raised, and includes a drop-down double bed with mattress, yet when closed raises the height of the vehicle only 30mm — barely an inch. He immediately responded to our emails, and to our surprise said he thought he could have the pop-top installed by our arrival.

Therefore, shortly after buying a Land Cruiser sight unseen, it was on a train to Sydney to have its roof sawed off.

We arrived in Australia with our friends Graham and Connie (who had bought their own Troopy) in time to watch Daniel button up the pop-top. He had also hard-mounted a 125-Watt photovoltaic panel on the rear of the aluminum roof, and brackets to secure a pair of MaxTrax recovery mats—the best of their kind in my experience—to the front. The pop-top proved to be just what we had hoped for—extremely rigid yet easy to raise on gas struts, well-ventilated, with a comfortable bed that lifted out of the way on its own struts.

With only a few days before we left for the bush, we now concentrated on functional accessories. Daniel installed a Warn XD9000 winch in the existing ARB bumper, spooled with 100 feet of 3/8-inch Dyneema line. The debate — if there ever really was one — between steel and synthetic winch line ended for me a long time ago: The massive safety advantage and handling ease of synthetic is unequivocal, added to which is the ease of splicing an unlikely break to regain virtually full strength. 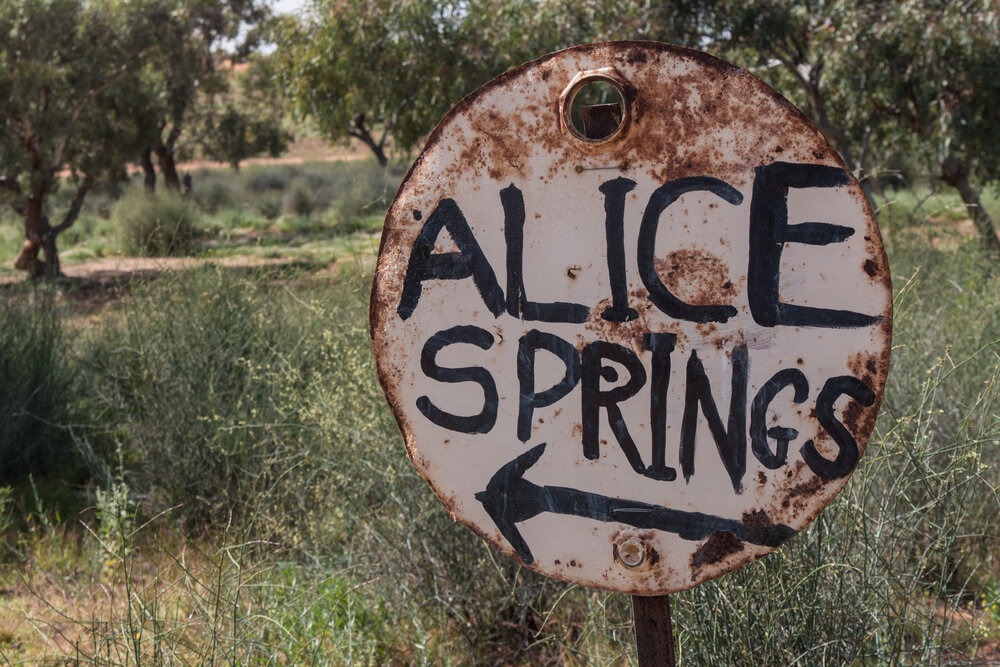 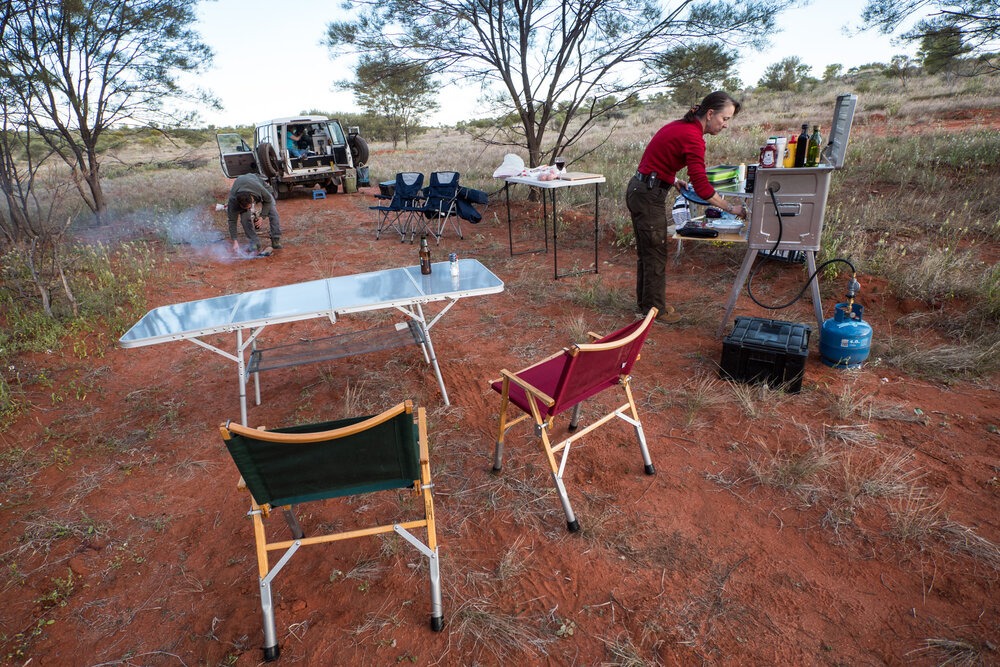 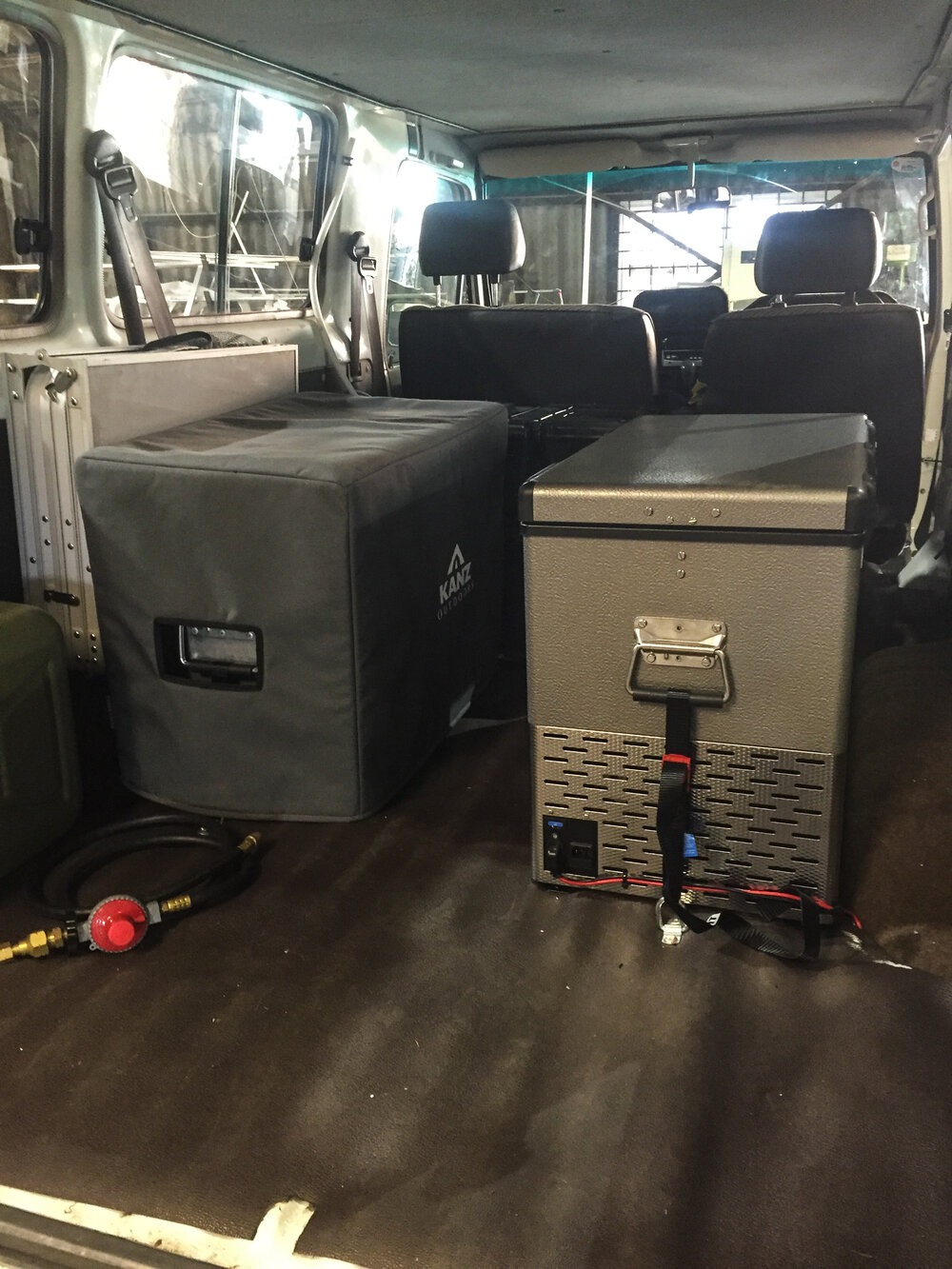 Kanz Kitchen, National Luna Weekender fridge, and Wolf Packs lashed down, since we didn’t have an interior build yet. | Jonathan Hanson

It is axiomatic that when traveling in underdeveloped areas of the world you never, ever drive at night. It’s also axiomatic that you always wind up driving at night. Given Australia’s abundance of 150-pound nocturnal marsupials with hopping gaits that crest at about windshield level, high-quality driving lamps are not just a fashion statement. Therefore we installed a pair of ARB’s Intensity 21 round LED lamps, which project a brilliant cone of light down the road, with none of the spurious violet fringing or dead spots of cheaper LED lamps I’ve used. They would prove their worth.

Our plans for that giant cargo area would have to wait, so for this trip we simply strapped in our gear, along with a National Luna Weekender combination fridge/freezer, hooked to an auxiliary battery and the solar panel. While Graham and I shopped for sufficient tools to assemble a basic kit (discovering that automotive tools in Australia are either complete rubbish or very, very expensive), Roseann and Connie supervised the rest of the provisioning. Then we set off on a three-day (and, inevitably, night), kangaroo-dodging blast to reach Alice Springs, followed by a ten-day crossing of the Madigan Line and its 1,100 sand dunes, during which both Troopies performed excellently — and returned an impressive 16 mpg U.S. in the sand, in four-wheel drive.

During this journey we spent a lot of time keeping notes on our wish list for an interior build, visualizing where the fridge and Kanz Kitchen would go, how much storage we would want.

All too soon we were on the plane heading back to Arizona, but by the time we landed we had sketches ready to send to Daniel for a custom interior and additional accessories — and in six months, a plan to return to explore even farther down under: Tasmania.

Look for Part 2 in August’s Field Notes. We’ll also be hosting a Tour of the Troopy during the August 8 Overland Expo Virtual Summer 2020 edition.