Sometimes the best-laid plans fall victim to work projects, uncooperative weather, and other inconveniences that dot our lives. For example, my wife and I had planned to explore the Smoky Mountains during peak “leaf season” this year, but the trip wasn’t quite what we expected. While the national park is often inundated with tourists, plenty of backroads and small mountain towns offer the same experience without the crowds.

While we aren’t as dedicated as the leaf peepers that follow the changing of seasons for weeks at a time, we still wanted to dedicate some time to warm tones while they were around. This desire came in part from a need to unwind after a jam-packed couple of months and by the fact that the last couple of autumns had been rather lackluster. Last year the southeast suffered an unseasonably dry fall, and the leaves seemed to turn brown and fall in a matter of days. The year before, several storm systems stripped the branches before the colors had a chance to hang around for very long. As this autumn approached, the unseasonably warm temperatures seemed determined to prove the peak color predictions wrong. So despite the lingering summer, we picked a Saturday, loaded up the Subaru with a few supplies, and hit the road.

Our first destination was Hot Springs, North Carolina, known for its namesake hot springs and the Appalachian Trail passing directly through the main street. This small community is full of artistic shops, restaurants, and outdoor centered activities. It’s perfect for a day trip, or even longer if you have the time. 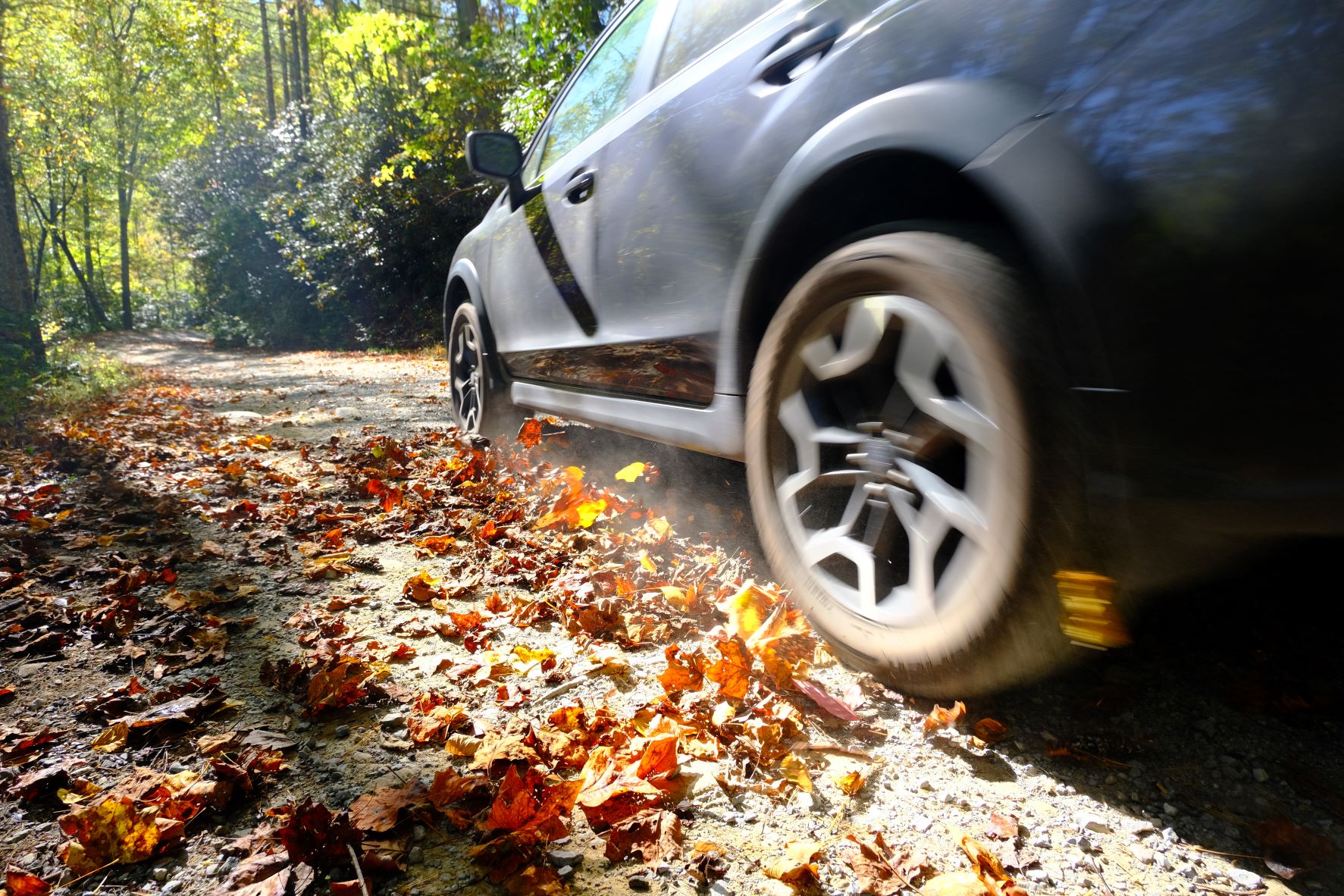 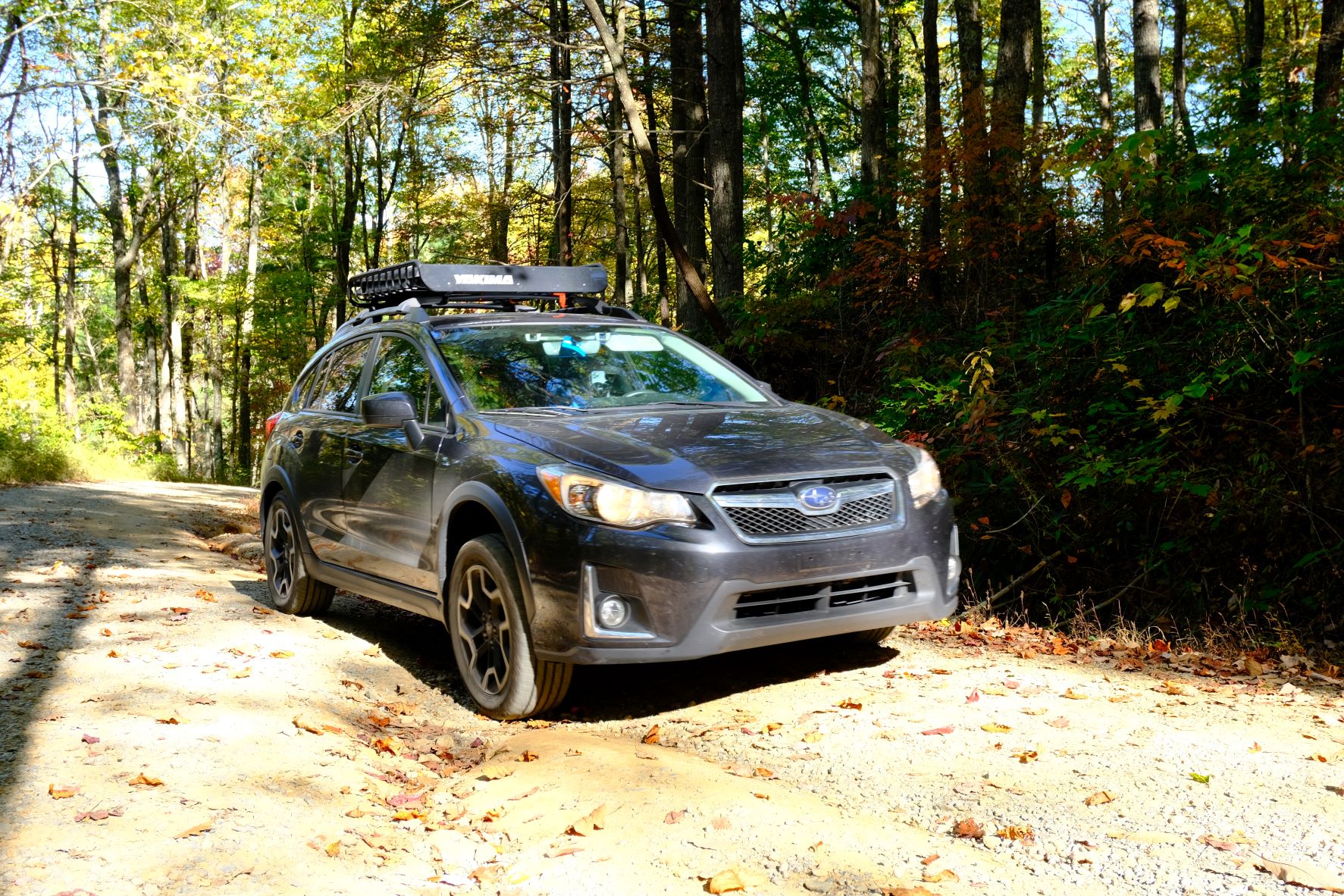 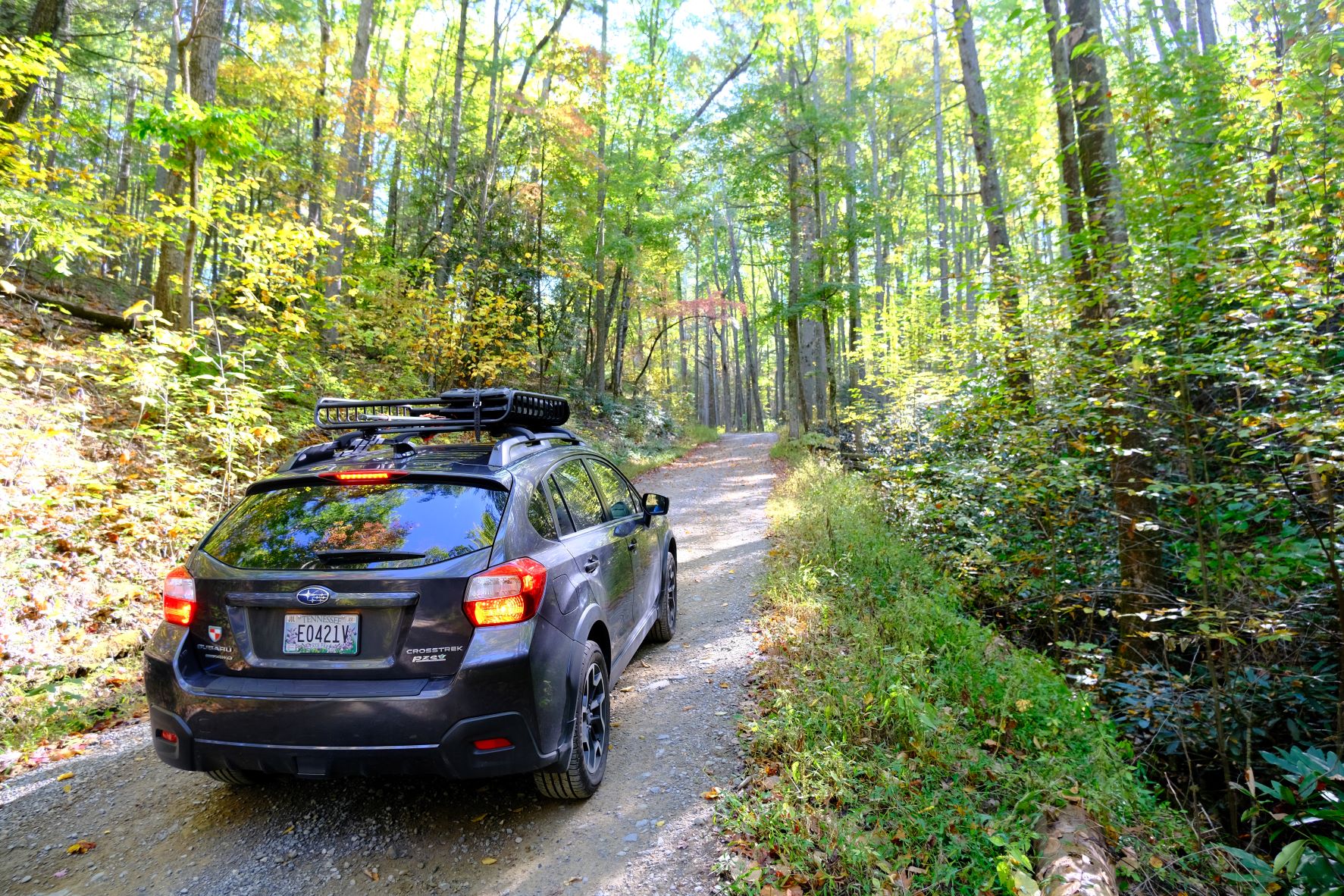 While the interstate offers an acceptable route from our home to Hot Springs, we chose to cross the mountains along the border of Tennessee and North Carolina in a slightly more adventurous fashion. We finally left the pavement just outside of the Paint Creek Campground in Cherokee National Forest. Our route along Hurricane Gap Road was hardly challenging, but the gravel climbing over the mountains was a pleasant adventurous alternative to the paved alternatives. As we gained elevation, we were surprised to find the trees as green as they were in the valleys below.

Along Hurricane Gap’s winding curves, we spotted a few trees showing off amongst their green neighbors. We usually adventure in a modified truck, so we had to remember to watch for potholes and washouts. Our Subaru is plenty capable, but it’s also mostly stock. We didn’t want to take a chance on bottoming out or popping a tire. This wasn’t the kind of trip where we were looking to venture into type 2 fun.

As we crossed the gap and began our descent into North Carolina, we made a quick detour to the Rich Mountain Lookout Fire Tower. This tower was originally built by the US Forest Service in 1932, and it was staffed full time until the 1970s. As with many of the fire towers in the region, it fell into disrepair once it was unattended. Then, in 2018 it was restored by local nonprofits and now provides nearly 360-degree views of the Appalachian Mountains.

At the peak, we found a few varieties of trees that were starting to show their vibrant fall colors. The sassafras growing along the edge of the road had turned a vibrant yellow, a single oak was bright orange, and a few small maples were starting to show a golden hue. Even though the majority of the trees were still green, we lingered awhile and took in the views. 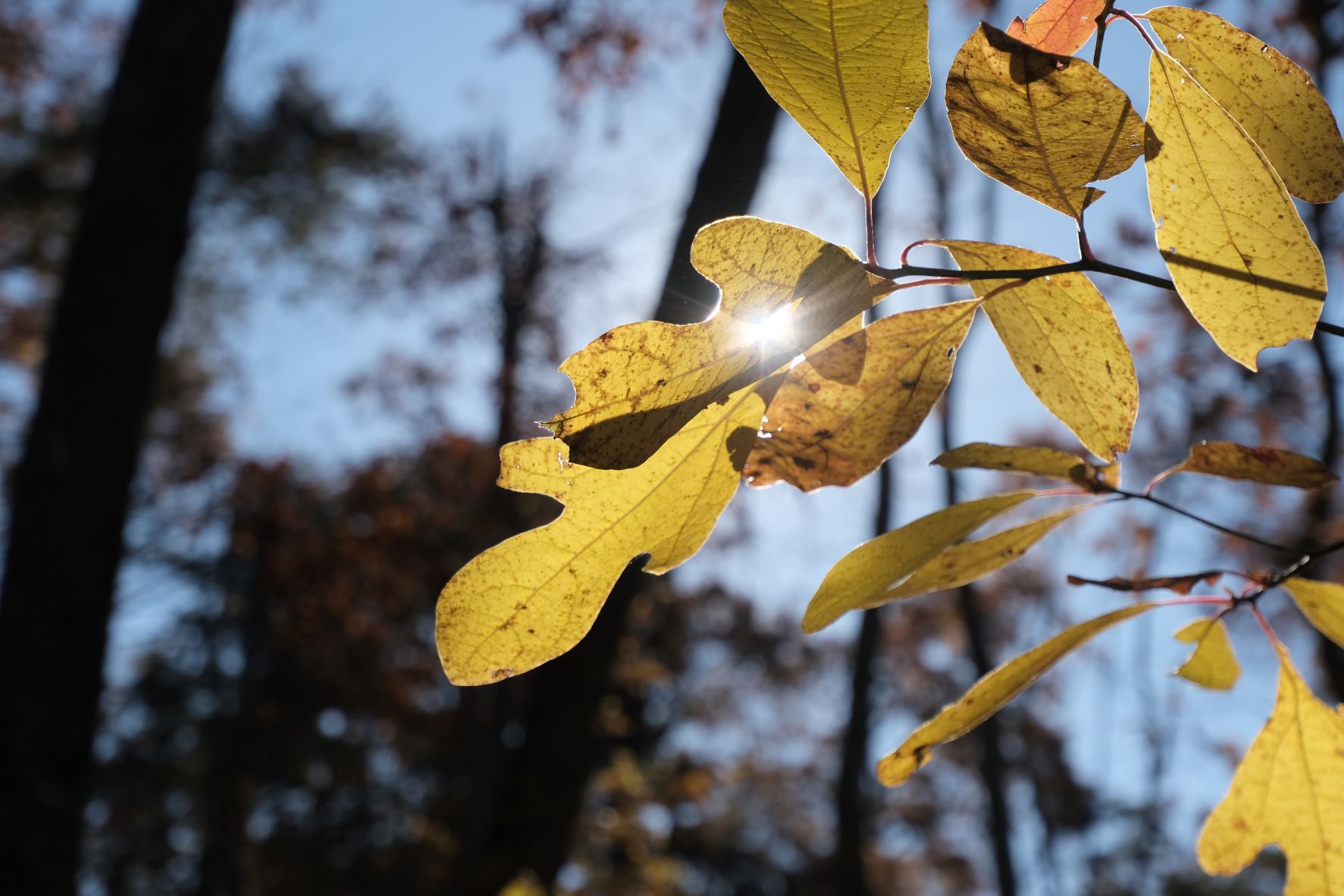 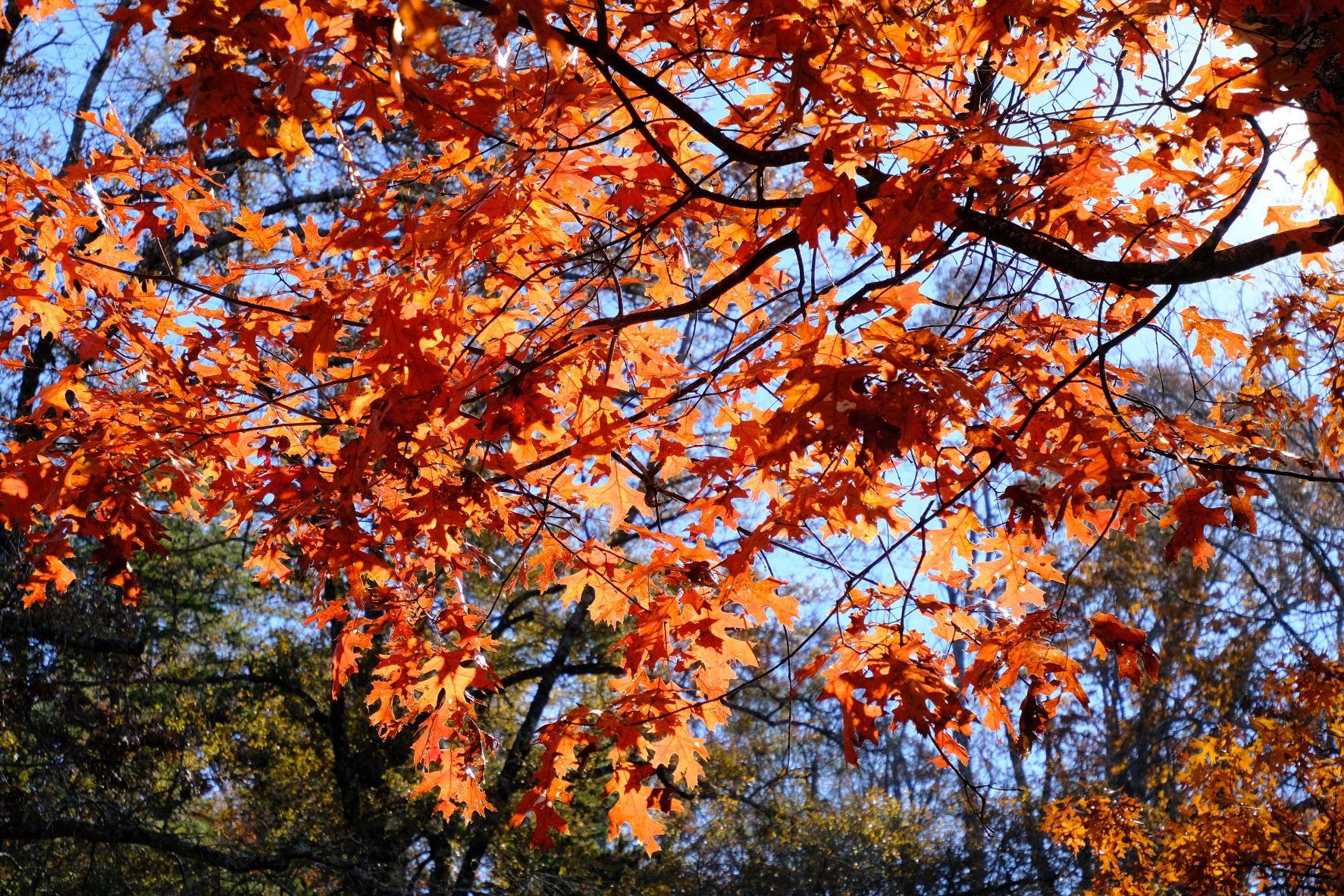 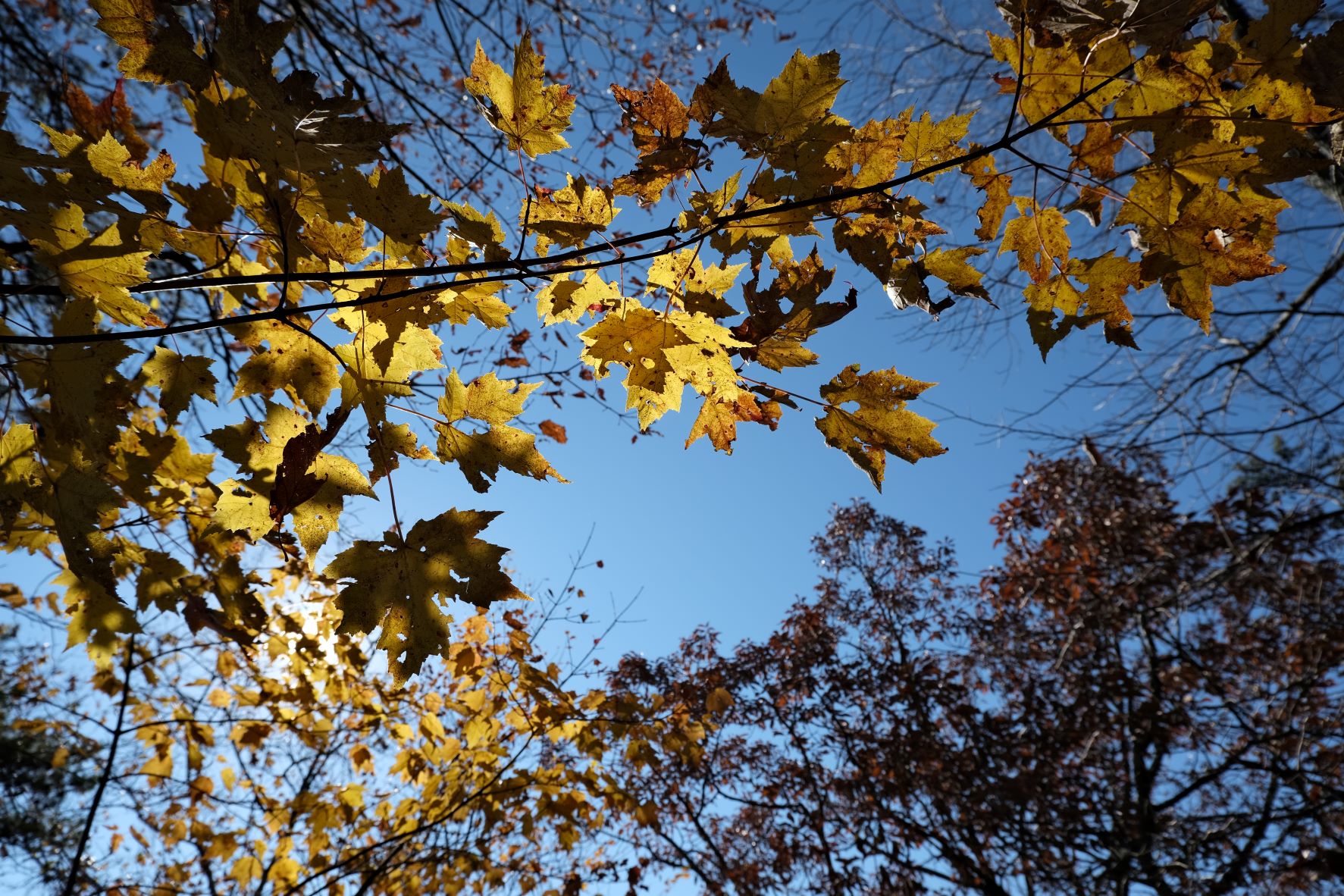 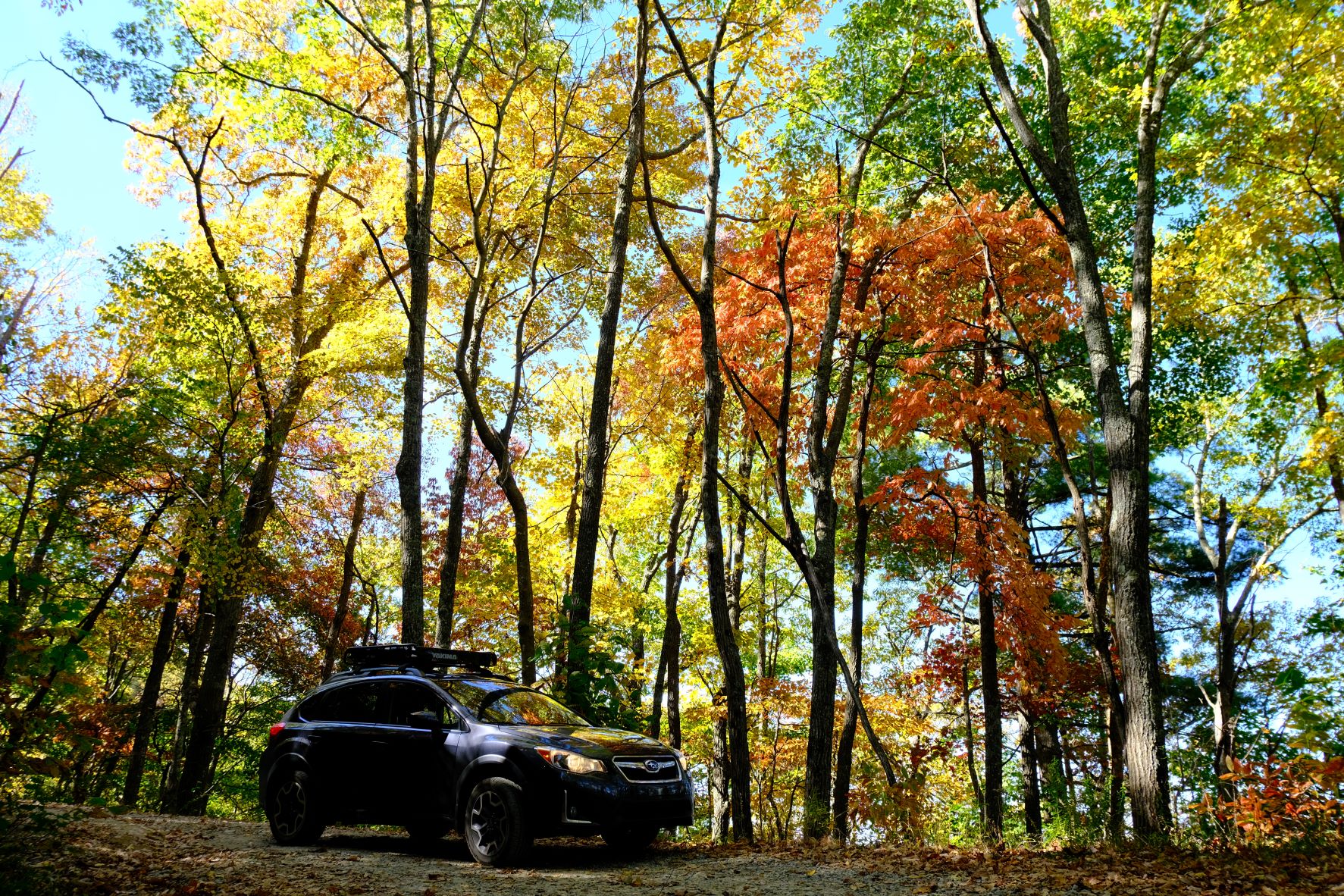 We could see peaks across the valley from the tower, but it wasn’t until we grabbed our binoculars that we really started to dissect the landscape. With the Swarovski Optik NL Pure binoculars, we could pick out details dotting the mountainsides. We spotted farms tucked amongst the endless acres of trees, cabins looking out over the mountain ranges, and thin roads crisscrossing the landscape. As we traded the binoculars to scan the mountains, we dreamt up plans for longer trips to explore this little piece of Appalachia further.

The 8x magnification provides a crisp image with a 492-feet field of view at 1,000 yards. This level of magnification is great for all-around use, from bird watching to inspecting distant landscapes. The NL Pures also feature ± 4 diopter adjustment and eyeglass compatible eyecups for those of us with less than perfect eyesight. Hopefully, it’s never needed, but just in case there’s an aquatic mistake, the NL Pure’s are waterproof rated to 13-ft. All of this is packed into a 23-ounce package. 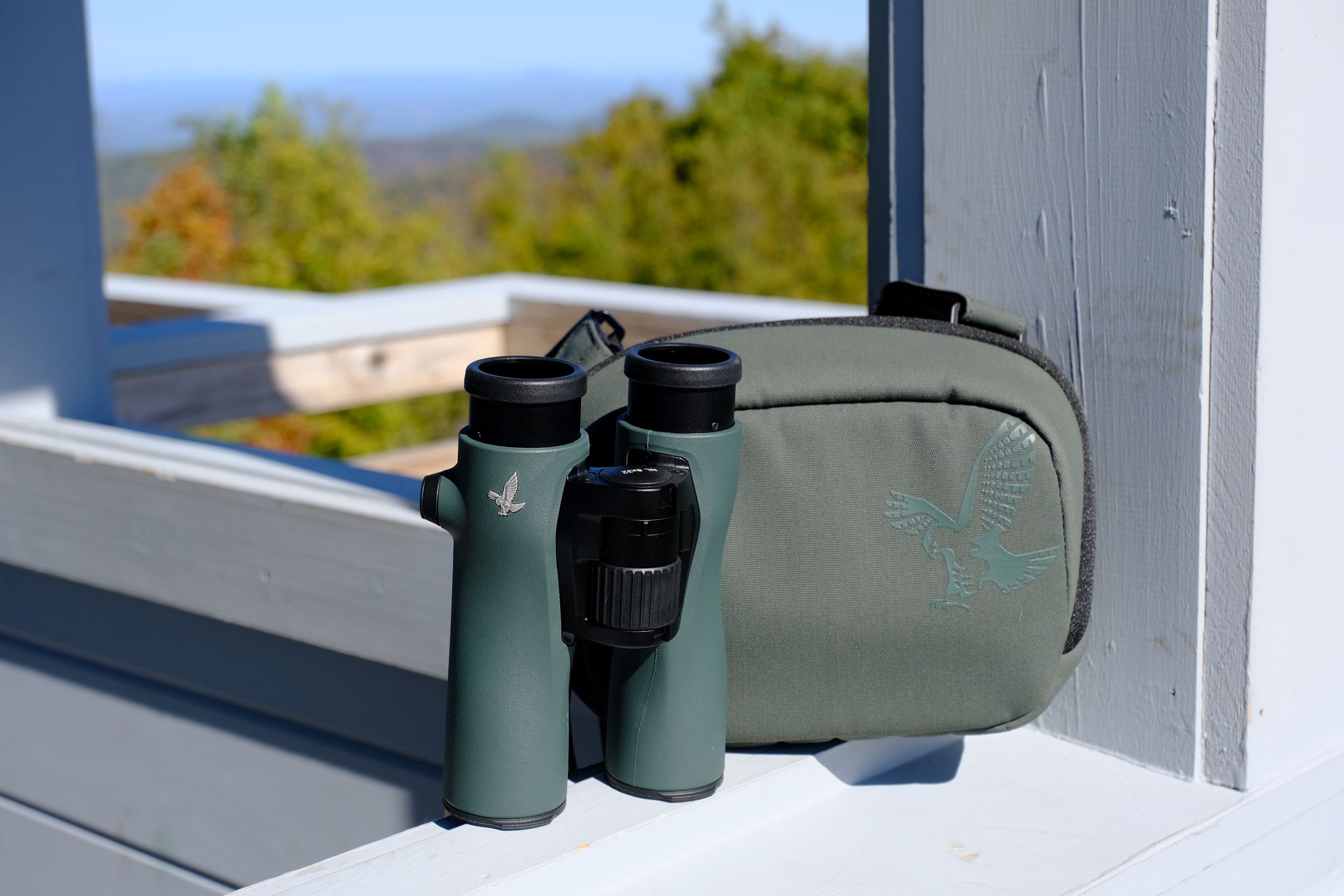 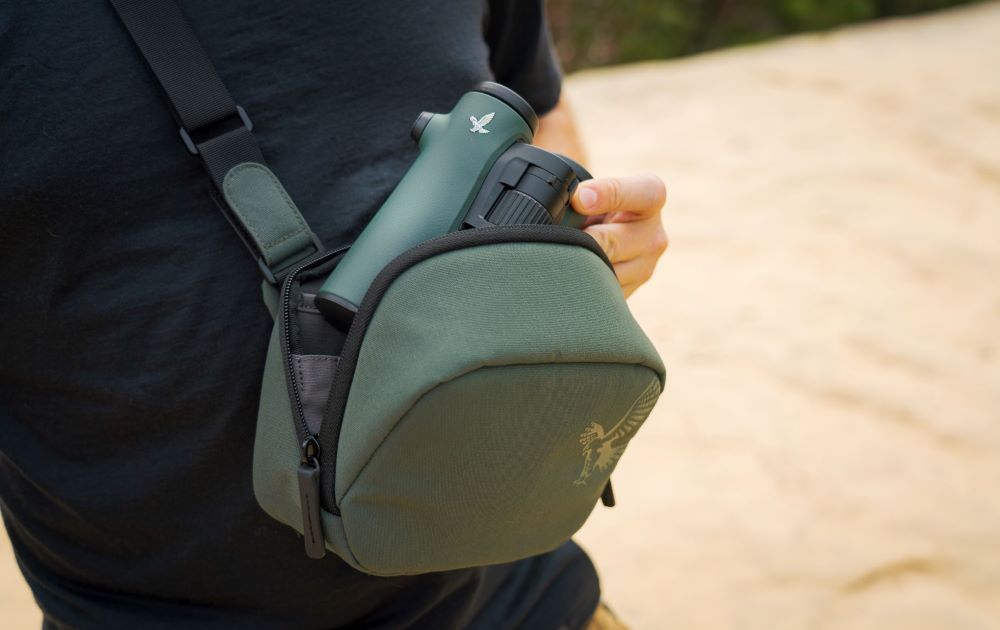 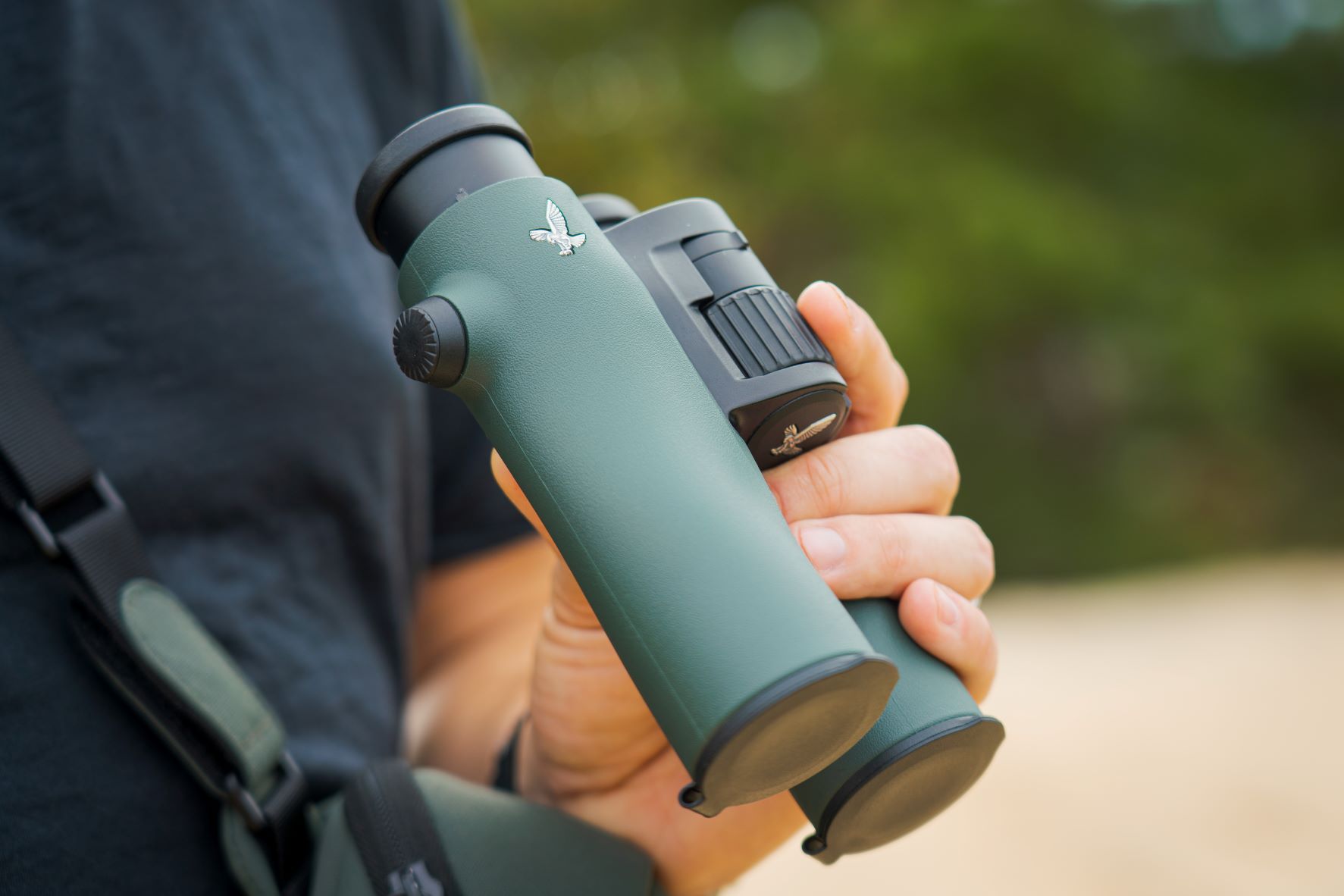 The NL Pure’s carry case is padded, and the wide zipper opening allows for easy access. The shoulder strap is removable and pivots for comfortable carry. For times when I want to go sans case, the neck strap mounts to the body of the binoculars and alleviates the swinging motion found on other mounts.

The most striking feature of the binoculars is the clarity provided by the lenses. As soon as they’re properly focused, the sharp lines of the subject jump out at you. The image quality is truly like none other, and it’s easy to see why Swarovski Optik has been in business since 1949.

After we had our fill of the sweeping views, we returned to the Subaru and headed back down the mountain. At a wide spot in the road, we pulled to the shoulder and unpacked our coffee kit. Once the camp stove was off, the sounds of leaves spirally out of the trees and the occasional scurrying animal amongst the rhododendron were all that we could hear. After our roadside brew had satisfied our craving for some caffeine, we continued into town.

We arrived in Hot Spring around 11 AM as the sun finally climbed above the surrounding mountain ranges. As we milled around town visiting shops, the art fair, and local eateries, it felt more like a summer morning than fall. I pondered how any plans that involved the natural world are often no more than wishful thinking. I’ve been on fishing trips where it rained for 18 hours straight, fall camping trips where the humidity and heat neared tropical levels, and a winter bikepacking trip where the temperature hovered in the 60’s. But, I suppose that’s all part of adventuring and becoming a part of the landscape, even if you’re only immersed in it for a short while.

As we made our way back home, we took a paved route but still avoided the interstate. Even though the leaves weren’t ready to show their full fall colors, we still felt like we made the most of the day. We had enjoyed some coffee in the backcountry, watched birds dart amongst the trees, planned future trips to check out the areas we spotted from the tower, wandered through miles of forest roads, and explored a new town. When life seems busy, and you’re darting from one thing to the next, a day trip into the mountains can be just the thing to hold you over until your next outing.