General Tire’s Grabber X3s Are Like an Overland Cheat Code

“I don’t think you’ll make it,” Winslow said. “Look at the size of that tank trap. They really don’t want you going down there.”

“Only one way to find out!” I replied, as I slammed the door on my Gladiator and slipped the transmission down into drive.

Aiming at an angle, I summited the front side of the tank trap one tire at a time. The driver side wheel dropped into the chasm first, followed by the second. Both front tires were in the trench before the rears reached the face of the rise — evidence of the Gladiator’s huge wheelbase.

Eventually, they too dropped in, as the General Grabber X3s at the front dug into the soft soil and pulled the rig through. Shortly thereafter, the rear tires took their turn clambering up the backside of the trap.

“Piece of cake!” I boastfully hollered out of my window, looking at my bewildered friend in the side-view mirror.

My buddy, Winslow, stood there and scratched his head. “Touche, I suppose,” he muttered.

This was a scene repeated many times over the last several months. Sure my rig would be unable to summit or overcome whatever obstacle I pointed it at, I gently put my foot into the throttle and gave it a go anyway. Time and time again, the tires found traction and pulled the rig through, unlocking whatever scenic flower-filled field or windswept valley lay ahead.

Sometimes it felt like having a cheat code. I felt like I was breaking through whatever coded barrier the design team had created that prevented me from going any further. Because of my tires, I was able to overcome the seemingly impassable barriers and explore the secret world beyond.

But it’s too early to wax poetic yet. I need to set the scene a bit more — and explain the purpose of my journey.

For Gear Chronicles, I typically like to take a piece of gear on an extended journey in order to evaluate it. Tires, though, can’t be easily evaluated in a single weeklong overland excursion.

You have to live with tires a bit to get a feel for them. An overlander must air a set of tires up and down a handful of times, bounce them off some rocks, and put some highway underneath them to get a real sense of their wiles.

For this Chronicles, that’s exactly what I did.

I’ve compiled my thoughts from a series of overland adventures over the course of several months. Take this tale for what it is, an amalgam of three or four trips.

When I was living in Detroit, Michigan a few years back, I bought a second-generation Isuzu Trooper out of Los Angeles for $2,500. I had it trucked to the Wolverine State to build as a bargain overlanding rig.

The thing was in good shape, but hadn’t been serviced in any meaningful way in years. So, I blew the whole front end apart. In my driveway, I installed new axles, wheel bearings, brakes, ball joints, heavy-duty tie rods from an F-150, and finished it off with a fresh pair of AISIN locking hubs.

Once I knew it was road worthy, I cranked up the front torsion bars (the poor man’s lift) and properly lifted the rear with some Dobinsons coil springs.

Then I ordered new tires for it. I went for a set of five 33-inch General Tire Grabber X3s. I credit these tires for earning the rig’s nickname, “Super Trooper” — other guys on the trail gave it that moniker, not me.

I was massively impressed with the tires. They rode incredibly well on the highway and were just unbelievable in mud and snow. I never got stuck, not once, even in the deep bogs of Michigan. I hit trails that only dudes in tripled-locked FJ80s rolling on 37s could conquer. I just kept my foot in it, and the X3s did the rest. I loved cheap-o rig. But I loved those tires more.

When it came time to outfit my 2020 Jeep Gladiator Rubicon this year, I beelined it right back to the X3s. This time, I went a bit bigger than I had with the Trooper: 37s (37/12.5R17 to be specific). They’re the biggest tires I’ve fitted to any vehicle, overlander or otherwise.

They’re big. They’re half as tall as a six-foot-two-inch-tall man. They weigh 77 pounds each. And that’s before they’re wrapped around a wheel. They’re harder to pick up off the ground than a wild boar and they bite twice as hard. Well, at least on rocks anyway. 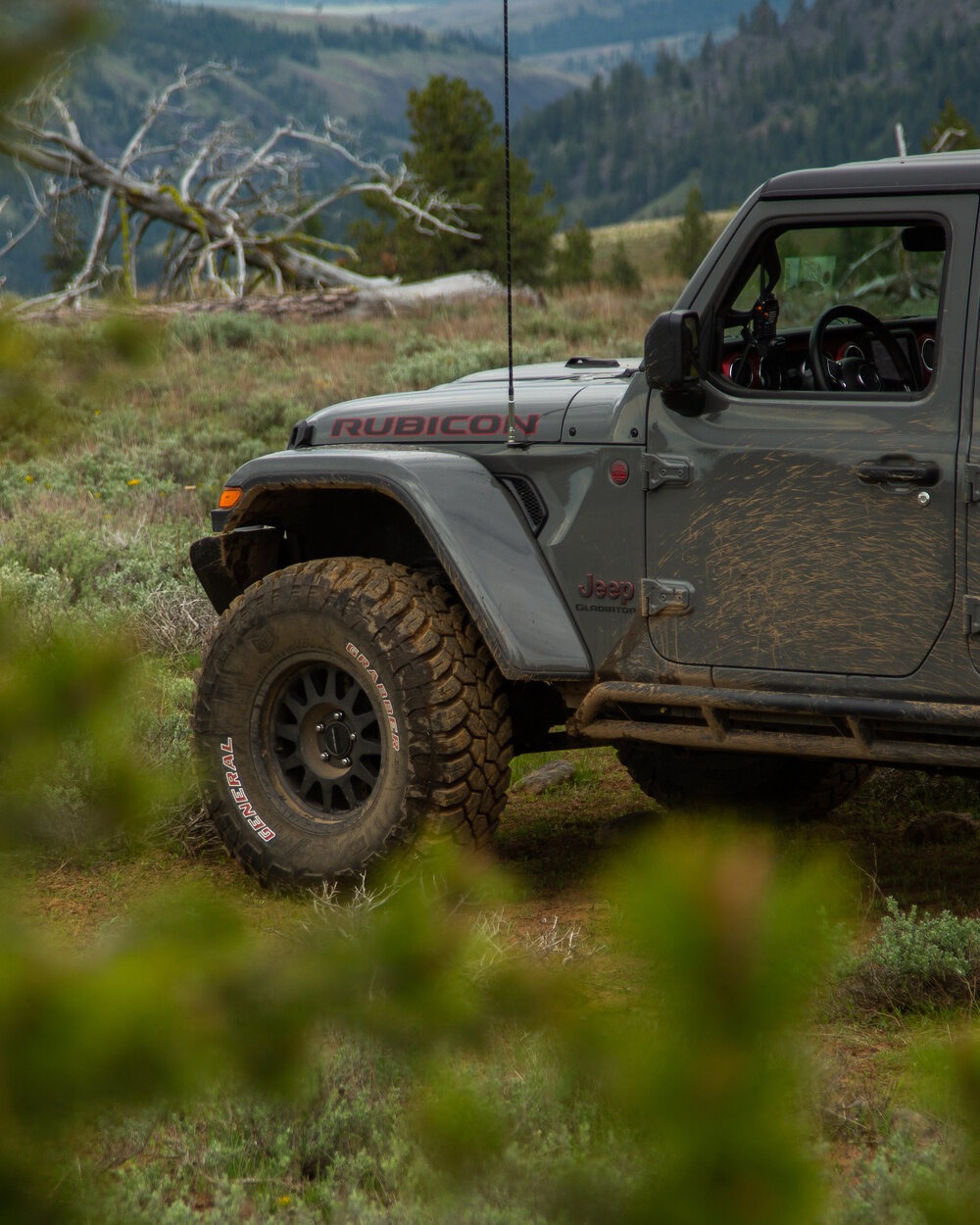 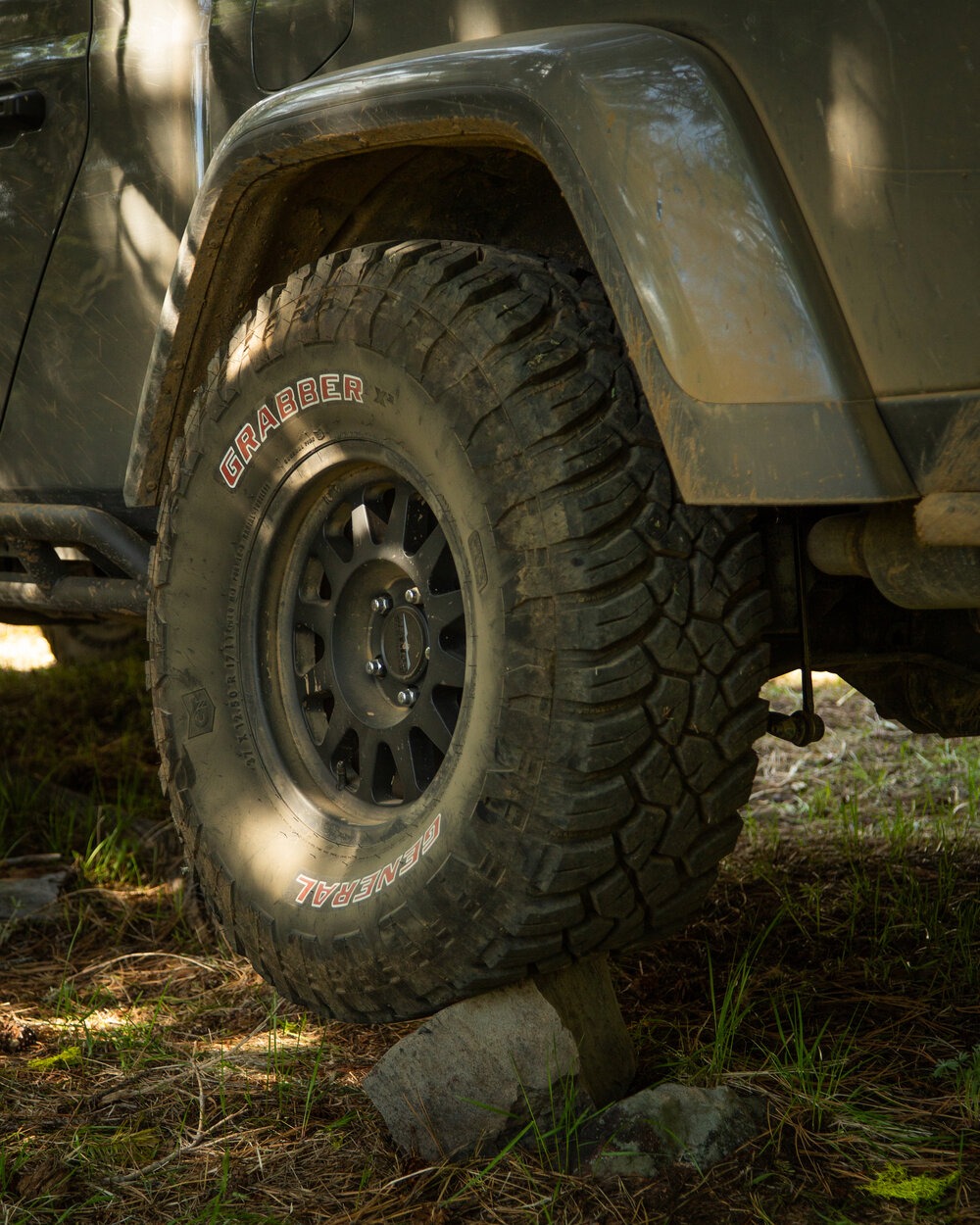 Have to level out the truck at night somehow. | Nick Jaynes

You, too, would have been surprised to see the Gladiator get through this hole. | Nick Jaynes

And there’s good reason. The General Tire Grabber X3s feature sidewall protection lugs that help grip the ground even when the main tread is overwhelmed or busy dealing with its own stuff. Although it’s technically a mud-terrain tire, the tread has been siped. This helps tremendously in wet surfaces. The rain-drenched highways like we get here in the Pacific Northwest are no trouble for the X3s.

Perhaps best of all, since my Gladiator is also my daily driver, the X3’s multi-pitch pattern keeps them relatively quiet on the freeway. I was immediately impressed and grateful that the X3s don’t howl at 65 miles per hour unlike other M/Ts I’ve driven.

I assumed that rolling 37s at freeway speed would be like piloting a steamboat down the Mississippi. I imagined myself sawing at the wheel left and right just praying to keep the Gladiator between the lines. To my surprise, it was not nearly as unwieldy.

Yes, there is definitely a difference between the on-road manners of Rubicon’s stock 33s and the 37s. It wasn’t as much as you might expect, though. There’s a gentle meandering, but not so much as to make you regret your purchase. But the rig was never going to roll straight — it’s a solid-axle Jeep. So, I see it as par for the course. 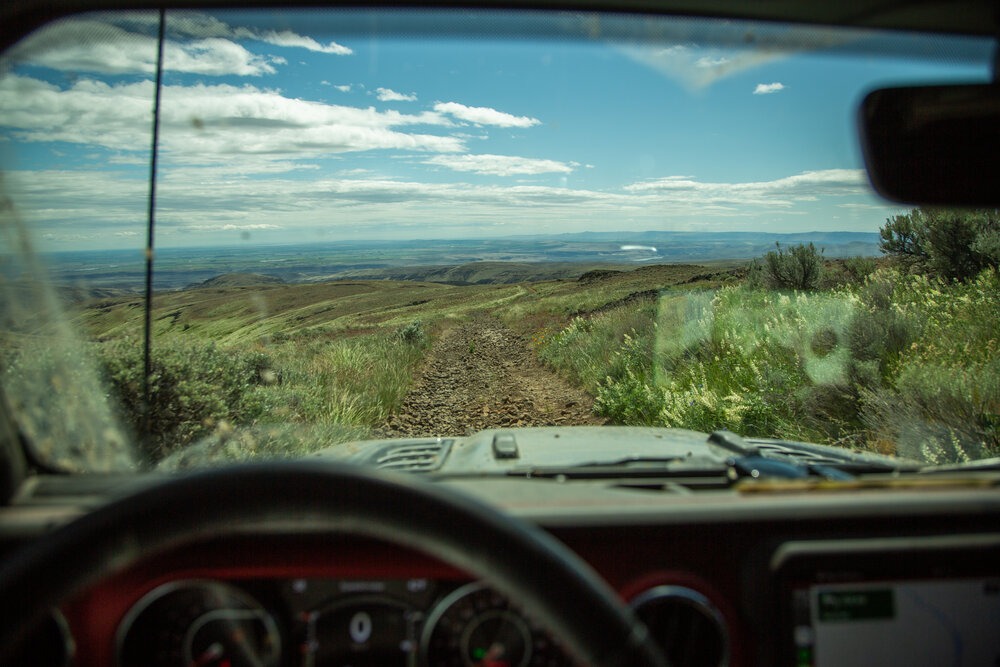 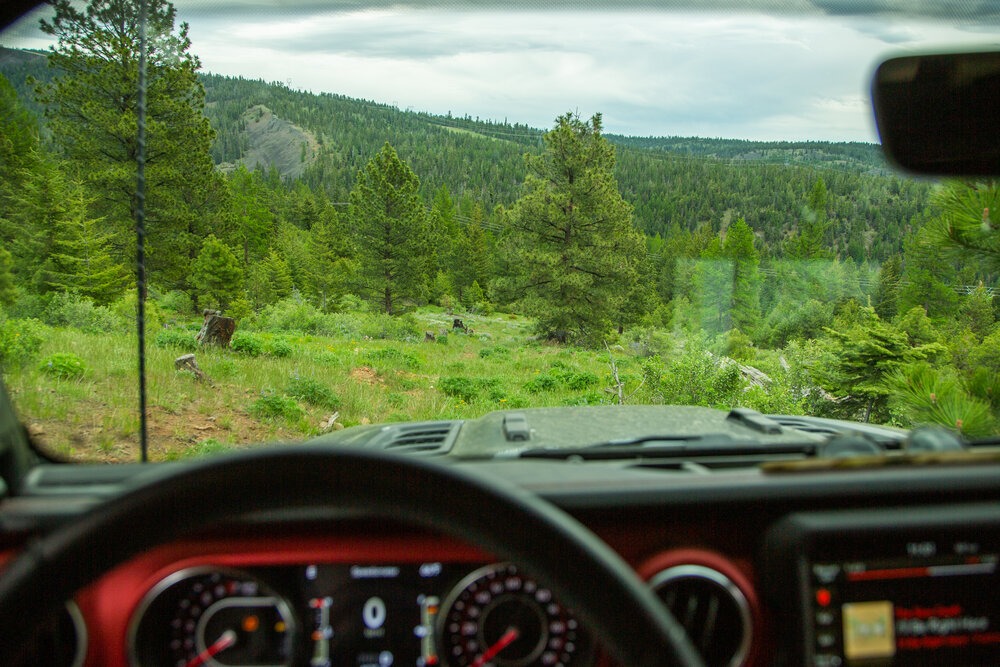 For the journeys on which I put the X3s to the test, I picked disparate environments and conditions, from volcanic rock to soft, water-logged soils to dusty gravel washboard roads to the sands of the high desert. Not only do I enjoy vast diversity in my overland journeys, I wanted to see if the X3s could be overwhelmed by the conditions.

A couple moments stick in my mind, like the one I used in the intro. 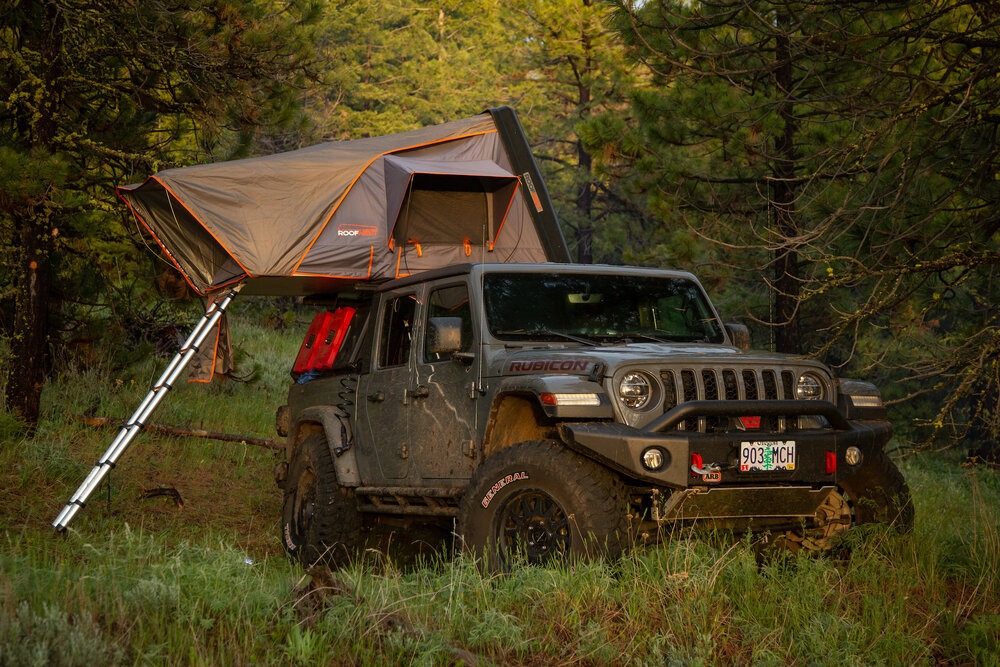 The campsite after the squall cleared. | Nick Jaynes 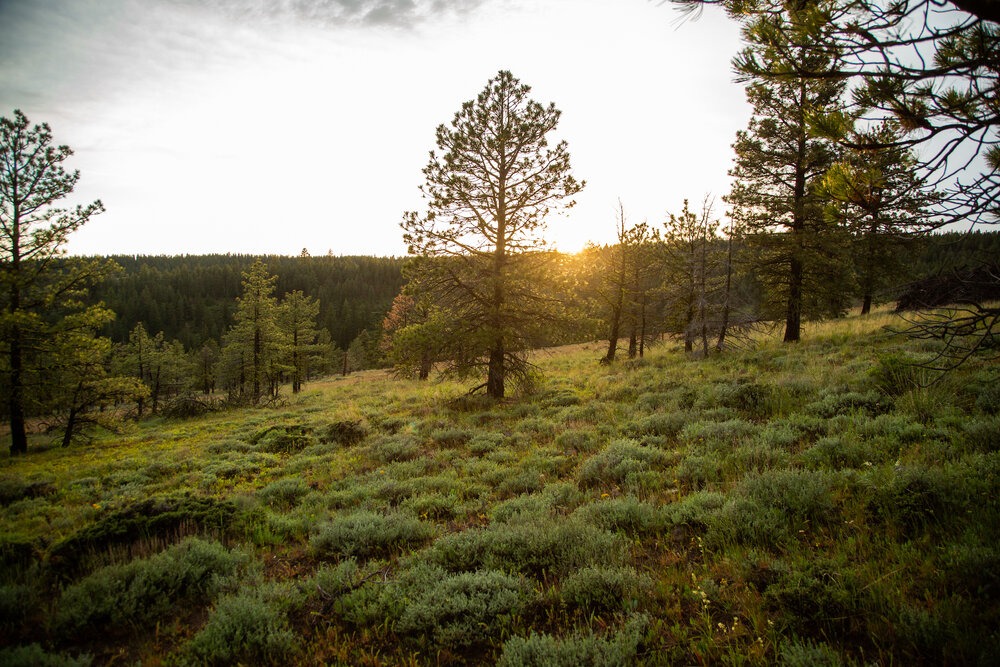 The view from my campsite after the squall cleared. | Nick Jaynes

Overcoming several massive tank traps crossing several fields and down a dry creek bed, I was able to find a little bluff that overlooked a lush valley. I was able to get my rooftop tent deployed just before a powerful squall set in. It blew so hard, half of my Roofnest Condor hard-shell clamshell rooftop tent lifted off the ground. It’s a bit bewildering to see my feet rising to greet me during a storm.

Perhaps the most memorable level the X3s unlocked for me was a clearing I’d spotted on the onX Off-Road app. I had to roll over some huge downed trees, climb a few boulders, and through a bog to get there. But when I did I was delighted to discover an acre of flowering bear grass. After setting up camp, I realized that if I had rolled up here a week earlier or later, the flowers would not have been in bloom and the field wouldn’t have been nearly as stunning.

That was one of those moments, as I watched my dogs explore the field in the golden light of an Oregon sunset, that I was really glad I upgraded not just to 37s but to the General Grabber X3s. I don’t just believe — I know — that I would not have found the campsites or had half the adventures I did this spring without those tires on my rig. 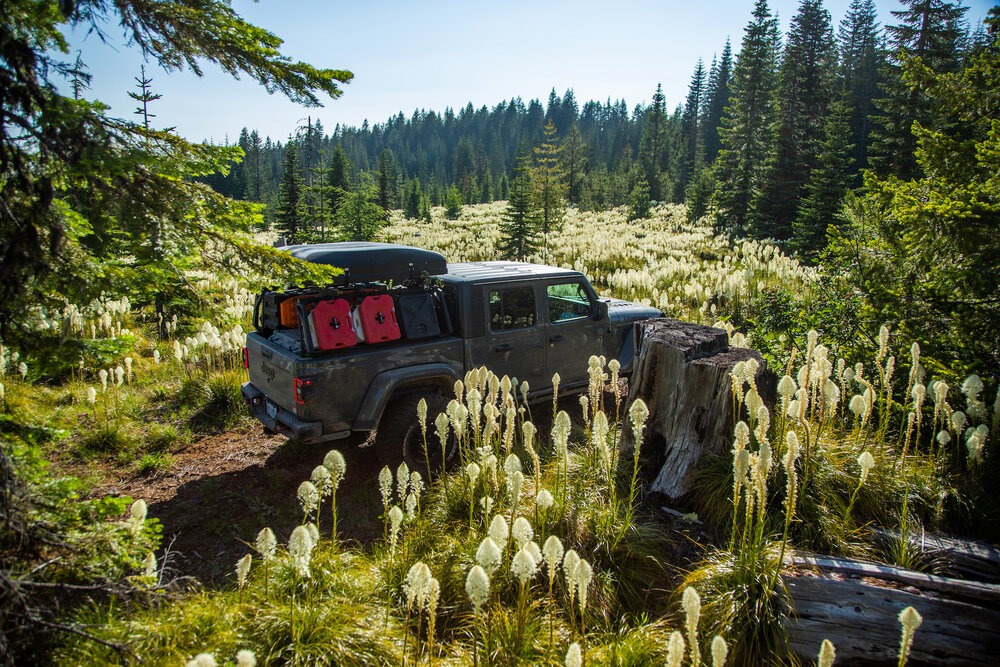 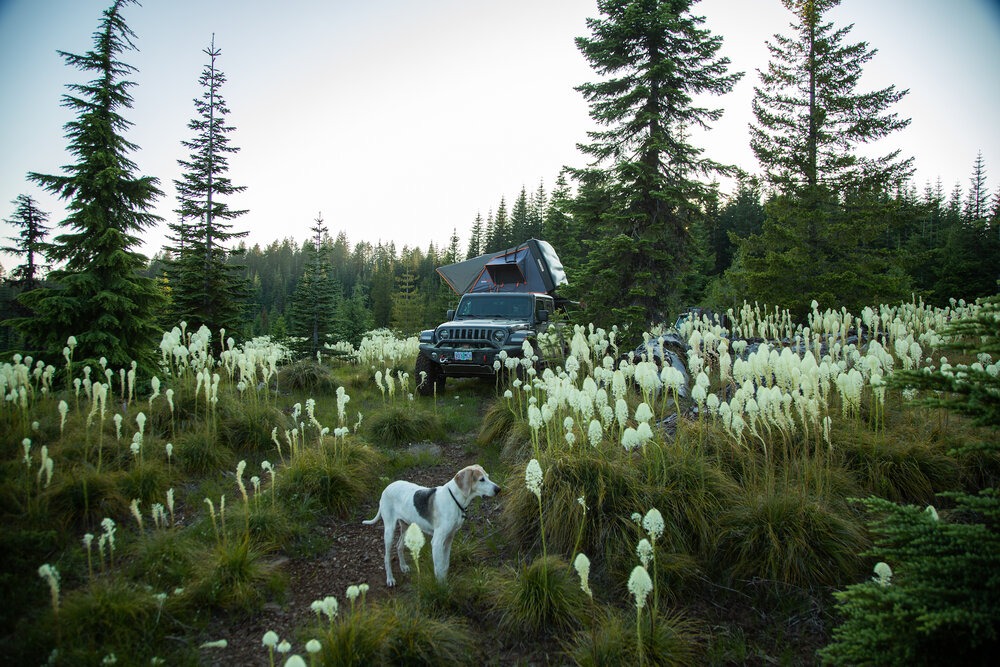 Virtually any automotive engineer will tell you that tires are the ultimate performance lynchpin — on-road or off. You can have the best suspension and tires and brakes on your rig. But without good tires, you’ll miss that upper echelon of performance.

Tires make all the difference.

Having taken that insight to heart, I’ve taken my tire selection seriously. I’ve run all types of mud- and all-terrain tires on my overland rigs over the last decade. All have left me wanting or letdown somewhere along the trail. So far, the X3s haven’t.

In fact, they’ve made available to me breathtaking scenery, spaces, and experiences I don’t think I would have discovered otherwise. More than make my truck look more bad-ass (and they do) or ride quietly on the highway (which they also do), the General Tire Grabber X3s have made my overland journeys better.

And there’s no higher praise I can give than that.