With a 6,000-kilometer shakedown outback expedition completed, the Troopy back in Sydney at the Expedition Centre with Daniel Fluckiger, and us back in Arizona, we embarked on a final round of long-distance modifications based on the specifications we sketched up on the plane en route home (we kept careful notes of all our “wants” and took measurements, created mock-ups on the iPad Pro using the Paper app and emailed them to Daniel).

Daniel manufactured a modular plywood cabinet/galley insert for the Troopy. But he altered it to our design, incorporating a spot to strap in our Kanz Kitchen: a chuck box with pot and dish storage, a drop-down work surface, and an ultra-rugged Partner Steel propane stove. The Kanz can be removed and set up on legs outside in fair weather, so we’re not confined to cooking inside. 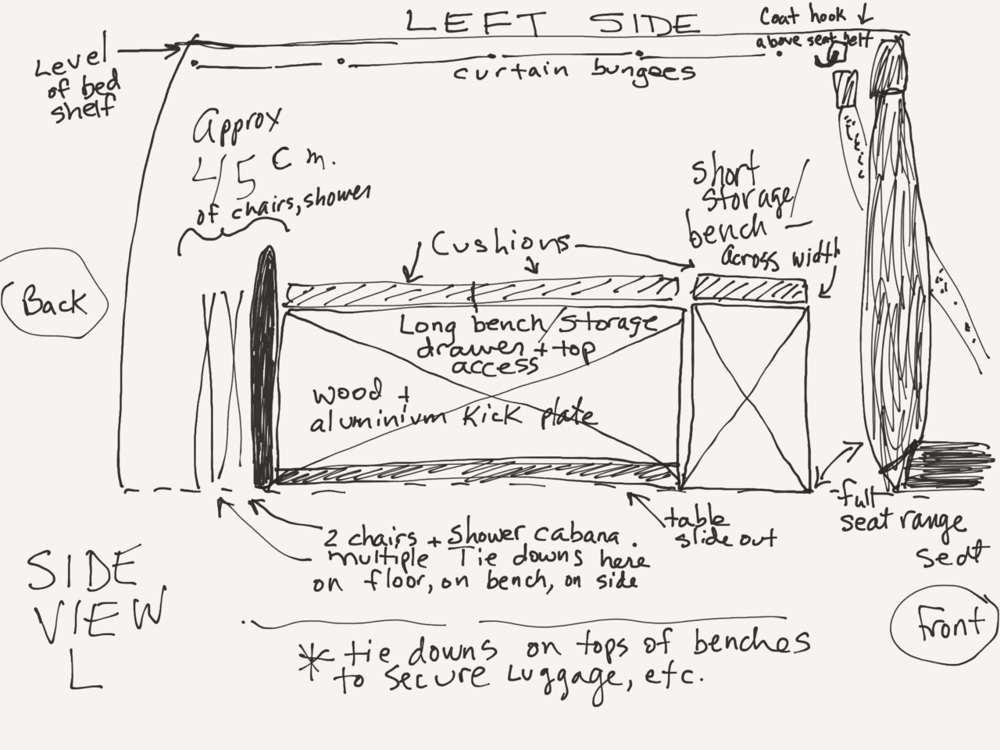 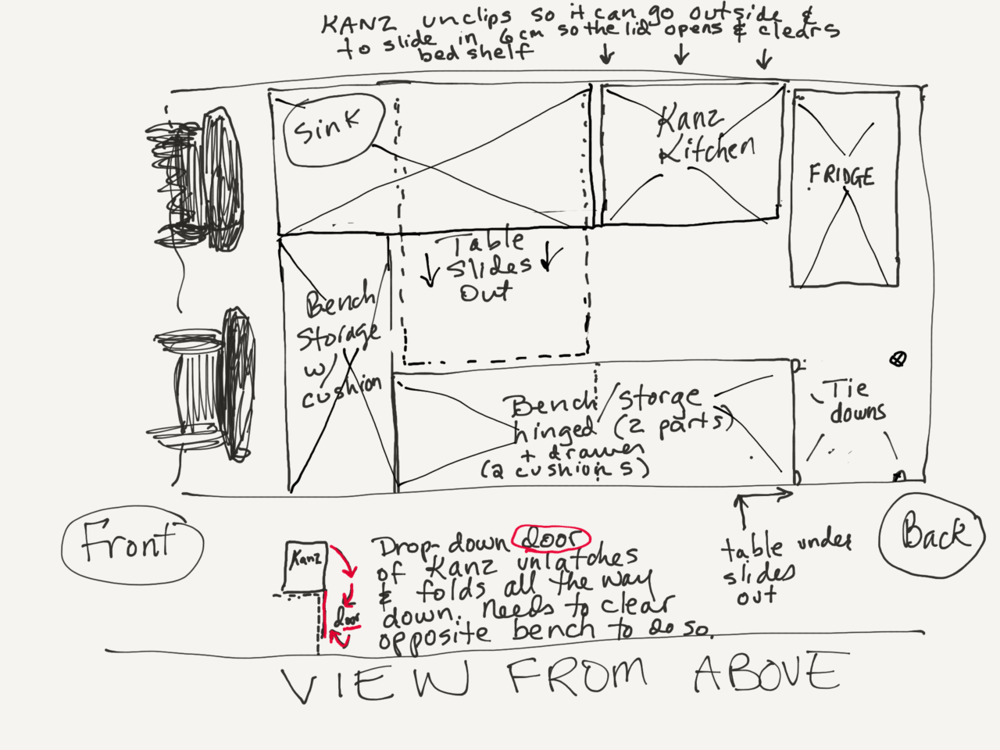 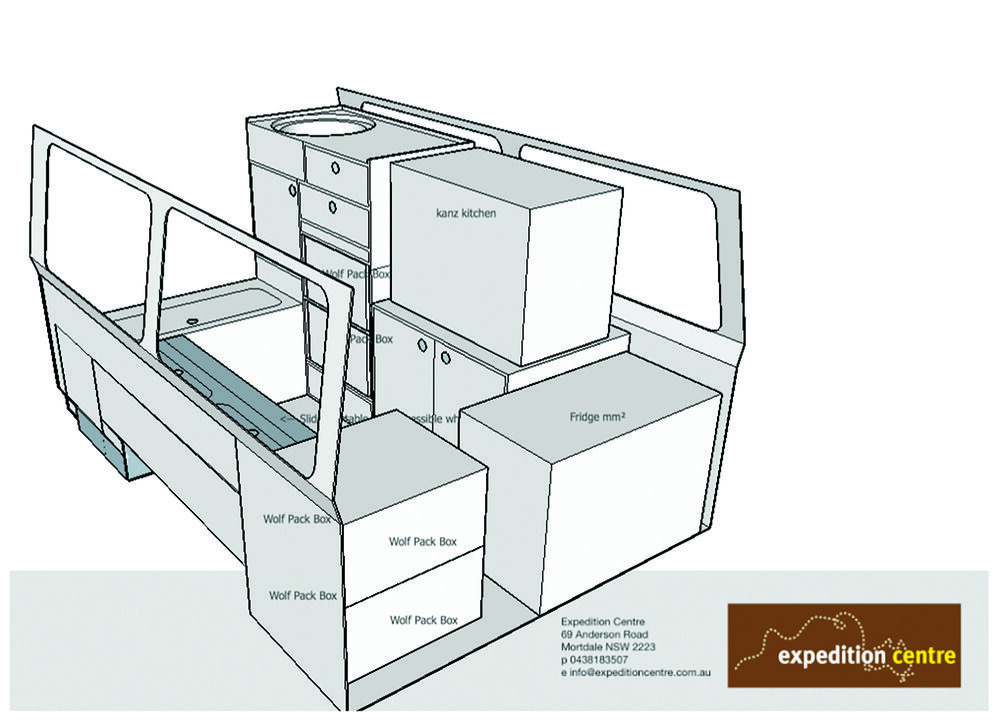 CAD drawing we received back from Daniel. | Photo: Jonathan and Roseann Hanson

The rest of the cabinetry included an L-shaped bench with huge storage underneath and a slot that stores a folding table for outside dining and work. On the counter adjacent the chuck box is a sink and faucet, which draws through an electric pump from a 59-liter (16-gallon) stainless-steel water tank bolted securely underneath the floor between the chassis rails, in the best possible spot for weight distribution. A digital readout below the sink shows the remaining supply, along with battery voltage level.

We wanted to make sure monitoring and maintenance of the various systems would be easy, and Daniel’s cabinet design had that covered. A recessed compartment directly behind the driver’s seat contains the water pump, solar charge controller, and the fuse panel for all the 12-volt accessories. Also hard-mounted there is an ARB Twin air compressor, which I had tested on the first trip and found to be one of the fastest units we’d ever tried. A high-quality compressor is key to being able to air the tires down and up for optimum traction and flotation — and, of course, for easy and fast tire repairs. The compartment has enough room left over to hold a tire plug kit and the remote control for the winch. 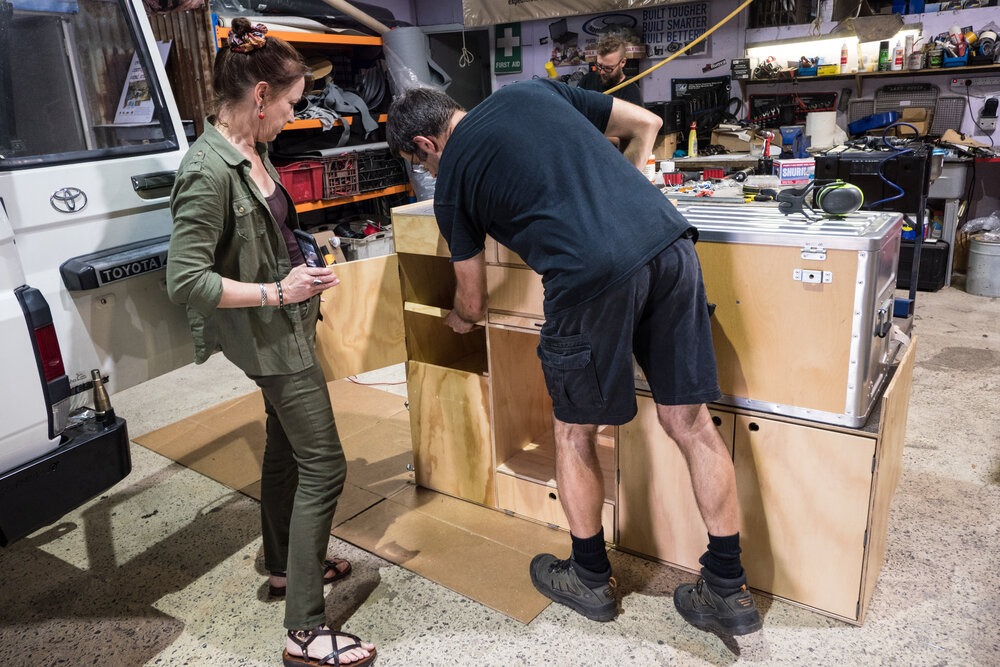 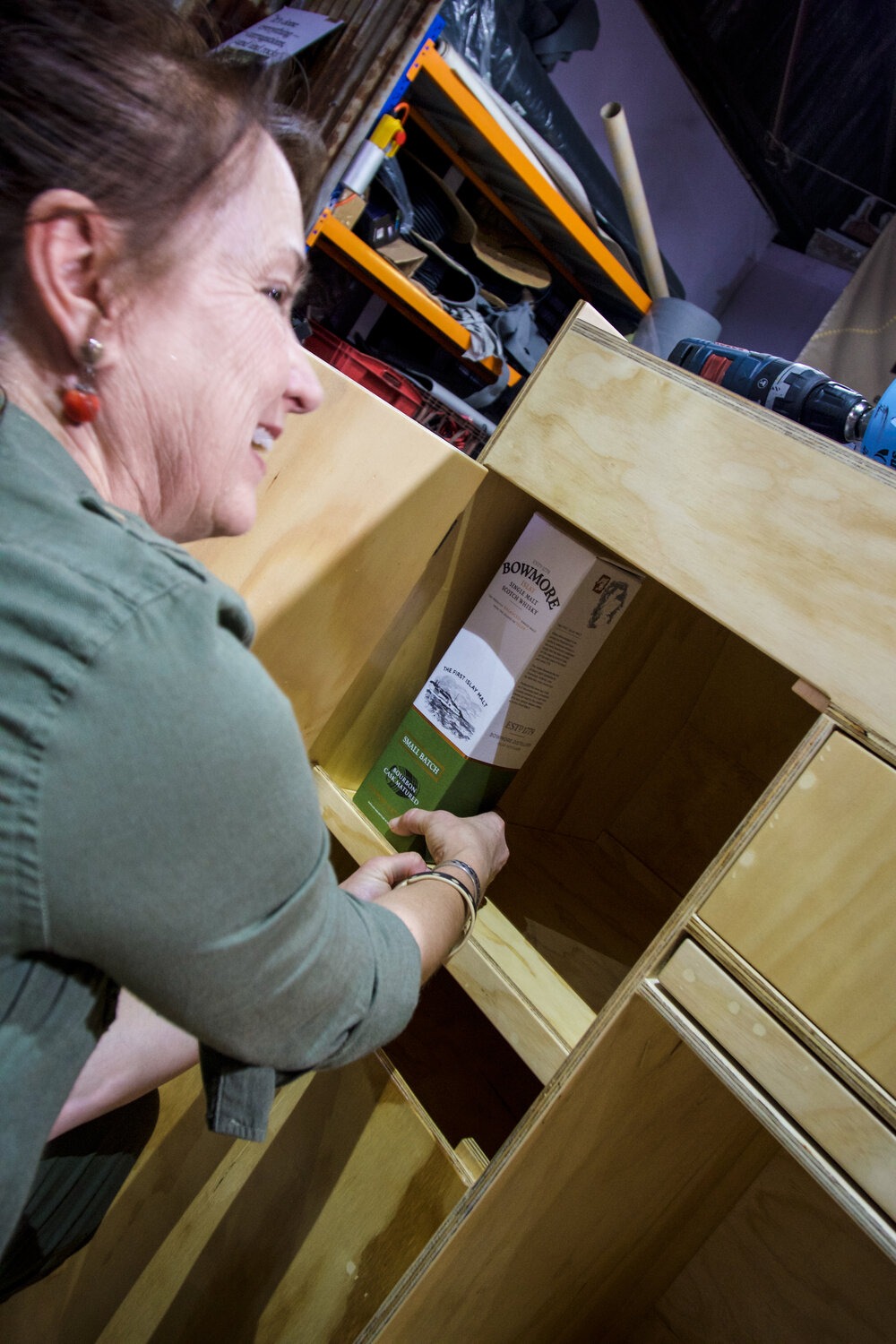 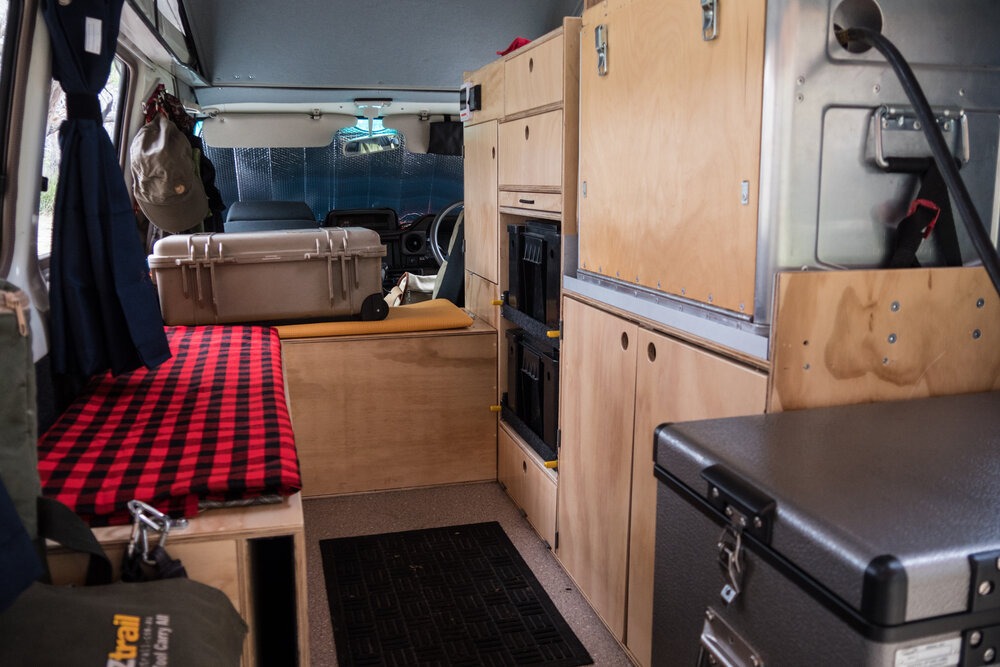 The installed cabinets and bench. The National Luna fridge is at the lower right; above it is the Kanz Kitchen chuck box. | Photo: Jonathan and Roseann Hanson 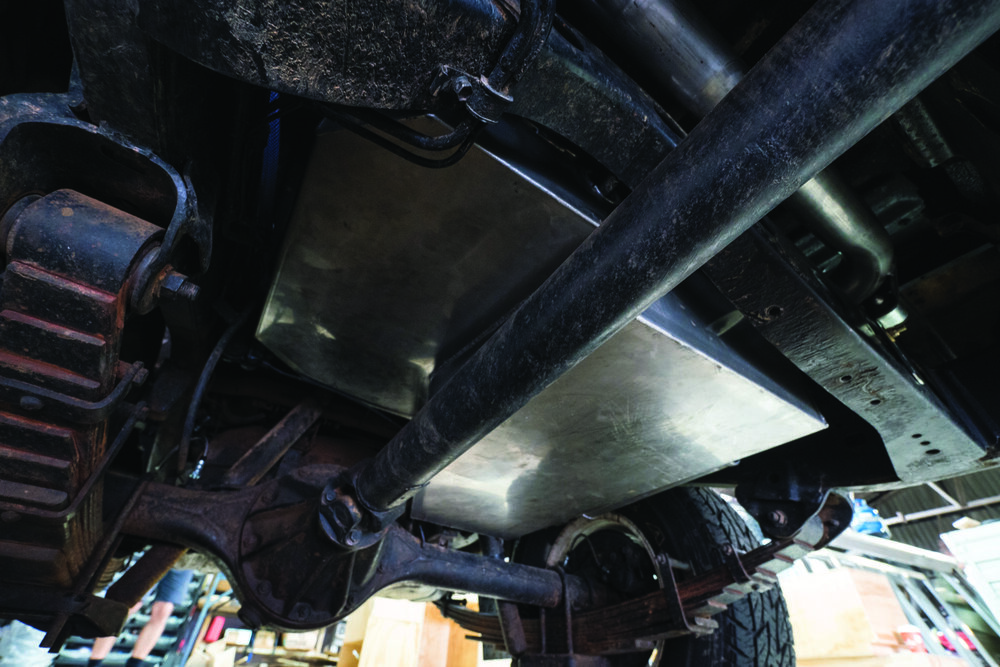 Our 6,000 kilometers had revealed serious deficiencies in the stock Land Cruiser seats, mostly from 24 years of what had apparently been proper beefy outback Australians using them. We debated having them rebuilt, but then decided that if this was going to be a long-term, long-distance vehicle for us it would be worth investing, so we ordered a pair of Recaro Specialist M seats with adjustable lumbar support. And, of course, the first thing you do after installing such expensive, beautiful seats is . . . cover them, so they don’t get dirty. A pair of canvas covers from SupaFit will do so while maintaining breathability.

For outside living, we installed an Eezi-Awn Bat 270 awning, which deploys in seconds from a pouch mounted to the left roof of the vehicle to provide 270 degrees of shade and rain protection.  Three extendable poles drop from the arms for support, and can be staked out in a breeze. If we need more protection or privacy, a pair of wall panels can be attached to any of the sides. 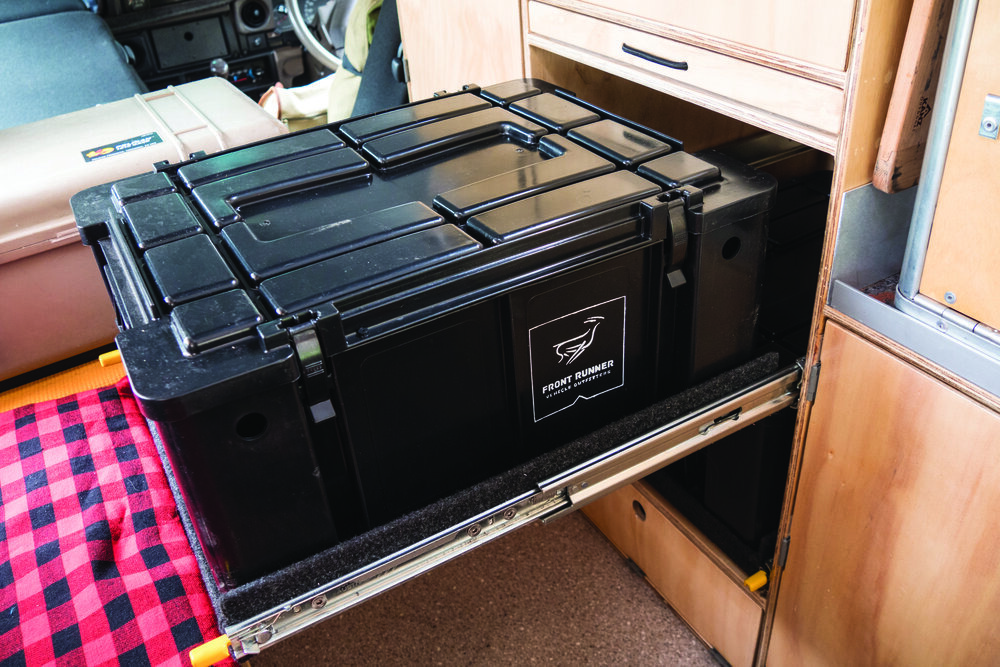 Wolf Pack kitchen storage boxed slide out on rollers, and can be removed for cooking outside. | Photo: Jonathan and Roseann Hanson 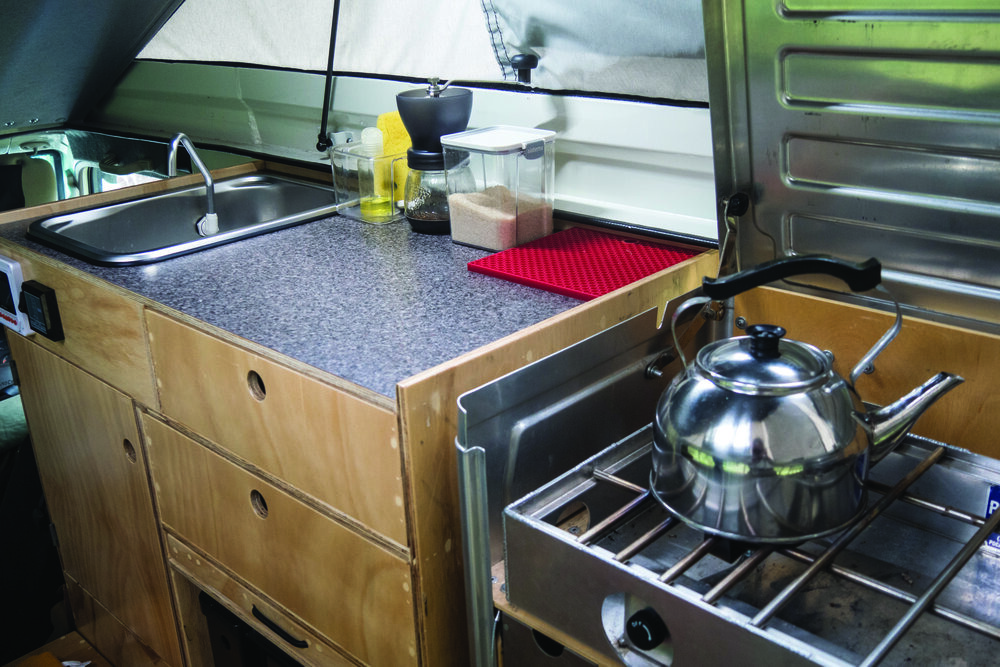 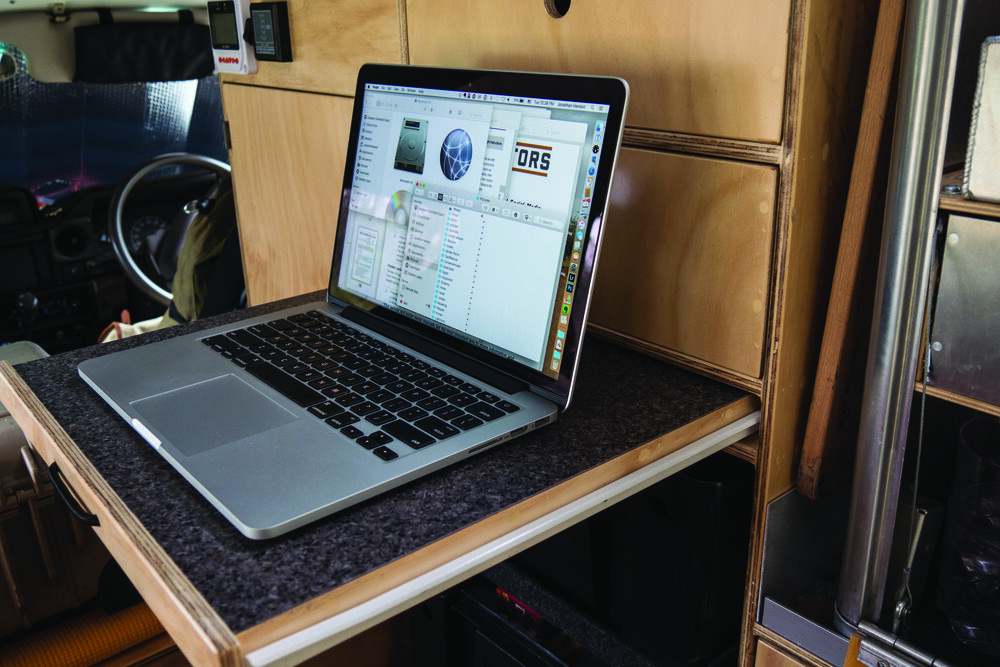 A slide-out table can be used for cooking or eating. | Photo: Jonathan and Roseann Hanson

Our last addition was a rear bumper from Kaymar, the Australian maker whose products have brought up the rear of vehicles in the Outback for over 30 years. We added two swingaways to ours. We bolted a spare tire on the right and two NATO jerry cans on the left, one for water and one for fuel. We then added a rack to hold a bulk gas (propane) bottle so it can feed the Partner Steel stove either inside or out.

The next shakedown took us across the Bass Strait by ferry to Tasmania, where we completed a semi-circumnavigation of the island. The combination of Troopy and modifications was perfect — we had a comfortable camp completely set up within ten minutes of stopping, rain or shine. The single thing we noticed was a slight rear droop on the Troopy’s heavy-duty suspension, and a bit more body lean than we thought optimal in corners — hardly surprising given our additions.

Once more Daniel had the answer, courtesy the modestly named Ultimate Suspension, just outside Sydney. Unlike most shops that would just bolt in heavier springs and shocks, Ultimate Suspension lives up to their hype by first performing a complete analysis of the loaded vehicle, including weighing each corner and graphing dynamometer readouts of shock absorber performance. Ours was . . . not bad. But the company’s techs recommended specific new springs, twin-tube gas shocks, and a product called Sumo Springs Load Share Bump Stops to provide extra overload protection in the rear. 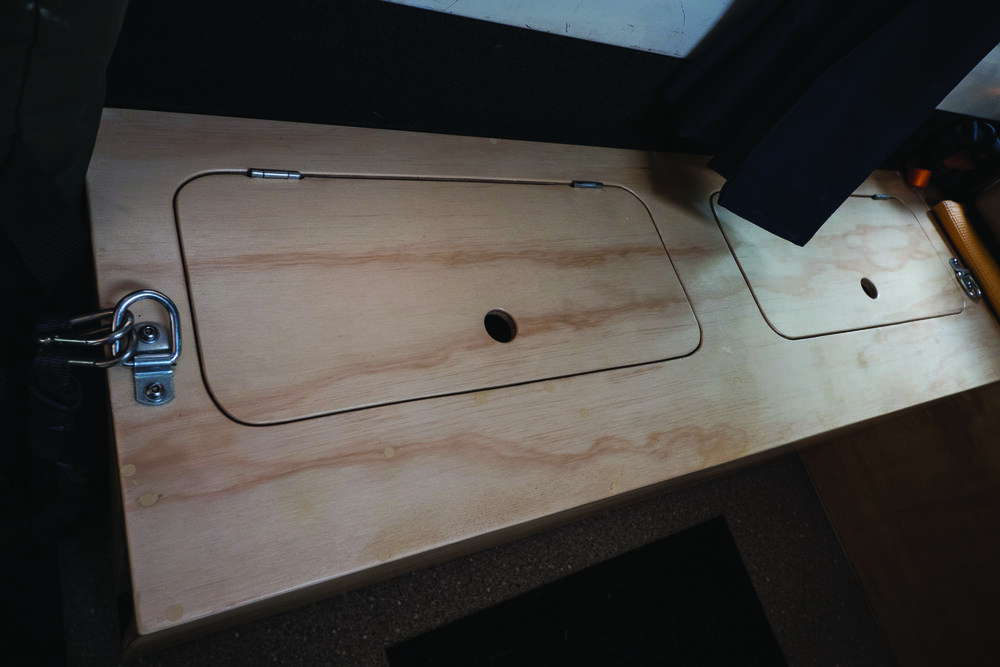 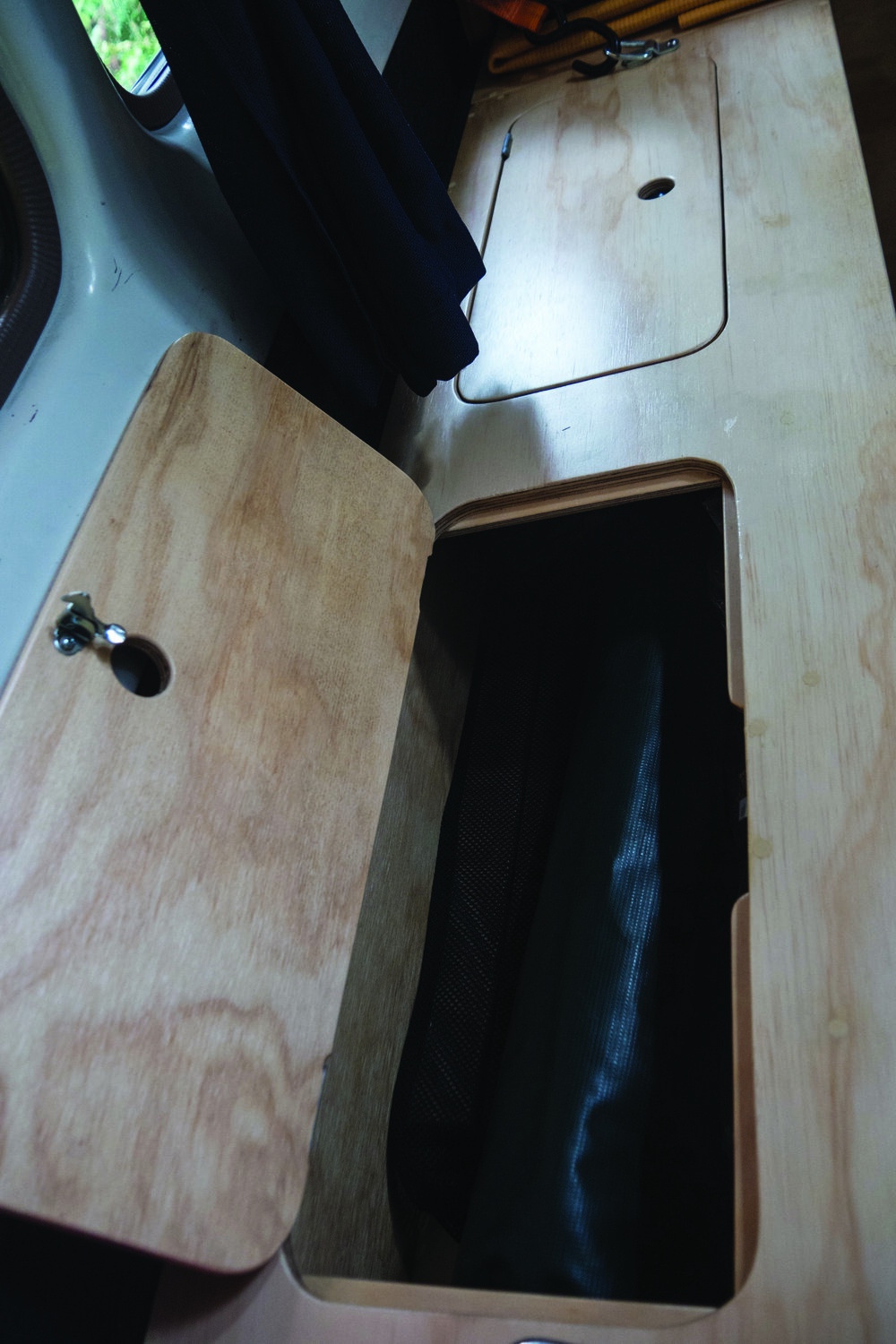 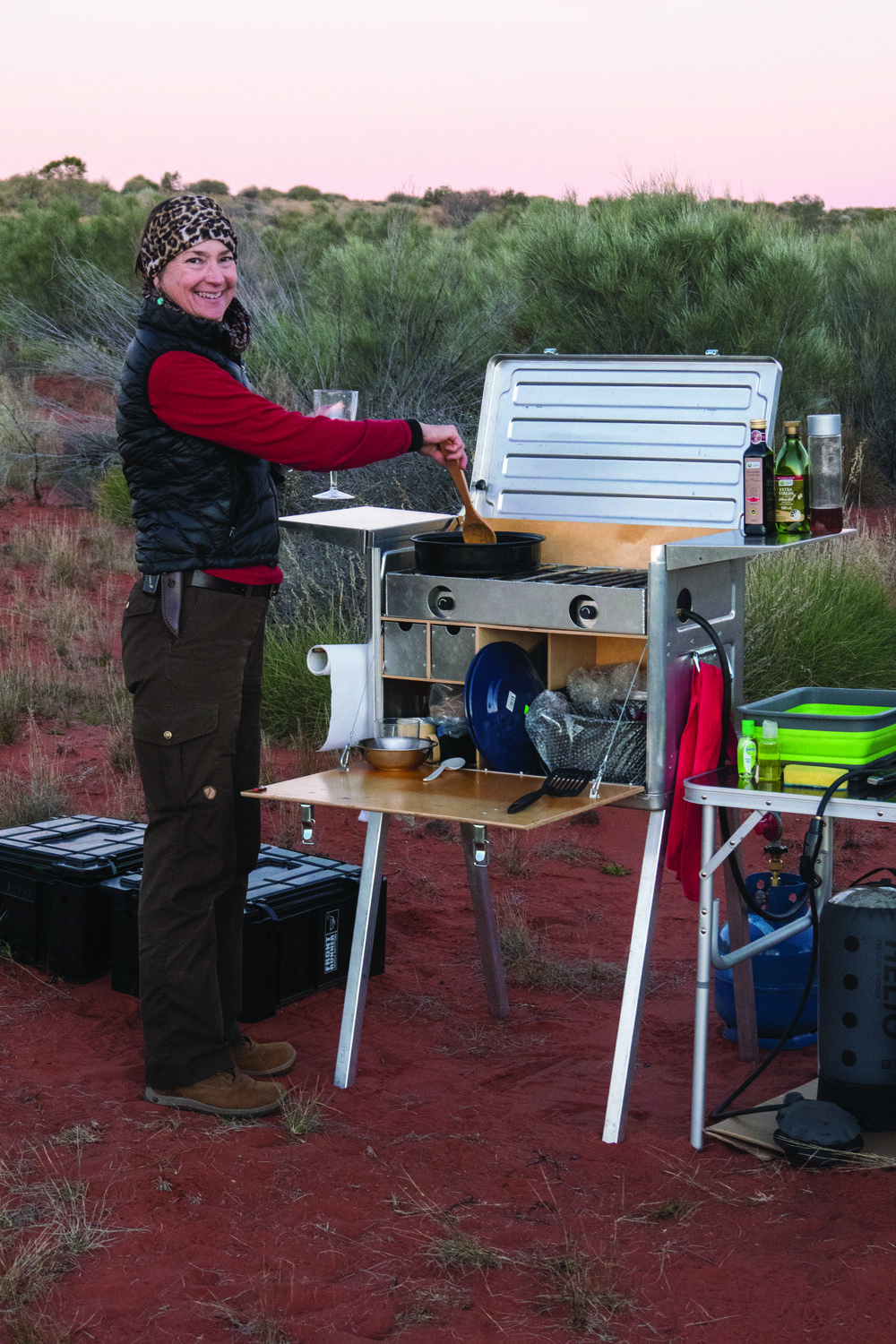 The chuck box and Wolf Packs set up for outside cooking. | Photo: Jonathan and Roseann Hanson 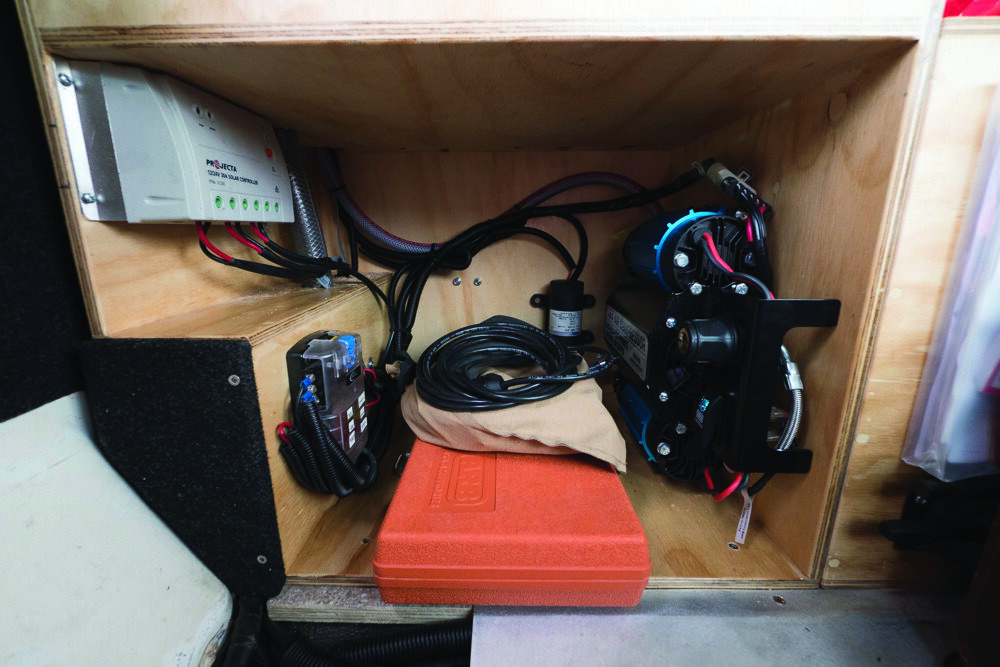 Our third trip — 3,000 kilometers on tarmac and another 3,000 on dirt through the Red Center of Australia — proved the worth of the new suspension. The ride regained firmness, the roll in corners was much reduced, and the truck sat level even fully loaded. We experienced just one issue on the trip: persistent clogging of the twin prefilters in the fuel system. Evaluation at the ARB shop in Adelaide (once we’d returned home) showed significant corrosion in both tanks, so after manager Brad Newham consulted with us long-distance they replaced the front tank with a stock factory unit, and the back one with a Long Ranger replacement, bumping its capacity from 90 liters to 180, and taking the total onboard fuel capacity to an impressive 270 liters (71 gallons) — not counting the jerry can on the rack.

We exploited that capacity the following summer (winter in Oz), when we returned with Graham and Connie to drive the Len Bedell Highway (and Connie Sue Highway) from Coober Pedy to Perth. We even got to exploit the ARB rear differential lock we had installed at the same time as the Long-Ranger. 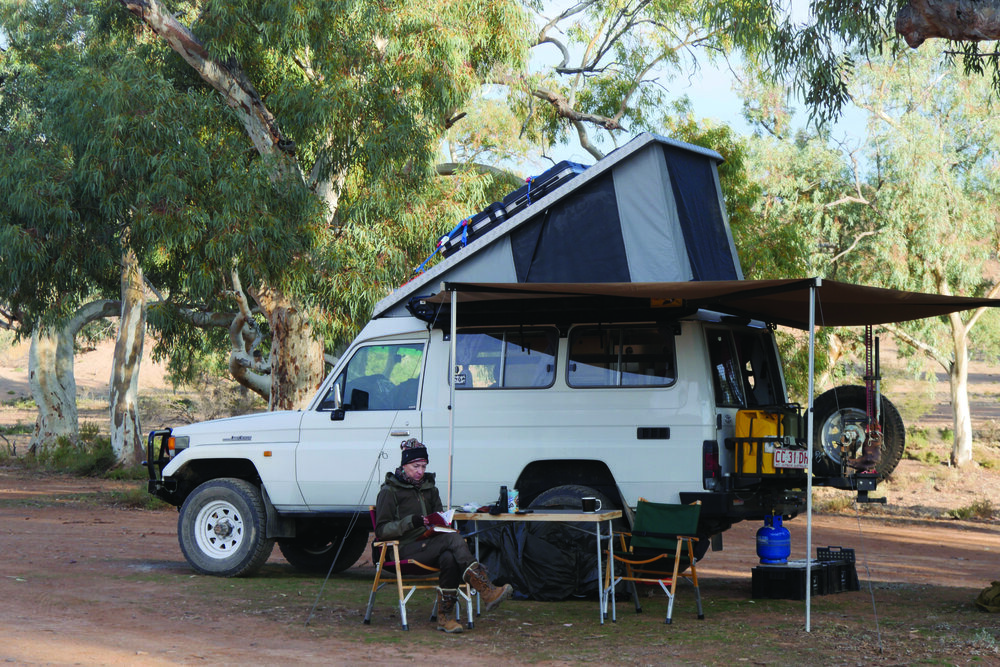 The completed vehicle in Tasmania. | Photo: Jonathan and Roseann Hanson 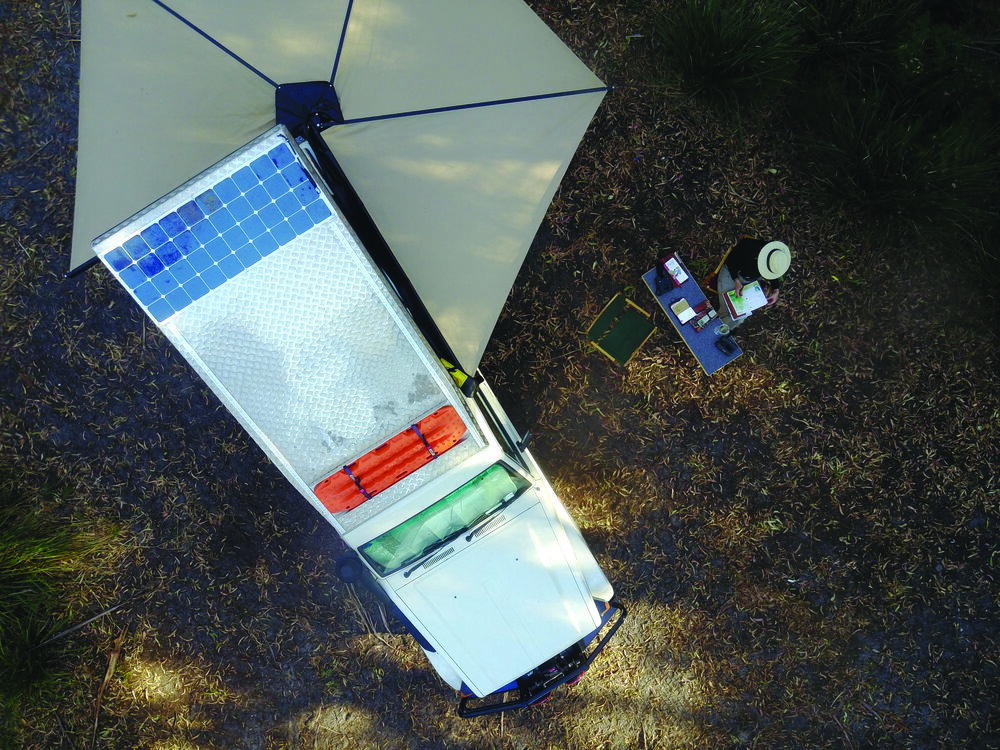 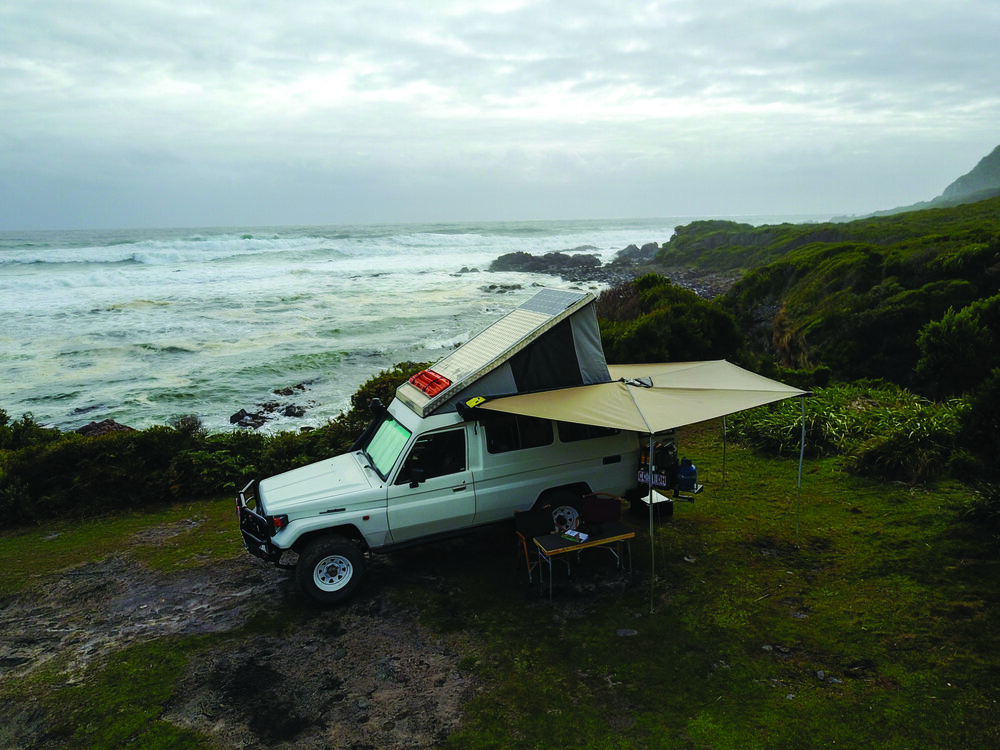 From Perth the two Land Cruisers headed (via shared container) to Durban, South Africa. There we joined them in July, 2019 for an epic crossing from one coast of Africa to another, taking in some of the continent’s most spectacular wildlife and scenery.

And that’s a story for another time.